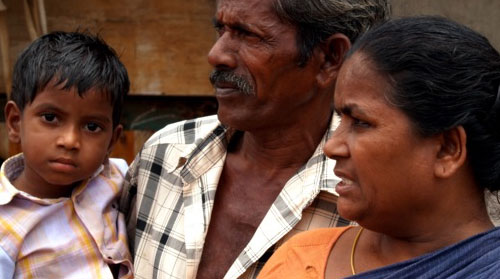 Posted at 17:20h in News by Pulse Editor 0 Comments

RICHMOND, Calif.— When Dr. Donna Guenther, a physician and photojournalist who documents AIDS orphans in India, first met Yesusbabu, an HIV-positive toddler in Vijayawada, South India, she was shocked to hear what the doctors had told his grandfather.

At three and a half years of age, he was still “crawling like an infant and could barely speak,” Guenther recalls. “He had just started taking antiretroviral drugs, but doctors had refused to treat him and had told his grandfather that he was going to die anyways.”

After intervention from aid workers, the doctors relented. “About a year and a half later, I went back to see him,” says Guenther, a 72-year-old retired allergist and immunologist who lives in Richmond, Ca. “As I was approaching his grandfather’s house, I saw this young child running towards me. The aid worker told me that that was Yesubabu. I couldn’t believe it.”

This was not the first time she had encountered a child with AIDS who had been denied treatment. An eye surgeon, for example, had refused to operate on 10-year-old Velu, who was also HIV positive, to correct a sagging in his eye.

“Globally, AIDS is now considered a chronic treatable disease,” says Guenther, who has been documenting the crisis for the past five years in her “Forgotten Faces of AIDS” project. “However, in India there is a huge amount of stigma and discrimination that gets in the way of providing support to these children.”

India has the largest number of AIDS orphans—approximately 1.2 million children who have lost one or both parents to the disease. Most are cared for by grandparents, but many are forced to fend for themselves or to take charge of their younger siblings.

“Within five years, there is going to be a major epidemic of teenage AIDS orphans in India, and about 40 percent of them will be infected with HIV,” Guenther predicts.

Orphans like 10-year-old Chakravarty from Tamil Nadu, who recently lost his mother to HIV, have a high probability of ending up as street children because relatives are reluctant to take on the responsibility of children with the disease.

But even children who are taken in by their families are at risk. Guenther tells the story of 13-year-old Veerammal from Tamil Nadu, whom she photographed over several years. The girl sold flower garlands to support her brother and grandmother.

The last time Guenther went to visit the family, she was told that Veeramal was hospitalized due to severe stomach pains and bleeding. Aid workers suspected that she had undergone an abortion, though they could not confirm it.

“Once their grandparents die, some of these children are left without a guardian, and there is a high risk of them being trafficked for sex work,” Guenther says, adding this was true for boys as well as girls and for people living in rural India as well as in urban slums.

The lack of comprehensive sex education in schools is another stumbling block to reducing the stigma for young people who are grappling with AIDS in their own lives or in their families.

“In East Africa, I saw teenagers teaching other youngsters about what AIDS is all about, how to protect themselves and the myths around it,” Guenther says. But in India, after the right-wing Bharatiya Janata Party (BJP), the country’s second-largest political party, undercut attempts to revamp sex education in schools, the subject has gone underground.

Guenther’s love affair with India started in 1987, when she first visited the country as a doctor participating in the Semester at Sea program, which takes college students around the world to explore global issues including health and human rights. Since then, she has returned to the country many times, as a tourist, a volunteer doctor to free eye clinics and as a student of Siddha yoga.

Her interest in AIDS began while she was working as an allergist and immunologist in the pediatric immunology department at the University of California San Francisco in the early 1980s, when the disease was first identified. In 2000, she traveled to East Africa, where she witnessed how AIDS had wiped out an entire generation.

In 2005, when the World Health Organization announced that the incidence of AIDS in India had surpassed that of South Africa, she was moved to act. “India had become a second home, and this issue touched my heart. I wanted to do something to increase awareness about this massive problem before India, too, lost an entire generation.”

Guenther won an arts residency from the Global Arts Village, which took her to New Delhi in 2005. There, she began photographing AIDS orphans with help from the Naz foundation.

Since then she has returned each year, despite having her own battle with breast cancer.

She traveled across Manipur, Andhra Pradesh, Maharashtra and Tamil Nadu, the four Indian states with the highest incidence of AIDS, working with community organizations such as Alliance— India, Maitri, and Vasavya Mahila Mandali.

In most instances, the women she had photographed in rural India had contracted the virus from their husbands, who were migrant farm workers, construction workers or truck drivers.

“Many of the women don’t know that they have been infected,” Guenther explained, adding that this thwarts attempts to prevent the transmission of the virus to the unborn using Neverepin, a drug that is 85 percent to 90 percent effective if mother and the child are treated at the time of delivery. In 2009, almost 18,000 newborns in India tested HIV positive despite the widespread availability of this new prevention technique.

A Disease of the Lower Castes

Guenther was also concerned that the issue of AIDS in India was being overlooked because most of those affected are from the lower castes, already marginalized by society as untouchables.

In her photographs, she says, “I wanted to primarily focus on the positive aspects of these children and adults grappling with HIV. A lot of children taking antiretroviral drugs and with good nutrition have blossomed.”

Guenther’s pale green eyes brighten as she tells the story of 18-year-old Loyangamba, a national-level Tae Kwondo champion from Manipur, in northeast India, who looks after his younger brother Malemngamba, who has AIDS.

“These two kids were living on their own after their grandfather died,” Guenther says. “Anyone who read their case file would have imagined they were living in a terrible condition. But I was really surprised when I visited them. They had a neat, cozy house, and the elder brother was working as an apprentice with the local blacksmith to care for the younger one.”

Guenther has organized several photographic exhibitions in the Bay Area and India to showcase to raise funds for the community organizations she works with.

“These photographs represent my role as a witness for these families,” she says. “Their stories deserve to be told because they are dealing with issues that some of us can’t even begin to think of. But they are living pleasantly and they are living one day at a time.”