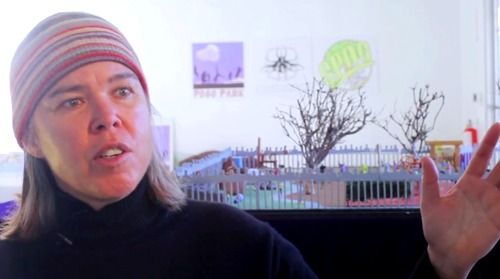 Editor’s Note: Though Richmond California has been ranked the 6th most dangerous city in the country, that hasn’t stopped residents like Toody Maher from trying to revitalize the Iron Triangle with a new community park called Pogo Park. Sean Shavers is a content producer and Min Lee is a senior editor for YO! Youth Outlook Multimedia. Malcolm Marshall is the editor of Richmond Pulse. Richmond Pulse is a project of New America Media focusing on health and community coverage in the city of Richmond. The project is supported by The California Endowment.

Pogo Park in Richmond from New America Media on Vimeo.

This year the CQ Press deemed Richmond, Calif., the sixth most dangerous city in America. One particular Richmond resident, however, is looking to change that image.

Toody Maher is the force behind Richmond’s Pogo Park: a once impoverished and gang infested area. The play area is plagued with gun violence, substance abuse, and prostitution. While working with the community and state leaders, Toody has found a way to clean it up.

In early January 2007, Maher got the idea for a recreational play area, and she figured Richmond was the best place to start. She learned the history of the violent Iron Triangle neighborhood and formulated a plan to change it. She noticed a small vacant park in the Triangle called Elm Play Lot. Residents of the area claim that on any given day the park would be littered with needles, syringes, people carrying weapons and pitbull fighting.

”It looks like a nice park [from afar.] You got these great trees, you got the play equipment. But you get in closer and figure out there’s all the hypodermic needles,” said Maher.

The park itself was in horrible condition. There were no restrooms, no water fountains, and no running water. Residents say the park was vacant because they didn’t feel safe letting their children play there. Maher knew something had to be done. She called on the people from the area and asked for support. She made her presence known in the ‘hood, attended several community meetings and visited multiple churches.

Maher’s main objective was to give the Iron Triangle community a safe and healthy area that they could build for themselves. Most of the park’s plants came from folks in the community. Maher asked residents what they wanted and what they thought would fit.

“We measured how many kids came to the park, we measured how much they move,” said Maher, “[When we transformed Elm Play Lot] we also did a neighborhood survey to figure out: is it going to improve the social capital? Is the neighborhood going to feel like a different place?”

The biggest struggle was funding the project. Knowing that Richmond isn’t the richest city, Maher looked to other sources for support. She got funding from Kaiser Family Foundation, Chevron and other local businesses in the area.

But that still wasn’t enough. Maher discovered that Proposition 84 provided $400 million to parks and recreational areas in impoverished and rundown neighborhoods. She wrote a grant and was awarded $2 million. After four years of struggle, Maher finally got the financial support she needed.

Not only will the $2 million build the park, but the money will help employ locals in the building effort.

Maher did more than just build a park, residents say: she’s given people jobs and a brighter future.

“Initially, the city had money to fund Elm Play Lot and the money was coming through the redevelopment agency. But during the recession, Gov. Arnold Schwarzenegger raided all the redevelopment funds. So our money to rebuild the park was taken away,” Maher explained.

Richmond residents are thankful that Maher got involved. Without her, none of this would be possible.

Unlike other parks, Pogo Park will have a farmers’ market, a taco truck and classrooms to help educate residents of the area. The other spectacular thing about the park is everything will be built by hand, by the Richmond community.