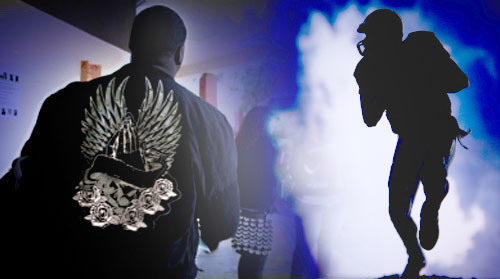 Posted at 19:25h in Education, Re- Entry, Youth by Pulse Editor 0 Comments

Kennedy High School football players JaVon Jones, Isaiah McClain and Leonard Waldon have all become star players of their high school football team. But not long ago, they didn’t imagine themselves getting off the streets. Through a series of unexpected circumstances, it was football that brought the boys out of gangs and onto a field of new possibilities.
One of them even hopes to earn a spot to play at the college level.
At 295 pounds, six-and-a-half feet tall, and only 16 years old, Waldon is the youngest player on the Eagles varsity team. The junior tackle is already getting attention from big-name universities like Boise State, the University of Wyoming, and UC Berkeley.

“Football saved my life,” Waldon said. “If I wasn’t in football, I’d probably be somewhere, probably back in jail somewhere.”

In the months before Waldon was running down players on the football field, he was running into trouble on the streets.

“We use to rob people and get into fights,” Waldon said about a robbery his gang pulled on the El Norte Bike Trail. The oversized striped polo shirt he wore outlined his broad frame and emphasized his back and shoulders. Etched into the dark skin on the back of his hands is a tattoo reading “Hot Boyz.” A scar on the inside of his left wrist serves as a constant reminder. When Waldon was 14, a member from an opposing gang stabbed him.

Senior JaVon Jones was hustling by age 12—selling drugs on the street and buying guns with a gang in Fairfield. Jones said he mirrored the examples of his older siblings in San Francisco.

“They wasn’t doing nothing but the wrong thing,” Jones said. “So I followed their footsteps until I started seeing—like I noticed—they start dying off.”

Both Jones and Waldon have spent months in lockup. Jones cycled in and out of jail throughout his first two years of high school. Before Waldon’s 16th birthday, he’d already served three months in jail and 11 months in a juvenile detention center in Martinez.

Missing holidays with his family and being separated from his gang didn’t change Waldon’s outlook. Not long after he enrolled at Kennedy, a gang video he made leaked onto the school campus and caught the attention of Kennedy High School Principal Roxanne Brown-Garcia.

Brown-Garcia had been head of Harbour Way Middle School when she expelled Waldon for gang activity. This time around she sent him to Gompers, an alternative school for at-risk students.

“I knew his mother, I knew his whole family,” Brown-Garcia said. “Things were going well when he was first coming to Kennedy. I tried to get him involved in sports the first time but he was too connected to the streets.”

So was JaVon Jones. The boy who said he would do anything to get his hands on a weapon eventually got caught using a gun in a robbery. “I was thinking, while I was in jail,” Jones said, “‘How am I going to change?’ Or if I was going to fulfill my dreams.”

A coach fathers through football

The boys’ lives began to change when they met one man who could help them get off the streets.

“Coach Byrd told me to come out for football,” said senior Isaiah McClain. “I didn’t come out the first week because I was like, ‘Man, I ain’t going to college for this.’ That’s what I was thinking.”

The running back would eventually become a starting player on the varsity team. Coach Clyde Byrd set his mind straight, McClain said, and taught him to be humble and to put schoolwork first—a lesson that had side benefits.

“Football helped me and motivated me to keep my grades up because, you know, I get to play, get to travel, get out of school early sometimes, so I was like, ‘I’m gonna play football,’” McClain said, laughing, as he made eye contact with Waldon and Jones at the table inside the teacher’s lounge.

Byrd said the stories of McClain, Waldon, and Jones depict the inner-city trap that ensnares young boys when their fathers are incarcerated. All three boys’ fathers have been in prison for some or most of their lives.

Authors Jeremy Travis and Michelle Waul have researched the impact of fathers in prison for a book published by The Urban Institute, a nonpartisan organization analyzing the problems facing America’s cities. In a 2004 nationwide study, Travis and Waul found 55 percent of prisoners in state facilities reported having at least one minor child at home. Almost all incarcerated parents—93 percent—are fathers, and nearly half are African American.

Christopher Wildeman, assistant sociology professor at Yale University, offers another perspective. “One in four African-American children can expect to have a parent imprisoned before they turn 14,” Wildeman wrote in an email, citing his dissertation research on young children whose fathers are imprisoned.

Leonard Waldon said he’s never seen his father, who has been in prison for years. Waldon’s 17-year-old brother is also serving time, at Byron Boys Ranch Rehabilitation Center in Pittsburg.

The person who consistently followed Waldon outside the hallways of Kennedy was Coach Byrd. “He was still checking up on him at Gompers,” Brown-Garcia said. When Waldon was ready to come back, Byrd vouched for his sincerity.

“I could have said ‘no,’” Brown-Garcia said, “but he had made some remarkable changes with his grades and I haven’t been disappointed at all.”

When Waldon speaks about football, the words come pouring out of him. As soon as the subject sways to Coach Byrd, Waldon slows down. He speaks softly, picks at his fingernails, and pauses as he looks up toward the ceiling between each thought.

“He really did everything to get me in this school.”

“I really thank Coach Byrd for that,” Waldon said. “Man, without him, I don’t know where I’d be.”

Byrd’s teacher ID hung low around his neck as he sat in the teacher’s lounge. His deep voice dropped when he spoke about how he could have gone down the same route as the boys he now coaches, without the support of his own family.

“It was me 35 years ago. When I was 16, my father passed away and it was just me and my mother,” Byrd said. “We ended up moving to the projects and that’s where I did two wonderful years, living in the projects of San Bernadino.”

Byrd said many of his friends followed that pattern of using the streets to find the leadership that absent fathers couldn’t provide. “A lot of them are dead or are in jail or strung out on drugs,” Byrd said, looking down and rubbing his hands together.

Now Byrd is giving Jones, McClain, and Waldon an opportunity to end up someplace they can use their skills—someplace other than where they were headed.

“When I met Coach Byrd, I just told him my situation. He understood. He didn’t downgrade me or look at me differently,” Jones said. “Coach Byrd opened the closed door for other male role models in my life.”

The boys have another common thread holding their lives together—strong mothers.

Since a large percentage of incarcerated parents are African-American fathers, mothers or other relatives raise the children at home.

McClain says it was his mother’s support that first opened his mind to the idea of playing football.

Prior to enrolling at Kennedy, McClain was suspended from a middle school in Fairfield for his involvement in a gang riot. He could not return to Fairfield and his mother urged him to get his life in order, and focus on school and football. The pair moved to Richmond.

“My mom says handle your schoolwork and she’ll handle the rest,” meaning clothing, food, and a warm place to sleep at night.

Jones said his relationship with his mother is comfortable. “I can talk to my mom like she’s my friend because she’s going to understand everything that I have to say, whether it’s good or bad. She’s going to tell me what’s the right thing to do.”

Come graduation day, Jones said, he’s looking forward to walking across the stage and making his mother proud. Eventually, he plans to head to college to become an accountant.

“I really want to thank my mom because she’s the one who’s always been by my side,” Jones said. “She did so much for me, it’s like, I want to do for her now ’cause I’m grown.”

For the first time in their academic lives, Jones and Waldon have made the honor roll, which requires a 3.0 GPA or higher. Jones is still coming back from the edge. He started the football season wearing a tracking monitor strapped around his ankle, for a gun possession charge. Jones said he wore it all season, to every practice and game.

His advice for kids who feel they can’t escape the lure of the streets: make the change regardless of the struggle.

“It’s not a life you should be proud of,” Jones said. “My hardest time, like, sleeping outside, always going from friends’ house to friends’ house, not having no money to feed myself, always having to do wrong.”

Brown-Garcia said a lot of students at Kennedy are coping with societal problems. “Just like many of our kids that reside in the city of Richmond, they are struggling with poverty. It’s an issue in Richmond. It has one of the highest crime rates,” she said. “In spite of that, they are extremely resilient and accomplish a lot of great things.”

McClain is looking ahead to applying to college, where he plans to major in psychology. “I want to talk to people because I’ve been through a lot and I feel if somebody told me their problems I could help them.”

Waldon will be back on the football field at Kennedy next fall, hoping his skill can get him a college football scholarship. He, too, wants to earn a degree in psychology.

“I did change. That’s what people don’t understand. I’m a changed man,” Waldon said. “I don’t hang out with my old friends anymore. I just be by myself. Football, sports, do my work and get them good grades in.”

JaVon Jones, Isaiah McClain and Leonard Waldon all spoke about how they could have easily ended up dead or in prison, before football gave them a glimpse of a better life–one that doesn’t involve crime.

“I always knew I had potential,” Jones said. “I just never followed it.” Jones was speaking about himself, but he could have been speaking for all three of the boys.