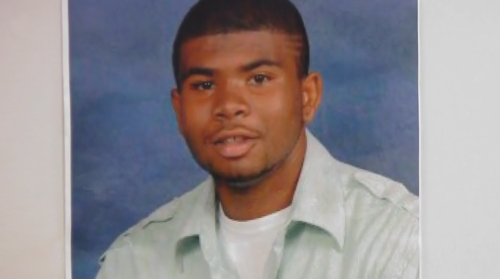 Editor’s note: The first murder of 2011 in the 6th most dangerous city in America started with a fist fight and months later ended in Gene Grisby, 16, being gunned down in front of his grandmother’s home in Richmond, Calif. On Thursday, two suspects – the alleged shooter and driver of the vehicle he was riding in – were arraigned in Contra Costa Superior Court and charged with murder. Students at El Cerrito High School are stunned and disheartened by the loss of their friend and classmate. Sean Shavers is a content producer and Malcolm Marshall is a senior producer at New America Media.

El CERRITO, Calif. — Gene Grisby was a good student, well liked by his peers and an up-and-coming football star at El Cerrito High School. I was outraged when I heard the news about his murder; I didn’t want to believe that someone would do something like this. But the real tragedy was the age of the suspects. The people who are being accused of killing Grisby are between 16 and 19 years old. Not only has a young man died; two others will now be sent to prison, possibly forever. It’s a shame to see teenagers lose their lives to the prison system, a total lose-lose situation.

I decided to drive down to El Cerrito High to get an insider’s view on what happened.

There was a lot of emotion in the room and you could see hurt on students’ faces. One girl cried. The faculty was crushed over the loss and couldn’t imagine Gene being a murder victim. The classroom was so silent that you could have heard a feather hit the ground. Yet, when the students spoke about Gene, they all had positive things to say.

“Gene wasn’t involved in anything (bad). He was so cool,” said one.

“(The shooter) was just a sucker who couldn’t handle a fight,” said another.

As it turns out, Gene had gotten into a fight with another student about a year ago, and it was that same student who shot Gene on Monday.

That statement about “not being able to handle a fight” stuck with me while I conducted the rest of my interviews. When does a fight turn into murder? When and why do we actually cross that line?

Gene’s cousin, Charelle McAdoo, spoke about what the family was going through. That Gene is no longer here, she said, is a shocker. Some family members can’t, or are not ready to, believe it. Charelle says the murder has left her numb. It does not yet seem real to her.

Another classmate had sent Gene a text message, just hours before his death. “I had to delete the text because it would kill me inside (to see it),” she said. The girl was only 16 years old, and she shouldn’t have to experience this kind of pain.

Before I had gone down to El Cerrito, I had no idea these kids were so broken up. You truly don’t think about what type of baggage other people are carrying, what type of stress youth are under these days.

I asked the students if they thought the violence was ever going to stop, and every response was the same: no way. It sounded like there was no hope, as if people had given up, as if peace was not an option.

But then they told me that the principal of the school brought up the idea of organizing a peaceful student march to stop the gun violence happening throughout El Cerrito and Richmond neighborhoods. So even through all this, students were still thinking positive.

He will be greatly missed and his love will live on.