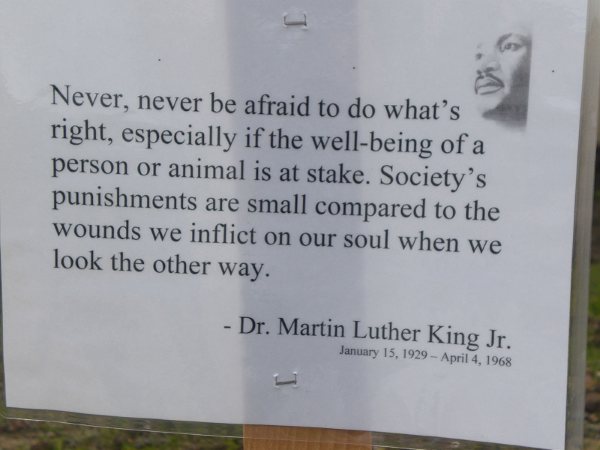 Posted at 13:11h in News, Youth by Pulse Editor 0 Comments

Just days after 16 year-old Gene Grisby was gunned down in front of his grandmother’s home in Richmond, California – becoming the city’s first homicide of 2011 – over 400 school children rallied for peace on the Richmond Greenway, a stretch of hiking trail on the southern border of the Iron Triangle neighborhood.

The rally was just one of several events in recognition of the Martin Luther King Jr. holiday, which included the city’s fourth annual Peace March, where children and young adults carried signs demanding their right to live in a peaceful neighborhood.

One of the highlights of the event were the mud balls, filled with seeds, that the school children were given to throw onto the soon-to-be “edible forest” being cultivated on the Richmond Greenway. The forest project is being sponsored by Urban Tilth, a Richmond non-profit committed to urban farming.

“You are planting seeds of peace,” said Doria Robinson, executive director of Urban Tilth, who gave a powerful and empowering speech to the children. Then, over a hundred balls flew in the air, landing on the empty patch of grass.

After the ball toss, the children continued their peace march down the Richmond Greenway to Lincoln Elementary School. Once they reached their destination, the children had a ceremony and a number of performances began. The children sang, danced, and recited spoken word poetry. Mayor Gayle McLaughlin also attended the event, and gave a speech to the children.

As a young person living in Richmond, I can say that the Peace March was the most powerful event I have ever attended in my city. The energy of the children was unbelievable; it was an epic moment for me to see them demanding peace and chanting together until the end, despite a long day of marching. I have participated in other marches, but this one was the most energetic, memorable and empowering. At least on this day, a diverse group of people in Richmond had come together, all standing against the violence that has given Richmond the unfortunate reputation of being the sixth most-dangerous city in America.