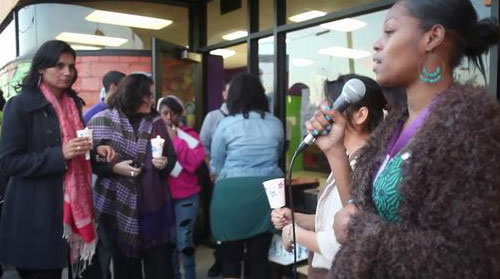 Editor’s Note: With two lives lost in the first month of 2011, Richmond CA’s RYSE Center is working with the youth to cope with the tragic loss to their community. Min Lee is a senior editor at Richmond Pulse.

How does a community react to the loss of a young person? Do we react with violence, anger and hate? Or do we take it a step further and seek revenge? For now, all we can do is hurt and mourn the death of our beloved youth member,Tyree Brown.

Tyree Brown was a wonderful, energetic young man. Everyone that he came in contact with couldn’t help but crack a smile at least one time while they were with him. Day after day, he would come into the RYSE Center (a teen center located in Richmond, CA) ready with a new rap to record or a new beat to make. Ready to basically face whatever came his way. He was and will always be the “roasting champion” in the RYSE Center, as far as the members are concerned.

Tyree was not just a wonderful person to be around, he was also a straight A student at John F. Kennedy Senior High School. Around the hallways, every passing period you couldn’t help but hear Tyree’s distinct voice and laugh; it could be heard from a hallway away. His big smile lit up the room and couldn’t no one take his shine. But the shine was soon to end.

About three weeks ago, our beloved friend Tyree committed suicide at his Richmond, California home, off of Cutting Boulevard. He hung himself. When news of this spread to the RYSE Center, we were absolutely devastated. Loosing Tyree was like loosing a part of ourselves. Though heart broken and grief stricken, the RYSE Center knew that they had to do something, to help the grieving youth that surrounded the center. They decided to hold a candle-light vigil for our dear Tyree Brown.

At the vigil, there was mostly complete silence surrounding the outside of the center as we stepped out to light our candles. One by one, people from the crowd would get up to share happy memories they had of Tyree, and how they wish they could have one more moment with him. With one of the most popular songs he wrote playing continuously throughout the evening, there was not a dry eye. You could feel in the air how hurt people were, and the sadness they were experiencing.

There’s no way to bring Tyree back or make everything okay. All the RYSE center could do was be there for each and every person that needed them, and that’s exactly what they did.

Although the reason Tyree committed suicide is still unknown, we can only try to move on. But the youth at the center can only move on so far. Though it seems most have already forgotten about the situation, there are still a few of us who can never forget it, and never forget him.

Tyree was a role model and at the RYSE Center as well as everywhere he went. So for the first of many more times, we say, “Rest in peace, Tyree Brown. You will forever be missed.”