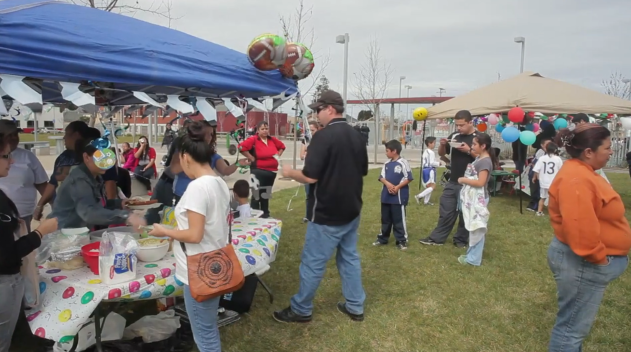 22 Mar Re-Open it and They Will Come: Youth Descend on Newly Open Richmond Community Center

Posted at 13:48h in Arts and Culture, News, Youth by Pulse Editor 1 Comment

On Saturday, March 5th community leaders celebrated the grand re-opening of the Nevin Community Center, located at 598 Nevin Avenue in Central Richmond. The community center did not have a lot of programs for the community, which is one of the main reasons for the re-opening.

“Nevin has not had the best reputation throughout the city,” said Alice Nightengale, community Develop project manager, “I’ve heard from community members and they’ve expressed to me that they didn’t feel safe coming here.

Volunteers began arriving at 9 a.m. and were given a tour of the community center and were shown the new state of the art technology boar. They were also tasks for the day, from managing the bounce house to giving people directions.

The event went full blast at 11:00 a.m. when the Richmond Police Activities League’s soccer and baseball teams marched down to the center; which attracted more people to come out. There were also many important city officials, including the mayor and the city manager. There was a variety of presentations and performances. Many new programs such as cooking classes, parent computer training, pre-school classes, and much more were introduced. People from all ages were able to sign up.

Nevin Park was filled with kids of different ages. The bounce houses as well as the playground packed with so many young people looked like paradise. This was amazing since the park is known for not having any children running around for the condition it was in (graffiti, trash, and loitering). Therefore the results of all the hard work the community put in this project was very evident. The Center, as well as the park, was much cleaner. The atmosphere felt safe despite the reputation of violence this area is known for. It pleased me to know we will see Police officers riding bikes in this area making many residents of the community feel safe to walk around the park area.

In my eyes, these improvements are a huge step for a better community. I did go to the Nevin Center before these improvements started happening but there were no real programs for young adults to participate in. I plan to volunteer on a Saturday for the Opportunity West Autoskills where kids from 3 to 15 years old are able to do arts and crafts and practice their computer skills.

“The city has refurbished this facility, brought new programs in and changed some of the layout to make sure that’s it’s a safe environment in the community,” said Richmond Police Captain Mark Gagan. “[People can] come down here and have job training, computer training and then there’s arts and crafts and some programs for kids.”

Now with the new educational and community programs being offered I am definitely going more often to explore what the center is offering. Also knowing that the community center is going to have security and won’t allow people to loiter there will make my whole trip to the Nevin Center better.

Nightengale hopes this event will encourage more residents to take an active role in the Nevin Center. “The main thing that we hope to get out of this is that we want to get community members to come into their community center and really take ownership, [and] that this is a positive part of their neighborhood. We really would like to see high attendance in all of our programs.”