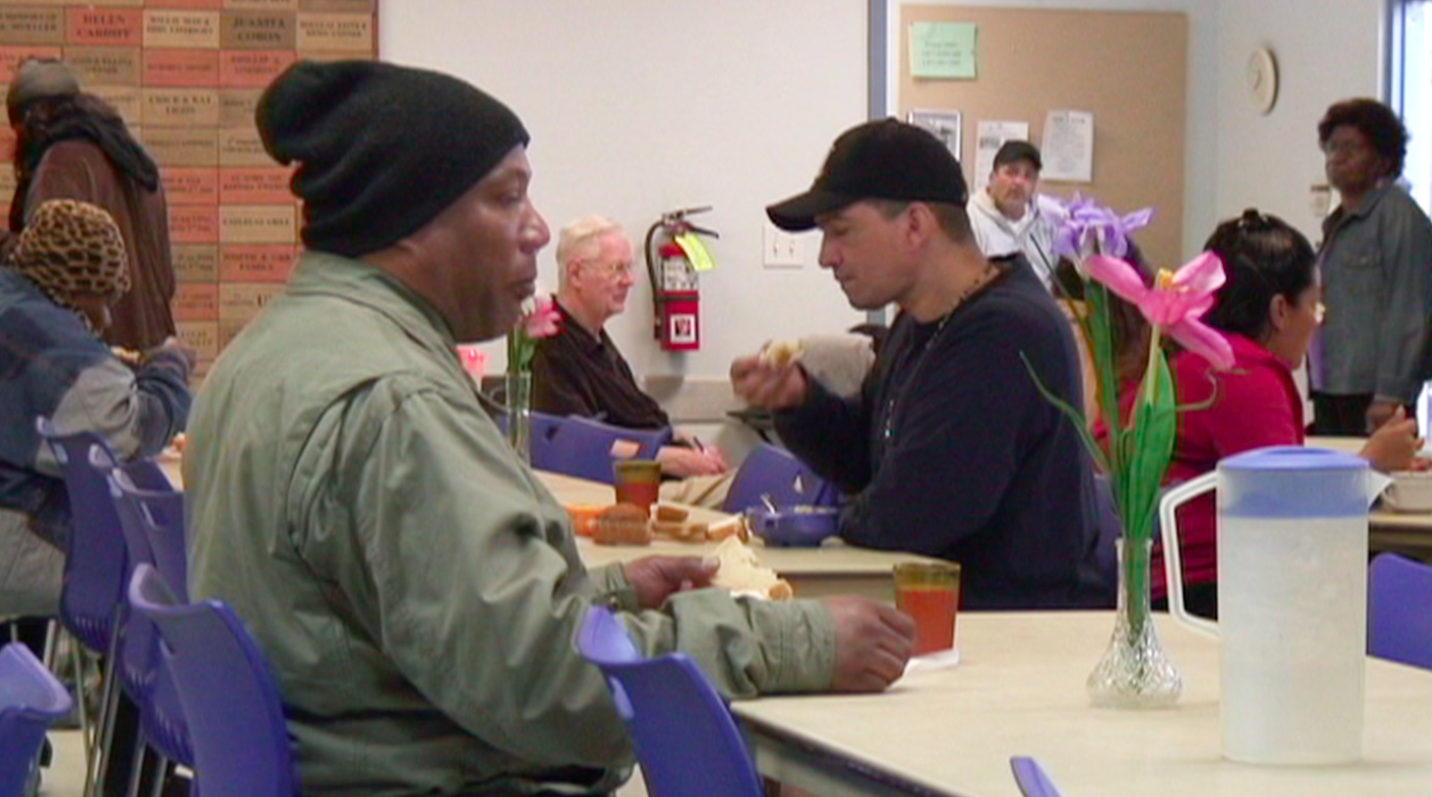 16 Apr Getting a GRIP on Homelessness

Posted at 15:26h in Elders, News by Pulse Editor 0 Comments

RICHMOND, Calif.—For Richmond’s low-income families, for whom the threat of homelessness is an ever-present reality, a free meal or rent money between jobs can mean the difference between staying afloat and losing everything.

Greater Richmond Interfaith Program (GRIP), a nonprofit in the heart of the city that that’s been helping homeless people and those at risk of becoming homeless for more than 40 years, is one of the few places to which they can turn.

At GRIP’s Souper Center just after the lunch rush, baby seats line the wall with bits of soup still fresh on them. Volunteers push blue chairs into place and wipe the tables clean.

More than 200 people visit the Souper Center every day, 365 days a year, for lunch served by GRIP’s dedicated volunteers. In another part of the building, a resource center offers showers, phones, and washing machines to help about 150 people a day meet their basic hygiene needs.

“People are floating in and out all the time,” says Kia Croom, GRIP’s program director, who joined the organization last July after doing similar work in Atlanta.

GRIP’s newest program offers assistance to Contra Costa County residents who are having trouble making their rent payments or have lost their apartments because of the economy. The nonprofit receives about 30 applications a day from all kinds of people, most of whom who have fallen two or three months behind on their rent.

In the past, GRIP’s initiatives have ranged from rape crisis centers to farmers’ markets, but these days its main goal is to prevent homelessness by making sure that people who have existing housing are able to keep it. More and more of the nonprofit’s clients are people with jobs and families. “We had a case [recently] where an older couple found themselves homeless with a one-year-old [grandchild],” Crooms says.

Contra Costa County has more than 5,000 homeless people, Croom estimates. “The city of Richmond by far has the most vulnerable and needy” community of homeless, she notes.

But homelessness is much more widespread than many Contra Costa residents realize—or want to admit.

One reason they’re coming to GRIP is that budget cuts have made it hard for many service providers and shelters elsewhere in the county to keep their doors open, even as the demand increases every day.

GRIP has done as much as it can to fill in the gap left by those nonprofits. Still, “we are feeling the [economic] shocks here [as well],” Croom adds.

At a time of massive budget cuts, GRIP has been able to keep going by shifting its dependency on public funds to private donations. This can be tricky because it requires constant fundraising and tending to relationships with donors.

Thankfully, many community members have been more than willing to help out, even when they have no money to give. Some 44 congregations of many different faith and ethnic backgrounds support GRIP by donating supplies and volunteering their time.

“They’re bringing spices and things that we need,” Croom says. “They’re bringing themselves and helping to prepare meals…. We’re managing to offset the shocks with these volunteers and donors [who] have been able to help us during these very tough times.”

Thanks to their efforts, GRIPS’s family shelter is able to house about 20 families, or 60 or so people, a night. About half of those clients are children.

Meanwhile, the Homeless Prevention and Rapid Re-housing Program (HPRP) helped 81 families pay their rent in 2010. This year, the program is on pace to spend $60,000—provided by government agencies—to help to keep Richmond’s residents in their homes and off the streets.

But after that money is used up, the rental assistance program will no longer be available.

Croom says low-income people in Richmond should visit the website, www.gripcommunity.org, to see if they are eligible to apply.

One day recently, a single mother, who didn’t want to be named, said that without GRIP, she and her young daughter would have nowhere else to go. They eat lunch at the Souper Center every day and sometimes use the showers.

“I love this place and I think lot of people do,” the woman said, looking at her daughter.  “It’s really important to Richmond and its residents.”