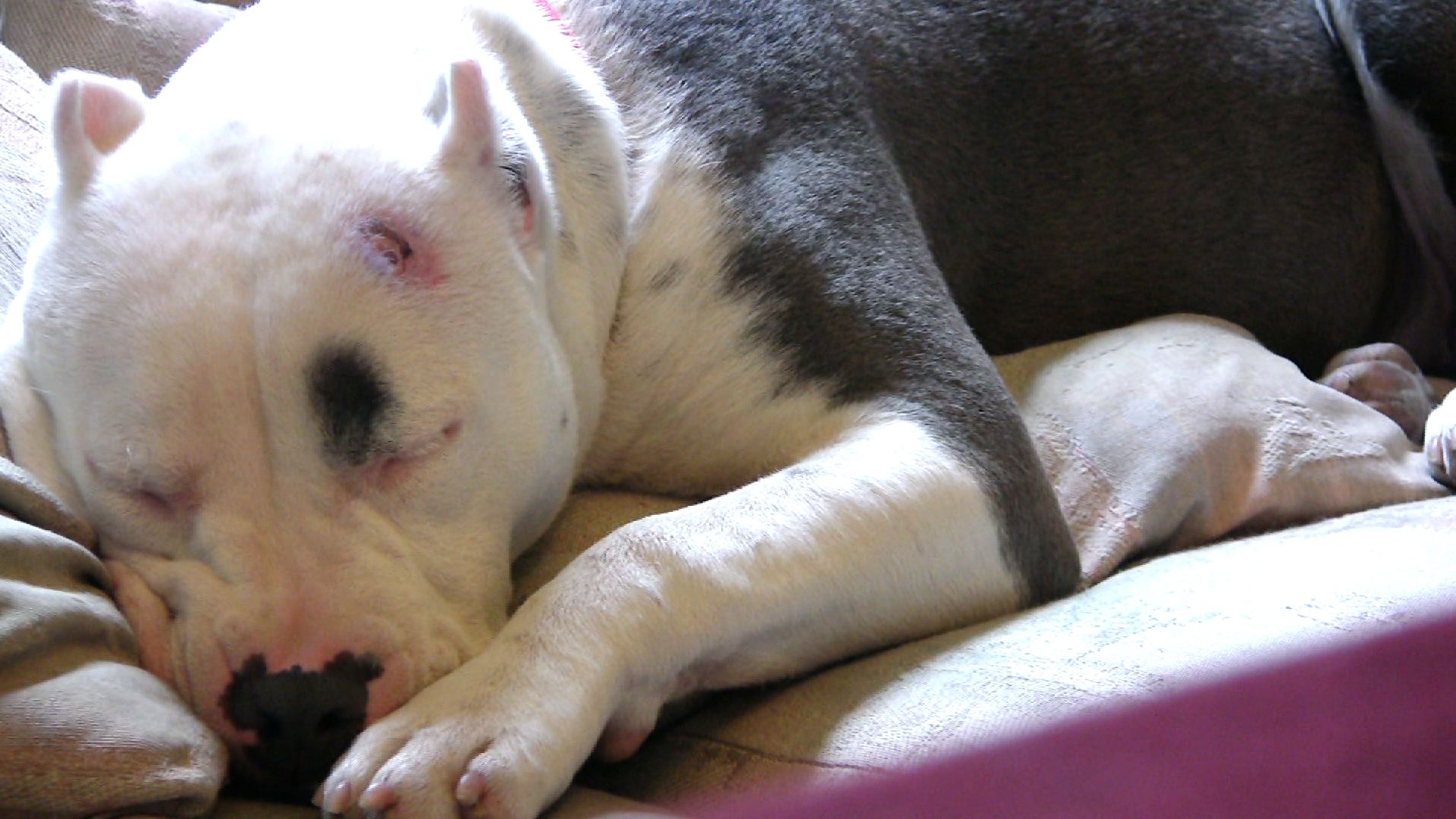 Posted at 00:06h in Arts and Culture, Youth by Pulse Editor 2 Comments

RICHMOND, Calif. — It’s raining in the Iron Triangle. A skinny white pit bull, with no collar or tags, is running down the block. The dog’s thick muscles flex in the rain, as he slowly jogs by. Sniffing the ground, perhaps looking for food or somewhere warm to get out of the rain, it’s clear he’s on his own.

The other dogs living on this block – Luna, Poncho, Mister Brown and Dice – are much more fortunate. Unlike their stray counterpart, they have an owner, 20 year-old pit bull enthusiast, José Juan, who loves and cares for them.

Looking after four dogs is a handful, but Juan says he isn’t the only one in his neighborhood responsible for multiple canines. On his block alone, there are eleven dogs that he knows of.

“Right next to us there is a pincher, (and in the house) right in front of us there are two rottweilers that are used for guarding the house,” says Juan. “Further down the block they have pit bulls and a couple of German shepards. There are six German sheppards on the block, so it’s pretty intense.”

Juan says he’s lucky to not have any kids, because most of his time and money goes straight to his dogs.

“I buy them a forty-four pound bag for a week. So that’s one hundred and sixty pounds of food a month,” he said.

There are other expenses, too, like veterinarian bills and regular cleanings. But it hasn’t always been that way. When Juan got his first dog, Dice, he didn’t know how to train or take care of him, but he was determined to learn. Juan says he didn’t want his dogs to look like some of the others he regularly sees in Richmond.

“Richmond has a lot of pit bulls. Many of them are skinny, dirty and very aggressive, which means people don’t take them out and socialize them,” he says.

Juan began surfing the Internet for information and purchased some books on dog care. He even watched occasional episodes of the television program The Dog Whisper, to pick up tips.

Mr. Brown, his bullmastiff, used to be a neglected guard dog. His previous owner only fed him once a week, when he would come from San Francisco to Richmond to check on the property he owned there. As a result of the neglect, the dog developed all sorts of behavioral problems by the time Juan got a hold of him and fixed him up.

“At times, the dog is living outside, attached to a chain all day, with no water (and) no food. That’s when the dog starts to experience loneliness, and becomes aggressive over food, (or) over the people that roam around the house and other dogs,” said Juan. “So, it’s basically a problem with the people, not the dogs themselves. It’s the people not taking care of the dogs.”

Juan makes it a point to socialize his dogs. He and his friends get together to show off their pit bulls from time to time. Juan says he loves the breed and loves training and taking care of them, so much that he even helps his friends out with training their dogs, when they ask him to.

Sometimes Juan and his dogs go to the dog park at Point Isabel, a huge green area with trees and paths. The park offers a beautiful view of the Golden Gate Bridge and sits right on the border of Richmond and El Cerrito. People from all over the Bay Area bring their dogs to run free at Point Isabel, where the dog park has gained national notoriety as one of the best in county.

At the park, Juan chats and swaps tips with other dog owners. He says being around others is a good way for Richmond’s dog owners to learn about their dogs and stay connected to the greater dog-owner community. In fact, Juan believes the community aspect of owning dogs is key to taking care of them. All it takes, he says, is the will to offer a better life for your pet and in the process, your community.

“I’m not perfect, but I try my best. It’s the matter of trying. If you don’t try, you ain’t gonna get it done.”