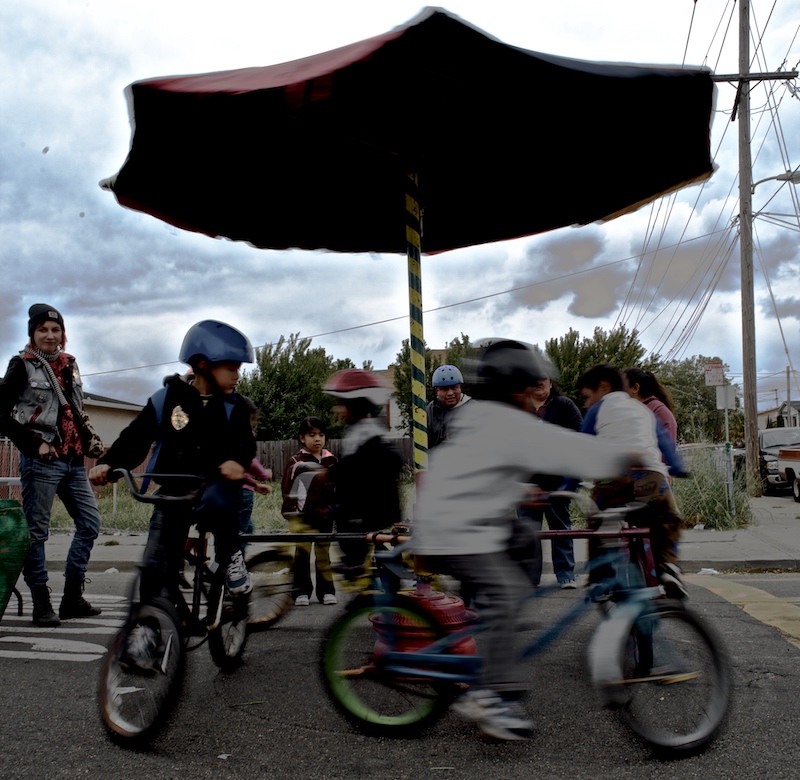 26 May Bike Fiesta in Richmond

Posted at 17:00h in Arts and Culture, News by Pulse Editor 0 Comments

On May 14, 2011, Building Blocks for Kids (BBK) hosted their first “Bike Fiesta” at Lincoln elementary. Although the weather wasn’t as pleasant as expected, families and volunteers still showed up and joined the fun. The event was organized specifically for the Iron Triangle community, and was a way to show residents that we don’t need to just use cars as transportation — we can use our bikes.

There are many bike paths and walkways in the Iron Triangle that were made for that purpose, but the community doesn’t take advantage of them because no one encourages them to go out there and use them.

Many families who do have bikes don’t use them, due to the fact that their bike is broken or has flat tires. BBK thought of this, and decided to set up a stand at the event for bike fixing. Thanks to Mikes Bikes, three such bike repair stands were set up. For each, there was a line of people patiently waiting to get their bikes fixed, and everyone left happy because after such a long time they could finally ride their bikes.

The Richmond Police Explorers also attended the event to support BBK, by hosting a relay race and helmet give-away. The relay race went around the grass area of the schoolyard. There was a track with six lines. The kids would line up and ride their bikes around the track. If someone was riding a bike and wasn’t wearing a helmet, a police explorer would stop them, take them to their stand, and give them a helmet for safe riding.

BBK invited 200 families, but after counting the families registered, they had over 450 families. This event was an opportunity for the city to see that people do enjoy riding bikes, and that they want to ride safely around the city.

All families who registered were also automatically entered into a free raffle. The raffled items were donated to BBK to be given out to the children and families who attended this event. At the end of the day, many Richmond families left the event with brand new bikes, helmets, gift cards, and tomato plants.