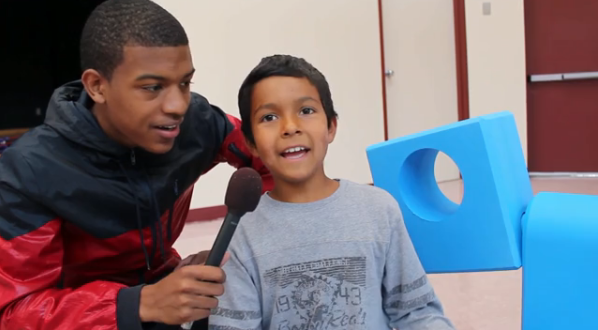 Posted at 15:42h in News, Youth by Pulse Editor 0 Comments

There are only 150 Imagination Playgrounds throughout the country, and thanks to Rockwell and his firm, Rockwell Group, and their Partnership with KaBOOM!, these playgrounds are being brought across the country.

Richmond is the latest city to receive the playground. Its currently located at the Nevin Community Center in Central Richmond and will be rotating monthly to the city’s eight community centers.

Imagination Playground reminds me of legos, only that these pieces are ten times bigger. The parts vary in sizes and shapes. By having a variety of shapes it influences the children to use their imagination and be creative. They can create their own little utopia with this playground.

Was this playground brought to the Nevin Center because of the awful killing of a young man only a few weeks before? Ranjana Maharaj, who also works for the Community Development Project, says the Center was already planning on introducing Imagination Playground the same week that the young man got killed in front of the community center. Thankfully children here will be the first in the city to have a chance to play!

Imagination Playground is a different type of playground, it’s a playground where a kid can use his/her imagination to construct and figure out ways to solve problems. Not only are they having fun, but they are learning life experiences such as problem solving and if one day they want to become an architect they already have a head start in designing.