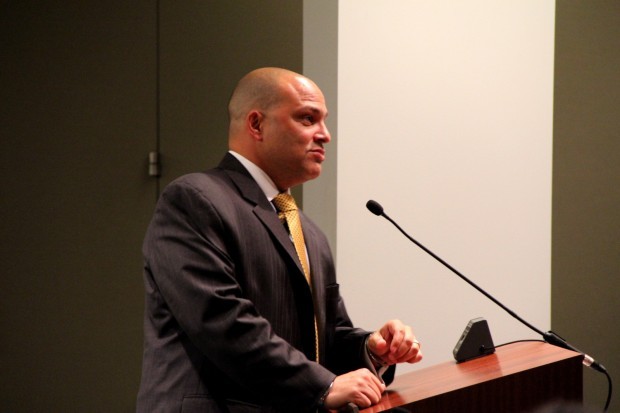 Posted at 08:45h in News, Youth by Pulse Editor 1 Comment

Office of Neighborhood Safety staff and supporters spoke publicly Monday night about the details of the fistfight that broke out among seven young men on October 14 in City Hall and what the altercation means for the future of ONS. In a nearly two-hour discussion at the Human Rights and Human Relations Commission meeting, they pointed to a failure of communication between the group and the Richmond Police Department directly following the incident, saying that the relationship needs repair.

Lynette Gibson McElhaney, LaVerne Vaughn and Eugene Jackson represented Ceasefire at last night’s meeting. They discussed how the October 14 fistfight has impacted their progress and how they hope to initiate the program soon. (photo by: Wendi Jonassen)

“I know there are probably many questions about the recent events in our office,” ONS Director DeVone Boggan said. “So I wanted to speak to those.”

The men who showed up in City Hall were “unannounced and unexpected,” Boggan said. The young men spotted each other in the City Hall parking lot where tensions mounted until, once in the ONS suite on the building’s third floor, a fistfight broke out. The scuffle lasted about two minutes, Boggan said, after which about half of the group lingered while others left the building. Boggan confirmed that one of the men broke his nose during the fight.

Some local news groups have reported that ONS was not cooperative with the police.

“I nor the protocols themselves allow for or condone any obstruction of justice by our staff,” Boggan said. “I can tell you that 10 minutes after the incident, I was on the phone with law enforcement.”

Richmond Police Captain Mark Gagan told Richmond Confidential in an earlier interview that police files detailing both the fistfight and allegations of sexual misconduct by an ONS female staff member were leaked to the media without authorization. Boggan said the release of the unredacted accounts was “malicious and intentional and targeted.”

“Was it personal?” Boggan said after the meeting. “I hate to speculate.”

Richmond Police Captain and Ceasefire liaison Anthony Williams agreed that there was a breakdown in communication between his department and ONS.

“The department absolutely supports the Office of Neighborhood Safety … we both have the same goal,” he said. “One of our goals is reducing violence in the city, and that is their whole goal.”

But Lynette Gibson McElhaney, executive director of Neighborhood Housing Services of the East Bay and a Ceasefire supporter, said she was concerned that Police Chief Chris Magnus had not sat down to discuss the problem, calling the problem a “relationship breakdown” rather than an issue of communication.

Rev. Eugene Jackson, another Ceasefire supporter, said the incident damaged trust between the police and ONS. He said that in a recent meeting, patrons of Ceasefire were concerned about being protected by the police if “ONS had been hung out to dry.”

As for the allegations of sexual misconduct on the part of one of his staff, Boggan said both the media and a city council member received the reports before he or City Manager Bill Lindsay had seen them.

“She wasn’t cited or arrested for any misconduct,” Boggan said in an interview.

Since the fight, Boggan has met with five of the seven young men involved in the incident, who, he said “understand the inappropriateness of their actions.” He also said he has met with the Richmond Police Department to “better appreciate what went wrong and how we move forward.”

Boggan said the fight could have easily broken out in the parking lot or could have resulted in one group following the other by car.

“I think they ended up in our office because they knew in the depths of their mind that it could only go so far,” he said in an interview.

ONS has recently been in the spotlight as a model program. Boggan and a small team went to South Africa as representatives at a World Health Organization Conference in September and were also included in a recent California Cities Gang Prevention Network meeting.

Seven audience members spoke in support of the group during a public comment session and five ONS staff members were in attendance last evening.

Boggan said ONS is looking to the future, but said they must solve tension between coordinating groups before moving forward.

“These last few weeks have created a challenge,” Boggan said. “Irreparable? No … We’ve got to find a way to preserve what we’ve started.”

Commissioner Vivien Feyer said the Human Rights and Human Relations Commission will propose ideas to the City Council and other administrators on how to deal with the issue.

“We’re stuck and this is the place where change can happen,” she said. “And it’s not change on the part of one group … the lines of communication have been opened.”