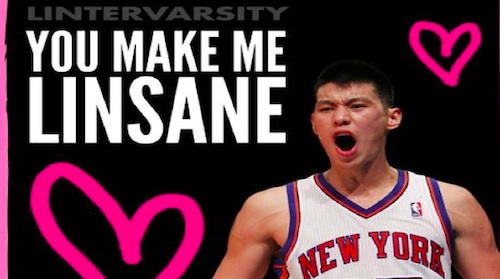 Pop culture traditionally has painted Asians as awkward, unathletic and never the leading man, like Long Duk Dong from a 1980s film. In just a week, Lin has shattered the stereotype.

Since he burst into the national consciousness just a week ago, basketball sensation and New York Knicks guard Jeremy Lin has proved that he’s just not any old underdog story. His is a very specific one. It leads me to a scene in the film “White Men Can’t Jump” where Wesley Snipes tells Woody Harrelson, “You can listen to Jimi (Hendrix), but you can’t hear him.”

Because to “hear” the story of Jeremy Lin, you have to go back to 1984 ― four years before Jeremy was even born ― and a beloved film by John Hughes called “Sixteen Candles.” It’s a cutesy high school drama with quintessential 1980s actors Molly Ringwald and Anthony Michael Hall.

Except, for no reason other than as racist comic relief, Hughes inserts the nightmare image of an Asian male foreign exchange student from an un-named Asian country (and thus all of them). The character’s name is Long Duk Dong, and he alternates between being goofy, accented and clueless, but always, always, always lusting after “American” girls.

To truly appreciate and understand the joy of what Jeremy Lin is doing right now, to know why so many of us Asian American males are wearing his jersey and chanting his name, you had to have cringed as that gong sounded whenever Long Duk Dong came into a scene. You had to be called his name at school and pretend it didn’t hurt and then laugh along with your “friends.” You had to let that shame burn inside you until it bordered on self-loathing.

You had to bear the cross of the “Donger.”

And what is that cross? Historically throughout American pop culture, it alternates between never being depicted and thus never existing OR being depicted in the most humiliating and emasculating light possible.

It means you can never be the lead but always the sidekick (Kato, Sulu, Mike Chang).

To create an import culture car and film franchise only to be relegated into a prop or a villain (The Fast and the Furious).

To never front a band but maybe strum along at stage left (Smashing Pumpkins and Airborne Toxic Event).

It means to never be depicted as handsome or suave or a lady’s man. (Or a gentleman’s man for that matter).

It means to never get to kiss the girl. (In “Romeo Must Die” Jet Li does not kiss Aaliyah and in “The Replacement Killers,” Chow Yun Fat does not kiss Mira Sorvino. I despised Hollywood for a very long time after those transgressions).

Of late, there has been some breakthrough. In sports, we have Ichiro and Yao, but since they were still deeply entrenched in their Japanese and Chinese cultures, that distanced them from our American identity. Recently, the rap group Far East Movement has been the first Asian American pop music group to get consistent air play. And pretty much everyone now knows that many Asian American guys are talented dancers due to reality TV shows like “So You Think You Can Dance” and “America’s Best Dance Crew.”

Of course, we do have one icon in popular culture ― probably the last Asian American guy who made us proud to be who we are and look how we do: Bruce Lee. I suspect that some of us deep down inside thought to ourselves, “Yeah, he’s great and all, but does it have to be at martial arts? That’s not exactly breaking stereotypes.”

Before Jeremy, Asian American males were akin to vampires. We’d look into the mirror of popular culture and see nothing ― or negativity. Now 26 years after “Sixteen Candles,” Jeremy Lin arrives to play basketball on its biggest stage and in doing so, to declare that we not only do we exist but that we can succeed as a professional athlete in one of the big three glory ESPN sports. That’s the power of popular media, right? For all 300-plus million of us Americans to see one collective new image.

And what an image that is. Through his play, Jeremy has already shattered some pretty heavy and burdensome stereotypes of Asian American males. He is neither short nor weak. He was born in the United States and does not speak with an accent (not that there is anything wrong with that). He is emotional and demonstrative. He has a swagger and flair to his game. He is at times flashy. He does not back down on the court.

He is a winner and best of all (and this is what makes sports so wonderful) he is a bonafide star strictly due to his abilities (not his looks, marketability, or pedigree).

In “White Men,” Snipes concludes his argument by saying, “Just because you’re listening to him doesn’t mean you’re hearing him.” And trust me when I write this: We Asian American males hear every single thing Jeremy Lin’s crossover dribbles, pinpoint passes and smooth swishes say about us ― and that’s that we too can be athletic, daring and heroic.

All are welcome on the Jeremy bandwagon, but there’s a VIP section for Asian American males. And since we’re a cool bunch, even Long Duk Dong can come along for the ride.

Ky-Phong Tran is a columnist for Nguoi Viet newspaper, where this article was first published.