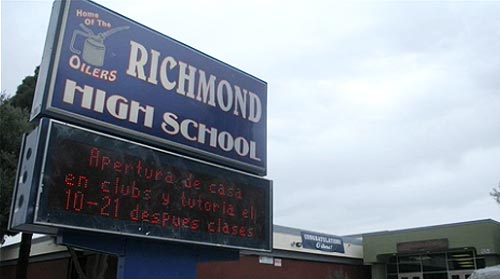 By this time last year Richmond High had recorded close to 500 suspensions. This year the school, which caters to one of the poorest and most underserved student populations in the Bay Area, has halved that number through an approach inspired by the Restorative Justice movement.

“We have to stop the ‘school to prison pipeline’,” says Millie Burns from Catholic Charities East Bay, a non-profit organization working closely with Richmond High’s staff to implement the Restorative School Discipline Project in conjunction with The California Endowment’s Healthy Richmond initiative.

“And we know a lot [of that work] has to center around the schools,” Burns adds.

Staff and students alike at Richmond High attribute the school’s success – suspensions have fallen from 486 in January of 2011 to 290 this year – to its adoption of Restorative Justice practices that were initially focused on the criminal justice system. Such practices emphasize reconciliation and, when applied to a school setting, give students the opportunity for redemption in place of expulsion.

Recent headlines have focused on the topic of school discipline, revealing that across the nation, the number of students suspended and/or expelled each year has increased steadily since the 1970’s.

In California, the use of “zero tolerance” policies – which emphasize disciplinary measures such as suspending or expelling troublesome students – became even more widespread in the 1990’s as districts responded to a growing public fear of violence, weapons and drug use on high school and middle school campuses.

According to the Department of Education, California schools issued 778,084 suspensions and expulsions in the 2009-10 school year alone, the last year for which data is available on the state education website. That comes out to over 11 percent of all enrolled students in the state.

“We know that dropping out and school failure [are] the precursors for a life-long involvement in violence and poverty,” explains Burns. “We now have evidence that introducing the philosophy, approach and practices that are now known as ‘restorative’ gives people different ways to respond in all aspects of their relationships with kids.”

The restorative approach, says Burns, is all about personal relationship building with the kids and providing them with support to overcome challenges.

“When conflicts happen, we are all harmed. We want to focus on the cause, have logical consequences, and hold ourselves as a community — wrong doers and victims — accountable.”

Sophomore Eugene MacDonald admits he’s never gotten on well with his teachers. On one occasion last year he got into it with an English teacher for something she said.

“I just blew up right in her face,” he says. “She tried to throw me out after that and I started cussing, throwing paper and going bad.”

A week later MacDonald was brought in to see Buzz Sherwood, and was invited to participate in a restorative justice discussion circle. “We did the circle and all my teachers were there and I got along with them. I found out more about them as we were in the circle. I actually did good last year.”

Sherwood, who retired from teaching in 2007, now coordinates the Restorative Discipline Project at Richmond High.

“I’m not in charge. I’m merely the elder that facilitates the process,” says Sherwood.

“One of our first big cases was a girl fight that was [played out] on Youtube. It was one of those [conflicts] that dated back to the 8th grade…”

“They never fought again,” Sherwood notes, adding the aim of the program is to fundamentally reshape the way the students see themselves and their peers.

“What everyone likes about the circle is that everyone gets to be heard, everybody gets to tell their understanding of what happened,” explains Sherwood. “In the circle we come to a solution that is acceptable for everyone. And that is unique for a lot of young people.”

17-year-old Nathaniel House plays on the school football team. He’s a running back on offense and a cornerback on defense, and hopes to make it to the NFL one day. After an altercation with another student he was brought to Sherwood’s office.

“He had us sit down and talk about it,” says House, explaining that were it not for the intervention, he and the other student “probably would have fought and been suspended, came back and been more heated.”

The process, says House, made him more conscious of the repercussions of his actions. “That’s pretty much what the circle is, it gives you the mindset to think about what you do before you do it.”

Such reactions are proof of what Sherwood says is a “hunger” among the students for a better way. “In their youth they don’t really know what that might be… [this new approach] opens the possibility for a new way of being and they really embrace it.”