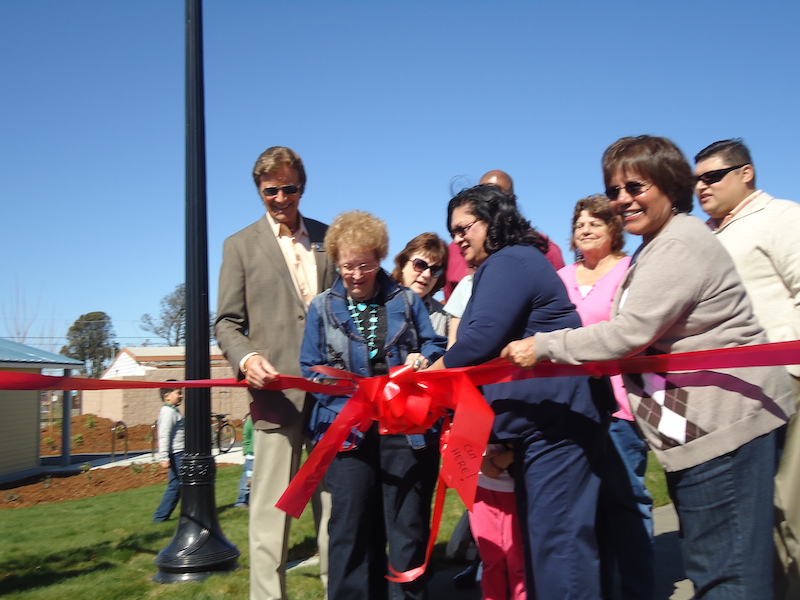 Posted at 08:36h in News by Pulse Editor 1 Comment

With a huge platinum scissor, Marilyn Wanlass and San Pablo Mayor Cecilia Valdez, snipped the red ribbon in celebration of opening Wanlass Park to the public this past Saturday, March 3rd. Following the cut, a wave of children rushed to the playground. Close to 200 parents, children and adults participated in the ceremony and enjoyed the park’s amenities. Located at 2999 21ST Street across Eagles Hall and besides Rheem Creek, Wanlass Park, at more than 3.5 acres, is the first new large-scale park developed by San Pablo in 44 years; the last being Davis Park.

The excitement was apparent throughout. “Everyone is very happy to have a park in this part of town where we needed it,” says Marta Julia Brown, 64, grandmother and San Pablo resident for 27 years. “It’s the best thing the mayor and city council has done.”

Wanlass Park boasts the standard park amenities such as grassy open space, play structures, picnic tables and barbcue pits. Yet, its focus on sustainability, community service, urban agriculture and environmental education establishes Wanlass Park as a modern and interactive center. Open to the public are community garden plots, garden boxes, as well as a wrap around walking trail and the old Wanlass barn now retrofitted as an Environmental Education Center, complete with solar panels, classrooms, restrooms and a kitchen. According to Mayor Valdez, in the next coming months, the San Pablo Recreation division will organize many workshops and programming, including a garden stewardship program for youth in Wanlass Park.

The property for Wanlass Park once belonged to Marilyn’s husband, Art Wanlass, Originally from Utah, Art migrated to San Pablo at the age of 18 and survived off the farm property during the Great Depression. Art died at the age of 97 in 1999, but had described to Marilyn his plans to have the farm become a “gathering place” for San Pablo’s residents. During her speech, Marilyn Wanlass spoke highly of the achievement, and of Art’s passion for the farm, describing it as “an oasis in the middle of the city.” Before ending her speech, Mariyln passed on the responsibility of caring for the park to the community by repeating her late husband’s favorite saying. “The land is yours now,” Marilyn said. “You care for the land and the land will take care of you, that was Art’s motto.”

Development of Wanlass Park began as early as 2008, and ultimately cost San Pablo a total of 7 million dollars. 1.8 million dollars was provided by the state, while 5.2 million dollars were paid in part by San Pablo’s 2000 and 2002 park bonds, and Prop 42, a state park development legislation. Similar to Richmond, San Pablo is a participant of Kaiser Permanente’s “Healthy Eating, Active Living” initiative, which seeks to promote community health in low-income and park poor areas. In actuality, Wanlass Park belongs to a trio of projects focused on directly improving community health and fitness. “ San Pablo is park poor for the population we have, and so we are working to expand our parks facilities”, says Valdez.

These plans include creating six multi use sports fields at Rumrill Boulevard and Chelsey Avenue, and the creation of the Helms Community Center. The sports field proposal on Rumrill Boulevard is also part of a larger plan to develop the Rumrill Corridor. However, while applications for grants for this project has been submitted, California shut down 400 redevelopment agencies in early February, including San Pablo’s, in order to review each city’s plan to pay off debt. Until then, the funds for redevelopment are on hold- and so are redevelopment projects like the Rumrill Fields, Helms Community Center and the mixed use Circle S project. Valdez says the San Pablo Redevelopment Agency is waiting for the state’s response. In the event of such possible closings, San Pablo has created the San Pablo Economic Development Corporation, Inc., a non-profit corporation that would continue redevelopment supported by San Pablo’s own stabilization funds. Redevelopment agencies expect to hear from the State in late April.

But for today, San Pablo celebrates a milestone. ‘”San Pablo now has a community resource that will serve the city for generations,” says Valdez. Pinole Middle School student Marcellus Thomas, 12, is excited to get involved. “It seems nice to have a planting garden we can use,” says Marcellus. Marcellus’ mother, Brenda Hannah, 38, likes the fact that Wanlass Park is in walking distance, and in their neighborhood. “We have an address in Richmond, my children go to school in San Pablo and Pinole, and my son will go on to Pinole Valley. It’s weird, like a no man’s land”, says Hannah. “It’s great to have a park here, where there was nothing else before, instead of going to other places.

Although the majority of Wanlass Park is now complete, phase 2, the development of the hill behind the Environmental Education barn will be developed into low impact open space. That development is expected to being shortly.