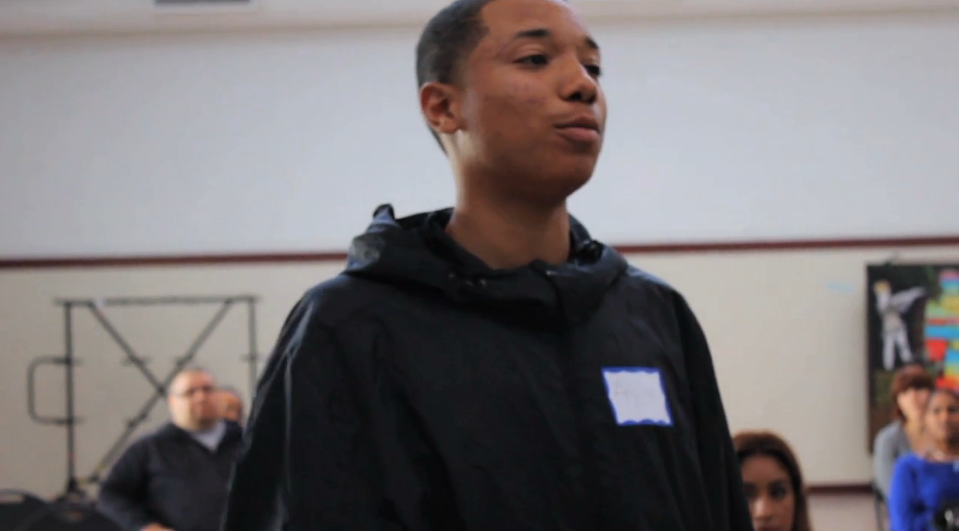 Late last month, the City of Richmond caught a glimpse of its own future when teachers, activists, youth mentors, police officers, the mayor and others came together for a town hall style meeting called “Reclaiming Richmond.”

Young people from the group RAW Talent hosted the dialogue, which focused on the issue of violence in Richmond.  The town hall took place at the Nevin Community Center, and in addition to an open discussion the forum included performances of spoken word poetry by youth whose lives have been directly impacted by community violence. Judging by the performances and the words spoken, it was clear that these youth have had enough of saying goodbye too soon to their fathers, friends, brothers, sisters, uncles, aunties and so on.

It was the first of many town hall meetings planned by RAW Talent, which seeks to intervene and address violence that youth experience on a daily basis.

Jamaya Walker shared her pain, courage and wisdom in a poem called “She Told You So,” which recalls the death of her father and the circumstances of his life, circumstances that eventually lead him to the grave and left her alone.  In the piece, she challenges her father’s justification for spending his life in the streets.

Her poem was followed by a discussion about “family agreements” led by Gonzalo Rucobo of Bay Area Peacekeepers (BAP), a strategy that allowed the gathering to be a safe, neutral space, transforming a room of strangers – even possible enemies – into a community.

“They are agreements, not rules, because rules are meant to be broken,” explained Rucobo. “Agreements however, are commitments which we all have a personal investment in maintaining.”  The list included:  1) respect 2) no judgment 3) the right to express yourself 4) agree to disagree 5) communication 6) confidentiality 7) participation and 8) no violence (verbal, physical or emotional).

Next came Dante Clark, one of the meeting organizers, who said the purpose was to address the violence going on in the city.  “Too many women and men [are] getting killed.  It’s an opportunity for young people to openly express themselves freely, an opportunity for young people to be part of a positive change in the city,” said Clark.  He then posed the questions, “What can we do to address this problem? And why is there violence? What is fueling it and who benefits from the violence?”  Heavy questions, but they didn’t deter the young people one bit. Hands flew up in the air and the microphone was passed around.

The responses of the young people reflected their frustration and confusion with the violence.  One young man stated, “You killing people you know, black on black crime, killing people you grew up with.”  Another shouted out in response, “Who benefits from the violence? The police take us to jail and [we] gotta pay the fine for them taking us to jail.”  Another youth responded with, “You shouldn’t have broken the law.  You know right and wrong.”  That discussion led to another about how violence is often stimulated by the business of drugs. One young man spoke on the lack of role models in Richmond, saying that many youth need to see that it’s possible to choose a life path that offers a chance of long term success rather than “being on the block slanging and banging.”

Everyone then broke into small groups where youth made a list of what was not working in their community. Those things included the police, prisons, and the education system.  As well as a decrease in violence, said the youth, Richmond needs more jobs, positive media, teachers that care, and more things to do in their free time.  The adult small group spoke about reducing trauma through healing and love.

The meeting ended with two very talented and powerful poets. The first, 15 year-old Dayliss Boone, remembered her brother who passed away not even a full year ago.  She shared that he encouraged her to go to school, work hard and told her she would make it out of the hood.  Deandre Evans, 18, ended the day with a statement that looked to the future and summed up the power behind this first Reclaiming Richmond gathering:  “Richmond wants to have peace, and we will continue to grow.”