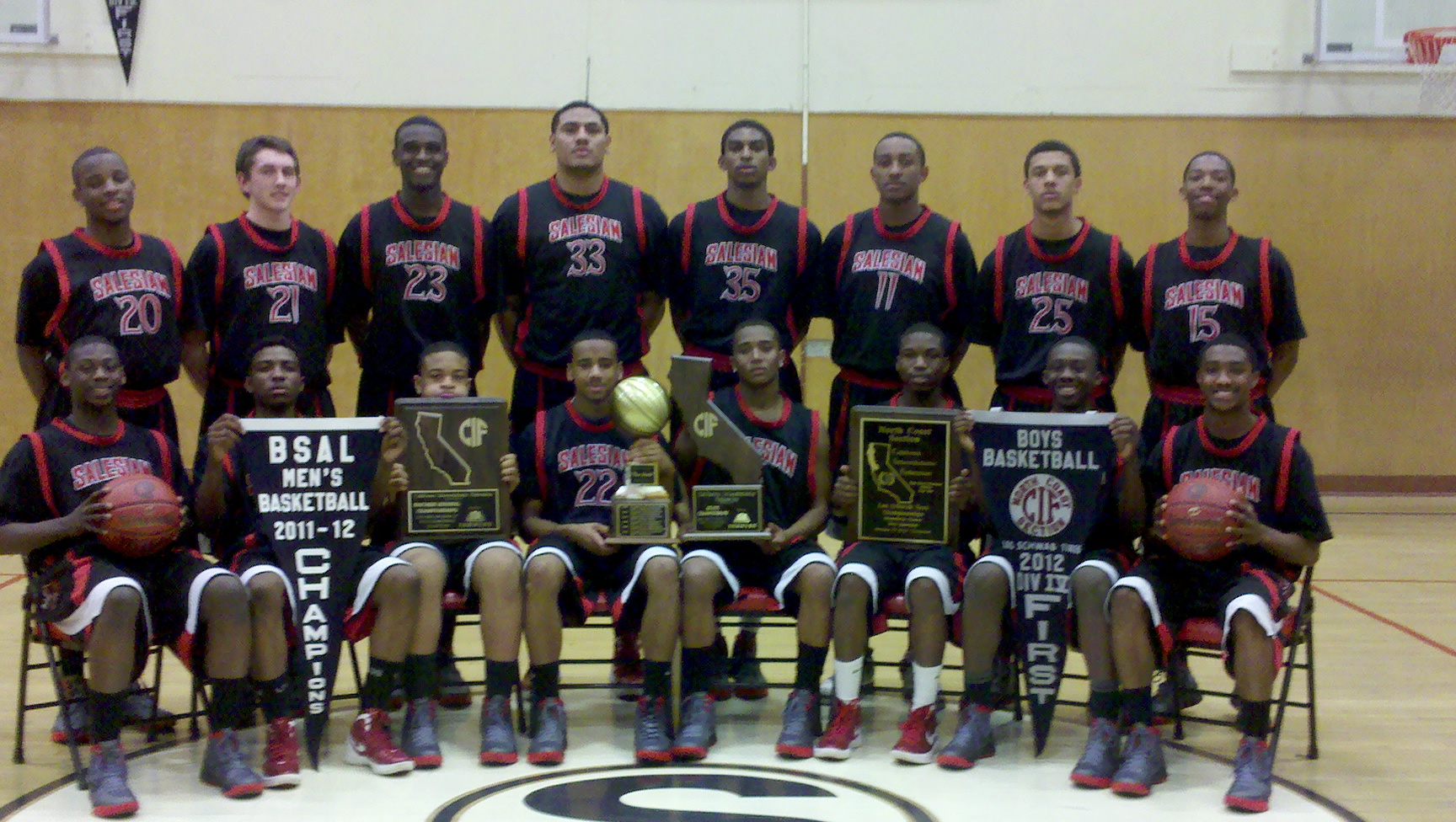 12 Apr A Year to Remember for Salesian High Basketball

The Salesian High School boys basketball team capped off one of the best seasons by a prep sports program in Richmond in recent memory, when they knocked off Price High School (Los Angeles) by a score of 70-56 in the Division IV State Championship game on March 23.

The team’s ascendancy to the state championship, played in Sacramento, generated a swell of school-wide support for the Salesian Pride in the days leading up to the Friday night game.  The school even chartered buses to take Salesian students and fans to and from Sacramento, and the “Salesian Psychos” – the name given to school’s fans – brought their loud and encouraging spirit to the contest.

“It was just an amazing feeling, getting back to the state championship,” said Michael Page, an 11th grader who also played on the Salesian team that was defeated in last year’s state championship.  “After the game we were all just so juiced, with the crowd clapping.”

However, the Pride’s victory at the state championship wasn’t the only highlight of the varsity team’s season. In December, the team won the Gridley Invitational Basketball Tournament in Florida. Going into the tournament, the team was ranked as one of the country’s top 100 prep teams.  They only lost two games in the tournament, both to opponents who were ranked in the top 10 nationally. The two losses were, in fact, the only two losses of the entire season for the Salesian varsity basketball team.

The Pride was the favorite in every game they played (excluding the Gridley Invitational), and remained the favorite all the way through to the end of the championship game. The team’s accomplishments included a 27 game winning streak, and they finished the season with a record of 34-2, an incredible season. USA Today has ranked Salesian’s varsity basketball team in the “Super 25” of top varsity basketball teams in the nation, and ESPN’s “Powerade Fab 50 Rankings” ranked them at number 21 in the nation.

Success for the Salesian High sports teams, and the individuals who play there, is nothing new.  In fact, the varsity basketball team has had many wonderful players over the years. Two such players were on the team this season: Faatiga “Freddie” Tagaloa, also widely known for his success on Salesian’s varsity football team, finished his final high school basketball season by breaking the school record for total victories. Over Tagaloa’s four years playing varsity basketball for Salesian, the team won 122 games. Eleventh grader Jabari Bird, has also received much attention from the media since the team won the championship in late March. Bird made 10 out of 16 shots in the championship game, scoring a total of 24 points for the Pride. Bird, who has one year left in high school, has already scored 1,121 points, ranking fifth on Salesian’s all-time list. Varsity basketball coach Bill Mellis predicts that, should Bird’s final season reflect his previous three, he could advance to as high as number three in Salesian history for points scored.

The Salesian High athletic department, led by athletic director Chad Nightingale and coaches like Bill Mellis, constantly turns out incredible athletes. Perhaps the most famous is current Detroit Lions running back Jahvid Best, who graduated from Salesian in 2007 and eventually went on to national fame at Cal Berkeley before being drafted by the NFL’s Lions.  Like Best, Tagaloa is sure to make headlines when he begins playing football for the University of California, Berkeley in the fall, and Bird is sure to go far after he graduates in the spring of 2013.