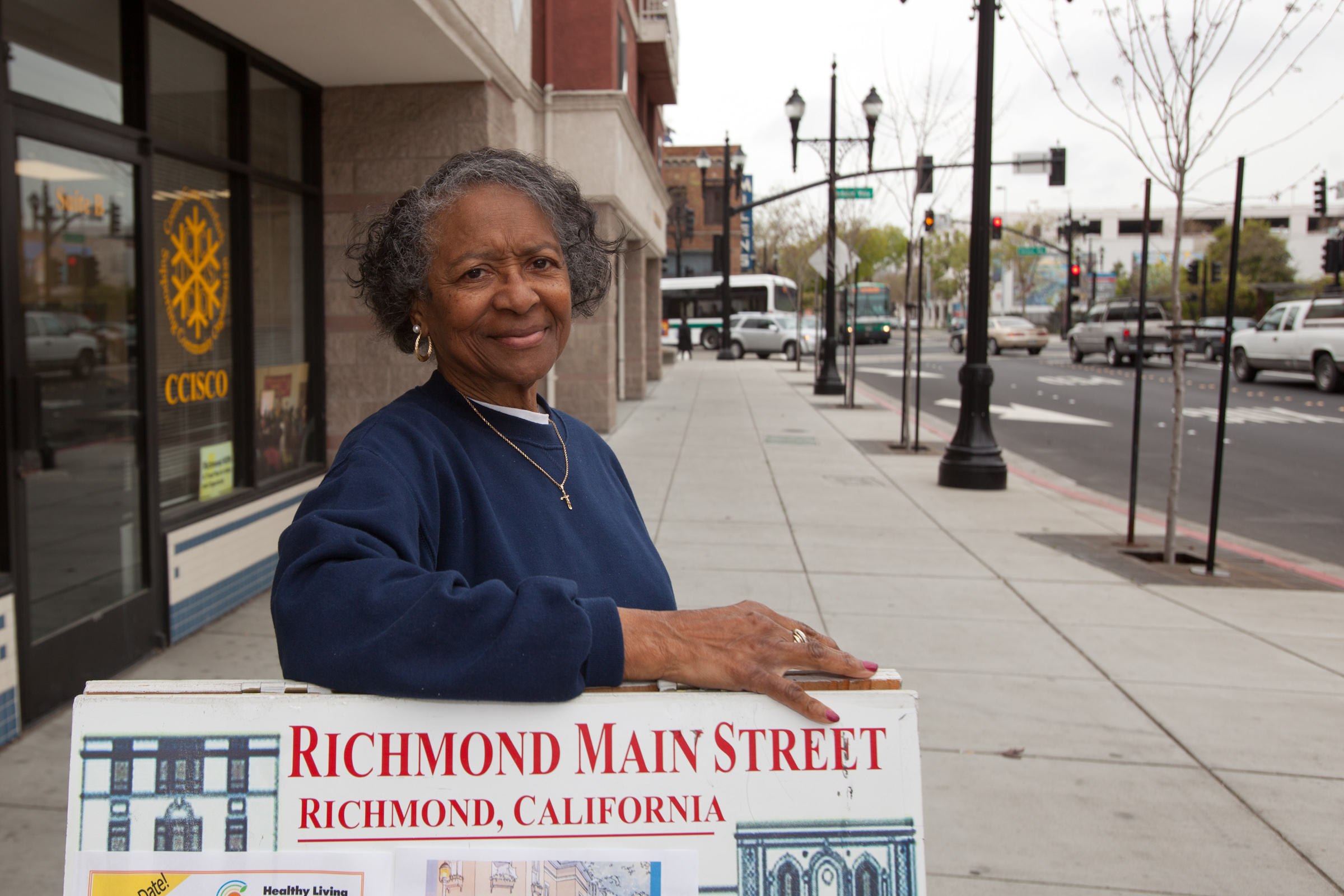 Bennie Singleton quietly entered the church, Richmond’s Garden of Peace Ministries, looking for other “night-walkers.” With a household of children and grandchildren waiting for her at home, there were plenty of other things Singleton could have been doing on a Friday night — but the 78-year-old grandmother just had to come out and walk.

For more than a year now, Singleton has been involved with Ceasefire, a group of concerned residents, clergy and police who are working together to stop violence, especially gun-violence, on the streets of Richmond. Their main activity is a weekly Friday night walk through problematic areas of the city, where they distribute information and do their best to get young people and other community members on board with the idea of a citywide ceasefire.

On this particular Friday the walkers were at Pullman Point, a townhouse-style apartment complex in central Richmond with a history of street violence. Once there, the walkers formed two-person teams and canvassed the entire grounds. It was a quiet night with only a few people out on the sidewalks, but each person the group encountered was given a few words and some literature.

Singleton was more quiet than usual. With the Ceasefire flyers held close to her heart, she walked strong and steady through the neighborhood while we spoke.

“I don’t really like people to know what I’m doing. I get embarrassed if people give me a compliment,” she said. “I like to do things in the background.”

Nonetheless, Singleton has shown herself to possess the character to act and responsibility to lead when necessary.

“I wish there were a lot more Bennies in [Richmond] because the city would already be a better place,” said Rev. Eugene Jackson, an organizer at Contra Costa Interfaith Supporting Community Organization (CCISCO) and one of the leaders of Cease Fire. “She represents the fact that even though you are a senior you do not stop serving. She has a place and a purpose.”

Singleton, said the Reverend, is an important source of encouragement for young people because like other elders with deep roots in Richmond, she carries the memory of a time when the city’s reputation was not so tarnished by negativity and community violence.

No Jim Crow, But No Less Racist

Singleton still introduces herself as Bennie Lois Clark Singleton. Clark, her maiden name, is one she has been unwilling to let go. “I use [the name] now, more than anything because [my parents are] responsible for what I am,” she said. “They made me who I am.”

Clark-Singleton was born in Louisville, Arkansas in 1934. Like thousands of other African Americans in the south during the Jim Crowe era, the Clarks looked to the north and the west as places that could offer more opportunity. They migrated to California after being recruited to work at the Richmond shipyards during World War II.

Back then, in the 1940s, Richmond was a racist town. Still a child, Clark-Singleton remembers seeing Ku Klux Klan marching down McDonald Avenue. Nevertheless, she still preferred Richmond to the segregated south because she was able to attend an integrated school.

“I really liked that,” she said, “[because] whatever they taught those white kids in that class, I could learn it. They couldn’t exclude me.”

Even though the schools were integrated, they still did their best to track African-American children into trade classes like machinery or woodshop or domestic courses for girls, like sewing or cooking. But Clark-Singleton was raised in a family that valued education and her parents managed to force the school to give her a college-prep education.

“[My father] was a strict disciplinarian who pushed us to get our education,” said Clark-Singleton about her father, Benjamin F. Clark Sr.

Clark-Singleton started working at the age of 17 at the U.S. Navy as a clerk. She got married a year later and had her first child at 19 years old. A life of family and work distracted her from studying. However, when her father started attending night school, she also went back to school and eventually earned her college degree. “That man is not going to outdo me,” she recalled thinking at the time about her father.

When Clark-Singleton and her husband, James Singleton, were going to buy a house in Richmond, they were told that only whites could buy the house. Unwilling to accept the limitations being imposed on them, they packed their bags and headed south to Los Angeles.

“My dad always had us in situations where we were just people with other people. We always lived in a mixed neighborhood,” Clark-Singleton said. “I have never felt inferior to anybody because of my color.”

But Los Angeles turned out to be no fairytale for the young couple. “It was worse than Richmond,” she said.

Ten years later, the family was back home in Richmond. The Singletons, now with three children, bought a house at Atchison Village in 1971. Her husband died that very same year, and Clark-Singleton has been living in the home ever since, the matriarch and main provider for a growing family. She continued working in the banking industry until 1997, when she retired. Today, her family has expanded to include five grandchildren and seven great-grandchildren.

Benjamin F. Clark Senior was a loving but strict father who would take his six children to the movie theater every weekend to see a western, although he usually fell asleep. “My dad [would] sleep everywhere,” said Clark-Singleton. “Anyplace.”

Clark-Singleton and the other children didn’t know at the time that their tired dad was not only busy working multiple jobs – he was a welder and the owner of a grocery store, among other things – but helping others in the community. Clark was a man of service.

It wasn’t until her father’s funeral that Clark-Singleton “found out all the things that he was doing,” she said.

Among those things was his involvement in the Civil Rights Movement. He also helped to start and manage the city’s first farmer’s market, and fought for improved schools in Richmond. After retiring, he would take care of senior citizens and sick people, visiting them, feeding them and cutting their hair.

“I see myself in him,” said Clark-Singleton. “I see a need, and I just do it. I don’t like wasting time.”

Like her father before her, retirement didn’t stop Clark-Singleton’s drive to remain a productive and helpful member of her community, and she soon began looking for volunteer opportunities. Her first stop was the Literacy for Every Adult Program where she volunteered as a teacher, but soon came to feel that education wasn’t her strong suit. So she switched her focus to neighborhood improvement efforts in Atchison Village and the Iron Triangle.

At the time, the area around McDonald Avenue and 8th Street weren’t being regularly cleaned, and city properties like the Nevin Community Center and Park had become dangerous areas, hot spots for criminal activity. So Clark-Singleton and other neighbors got organized and began attending city council meetings to demand more attention be paid to their neighborhoods.

“What do you mean no street sweeping? What do you mean you can’t ticket the cars?” Clark-Singleton remembered her reactions to the city’s justifications. “We would go up there en-masse.”

After applying lot of pressure, the city finally took them seriously. They got their streets cleaned and the Nevin Community Center back from drug dealers and drug addicts. It was a victory for grassroots democracy, and a good indication that residents in Richmond could change their circumstances, if they were persistent enough.

“It takes a lot of people concerned enough to do something,” Clark-Singleton said.

Richard Boyd moved to Richmond six years ago, and met Clark-Singleton at an Atchison Village neighborhood council meeting. He’d decided to get involved, he said, because of the amount of violence he witnessed on his block. Through Clark-Singleton, Boyd got involved with CCISCO where he now works as a community organizer.

“Bennie is by the book. When we get off track she pulls us back, she keeps us focused,” Boyd said. “When she’s around, we listen.”

Today, Clark-Singleton keeps on helping community-organized programs, dedicating almost half of her week to two volunteer programs: Ceasefire and Safe Return, another program organized by CCISCO, the Pacific Institute and the Richmond Office of Neighborhood Safety. The program aims to help parolees integrate back into the community.

Cease Fire is the program to which she dedicates the most time and energy, motivated by the young people in whom she still sees hope. “These are children starting out,” she said. “They still can make choices and decisions that can alter their lives.”

When she walks on the streets of Richmond with the other Ceasefire volunteers, she approaches young people as if she were a grandmother or an aunt. “I speak to them with respect,” she said, “And if they need a hug, I give them a hug.”

She also has a wish for Richmond youth. “I hope [young people] will see [Richmond] as the city I grew up in,” she said. “Where people trusted each other and you could go out, all over.” It shouldn’t be too much to expect, said Clark-Singleton. After all, she said, “there are more good people in Richmond than there are bad people.”