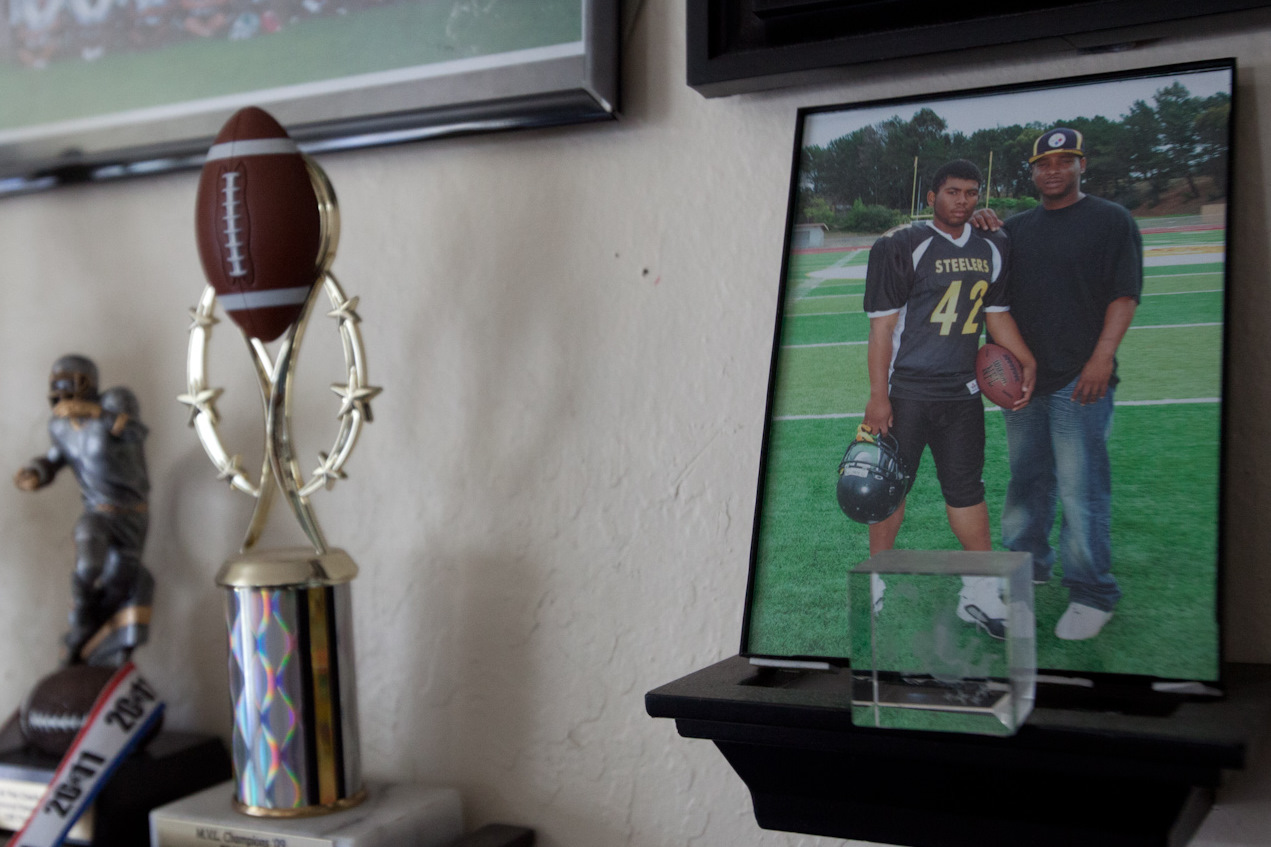 Posted at 10:32h in News, People by Pulse Editor 0 Comments

Terry Bell has the perfect explanation for what happened to his son. “He was at the right place at the wrong time,” Bell said. “It was just timing. He walked out and here they come.”

Gene Deshawn Grisby, Bell’s eldest son, was shot and killed on Monday, January 10, 2011, outside his grandmother’s house at Crescent Park in Richmond. Grisby, 16, who lived with his grandmother and was under full custody of his dad, was on the way to the gym.

According to Bell, Grisby was an “average” 16-year-old kid who maintained a 2.0 in school in order to keep playing football on the El Cerrito High School varsity team.

Bell is a carpenter and he pushed his son to do better than him. “I had little problems with him at school,” he said, talking about Grisby’s grades. “When he started to play football, he listened.”

Bell was a strict father, always making sure Grisby was staying out of trouble and improving in school. “I’m the police,” Bell said. “If you see my son doing anything, you call me.”

That weekend, Grisby stayed inside his grandmother’s house. He did his laundry and re-arranged his closet. On Monday morning Bell drove Grisby to school, as usual, but Grisby came back early when there was a big fight at El Cerrito High School and all the students were sent home.

Dianne McAdoo, 57, is Bell’s mother and Grisby’s grandmother. She said her son kept Grisby on a “short rope.”  Being a grandmother, McAdoo gave Bell a hard time for being so strict to such “a sweet little boy.”

Earlier on that fateful Monday, Grisby had asked his dad for a truce. He wanted to go train at the gym, to get an early start for the football season. Bell agreed.

“Unfortunately, the one time he softened up, that would happen,” McAdoo said.

Bell also blames the economic depression for what happened. Unemployed since 2009, Bell was unable to move away from Crescent Park. “We was just going to finish school here,” Bell said. “Once you graduate then we’ll go somewhere else, to go to Junior college or something,” he recalled telling his son.

“I didn’t want to go far away, just to the other side of the freeway,” Bell added. “Now I want to get [my family] far away from here.”

Bell was raised in Crescent Park, a few doors down from where his mother lives now. He remembers the 90’s as a more dangerous time, with more shootings.

“What’s different now is that anyone that lives in Crescent Park could be shot,” Bell said.  “I (thought I) had seen it all, until I saw this.”

Tyris Franklin, 16, was charged with murder with enhancements for the use of a gun for Grisby’s killing, and will be tried as an adult.  The trial against him starts Monday April 23, at Contra Costa Courthouse in Martinez.

The day of the murder, Franklin received a phone call from his brother who said he’d been beaten up by someone at Crescent Park. Franklin then asked Jean Pierre Fordjour, 19, to drive him to Crescent Park.

According to Bell, Grisby and Franklin had gotten into a fight when they were in the 8th grade and can’t recall anything else every happening between the two young men.

“It could have been any kid,” Bell said. “It just so happened to be the one that (Franklin) would definitely shoot.”

Bell has followed the court case closely. “I needed to know everything,” Bell said. “I waited to hear (evidence) that Gene did something. I never heard Gene did anything to deserve this.”

One year and three months have passed since Grisby’s murder. Bell deals with the pain by spending four hours a day at the gym, but said he still has a hard time finding forgiveness for Franklin.

“My anger has shifted to the parents,” Bell added. “What was his parents doing? Where were they?”

Franklin lived very close to Grisby’s home in Crescent Park. Bell said he wishes he knew Franklin had a problem with Grisby, so he could have knocked on his door and tried to find a solution that didn’t involve a gun.

“I got boxing gloves,” Bell said. “Those guys, they could have put on boxing gloves, if you got a problem.  But you bring a gun.”