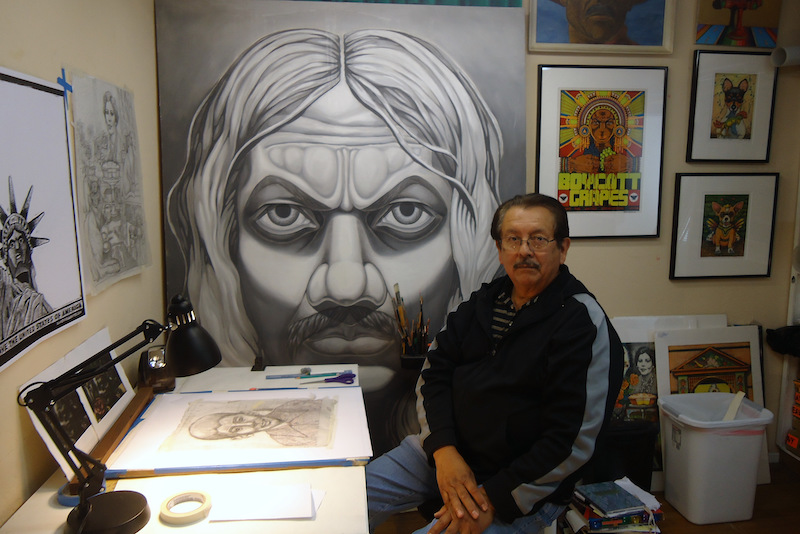 Posted at 10:17h in Arts and Culture, People by Pulse Editor 2 Comments

Xavier Viramontes is a nationally renowned printmaker whose prints impacted many political movements and social justice campaigns during the 1970’s. His prints are also part of the revolutionary canon of Chicano art produced at Galeria de la Raza in San Francisco. His most famous print, “Boycott Grapes, Support the United Farm Workers Union” from 1973, which depicts an Aztec warrior smashing grapes with his fists as the grape juice and blood drip over the title, is in the permanent collection of the Smithsonian American Art Museum in Washington, D.C. Yet, despite his body of work, few people know that Xavier Viramontes was born, raised and still lives in the San Pablo/Richmond area.

“The Richmond I refer to is this one, the old Richmond,” says Viramontes as he places the Richmond Museum’s photographic history book “Images of America: Richmond” on the café table. The book contains photographs of Richmond during the first half of the 20th Century, from the Californio period up to World War II and the city’s de-industrialization in the 1950’s. The photographs, especially those of MacDonald Avenue, remind Viramontes of his childhood and family.

“They used to have a number of theaters like the UA or the Fox (on MacDonald Avenue). There was the Rio Theater where they used to show Mexican movies. My grandmother and aunts used to love going there because my grandmother only spoke Spanish and would be able to see her movies,” remembers Viramontes.

Born on September 16,1943 in Richmond Hospital, Viramontes describes his household as a typical Mexican-American and Catholic family, where social gatherings revolved around baptisms, first communions, and religious festivities out at Saint Paul’s Church on Church Drive. His was a large family living near 1st street and MacDonald Avenue. In addition to his six siblings, Viramontes also had seven cousins living next door. They were a multigenerational family.  Made up of immigrants, first and second generation Americans, all were workers at Richmond’s cannery and factories. In 1949, his family moved from MacDonald Avenue to Merritt Avenue and Broadway in San Pablo, across from the now non-existent Broadway Elementary in a neighborhood comprised mostly of Mexican American and White Southern families.

According to Viramontes, there was mostly interracial harmony, even during the heyday of the Pachuco and Zoot Suit youth subcultures during the war era. The Pachuco culture involved Chicano youth dressed in draped and perfectly creased pants, cuffed long sleeve shirts and pompadour style hairdo’s. It was seen as a clear exaggeration of excess at a time when the United States government had placed rations on commercial items. The Zoot Suit culture in the Richmond and San Pablo suburbs, says Viramontes, was never as intense as it was in Los Angeles, yet it was still discouraged by the older generation of Mexican parents. “My friends and cousins were taking on that style, although ‘zoot-suitors’ were considered hooligans and parents discouraged it,” says Viramontes. “I have some photographs of my cousins wearing zoot suits,” he chuckles.

Xavier Viramontes’ nourishment in the visual arts began early in his childhood by way of drawing his surroundings, and only it continued as he took art classes at Helms Middle  School and later at Richmond Union High School. Viramontes graduated from RUHS in 1961, and was enrolled in Contra Costa Community College until he was drafted into the military and stationed in Germany. Being in Europe, Viramontes says he visited high-profile museums such as El Prado in Madrid and the Louvre in Paris. At seeing the contemporary and classical artworks, Viramontes felt encouraged to be the artist he always was.

Upon his return in 1969 and supported by the American GI Bill to attend college, Viramontes immediately enrolled at the San Francisco Art Institute (SFAI) and left San Pablo for the Mission District in San Francisco. Viramontes completed his studies at SFAI in 1973, and continued at San Francisco State, where he earned an MFA in Printmaking in 1977. Viramontes was also taking printmaking courses at San Francisco City College, and following his graduation from SF State, he began to teach printmaking and etching at City College. As his focus on printmaking sharpened, Viramontes found himself inspired by the Romanesque movie posters for Hollywood films like Ben Hur and The Ten Commandments, that were so prominent on the MacDonald Avenue theaters of his childhood.

“The thing about the posters were that they were very colorful movie posters, exciting and exaggerated. I like this exaggerated imagery,” says Viramontes. “I started with painting but I went into printmaking because of the fact that you could duplicate the images and share them with people. I could never sell my paintings because I wanted to keep them,” explains Viramontes.

The accessible distribution of printmaking intertwined with the political when Viramontes became involved in San Francisco’s legendary Galeria de la Raza on 24th and Bryant in the Mission District, during his time as a student at SFAI and SF State. It was powerful and reassuring to work with Latino artists interested in establishing their presence through a gallery and political involvement in the Mission community. At Galeria, Viramontes became one of the pioneers in Chicano art. His political artwork addressed a wide range of local issues — from resisting the closure of the International Hotel in Chinatown with his prints, commemorating the unjust murder of Danny Trevino by cops on an interactive and public billboard, to his prints for the United Farm Workers union. Every weekend, he recalls, Galeria artists would have art parties and produce works for political campaigns.

Viramontes would regularly visit his family in San Pablo, but he noticed the city remained quiet, seemingly untouched by the anti-Vietnam war demonstrations and people of color movements such as the Chicano, Black Panther Party, and Asian American movements that were occurring in Oakland, Berkeley and San Francisco.

It wasn’t until the mid-1990s, after living in San Francisco’s Mission District for 25 years, that Viramontes returned home to San Pablo, where he still lives and remains politically engaged through his art and community work. Still teaching at City College, Viramontes is now designing works for Occupy Oakland that focus on Medicare and social security. He is also a member of the San Pablo Community Alliance and a steering committee member for the Helms Community Center in San Pablo.

Viramontes’ formal involvement in San Pablo political activism began in 2010 when he and other residents rallied against a proposed return to eminent domain by the San Pablo City Council. First known as San Pablo Against Eminent Domain, the resident group mobilized the city’s neighborhoods, and as a result the proposal was struck down by San Pablo’s city council. The group then became the San Pablo Community Alliance, a resident group that discusses city council ideas. Viramontes felt compelled to organize against eminent domain out of personal experience.  In 1957, he and his family were uprooted from their San Pablo home on Merritt Avenue by way of eminent domain. “I know about eminent domain. I know it can uproot people and destroy families,” he says. Viramontes explains that in order to expand Broadway Elementary, the city had seized 10 houses. However, the expansion never occurred, and Broadway Elementary closed in 1986. Viramontes has commemorated those childhood memories in his prints.

As a steering committee member of the proposed Helms Community Center, Viramontes is adamant on the inclusion of the arts in Helms and San Pablo. He hopes to develop an art program for students once the center is built and create a gallery of multicultural artwork that reflects the diverse student body, which is expected to grow to 1,200. “If you have that many kids, you want to have something to calm down the situation. I think art has a very calming nature and I especially see no images of brown people. You don’t really see family situations that 70 percent of kids can relate to,” he says. It’s important, says Virmontes, that students of color see positive images of themselves and family; images that were lacking when he was a child. “That’s why I want to get some of my work and other artists work into Helms.”