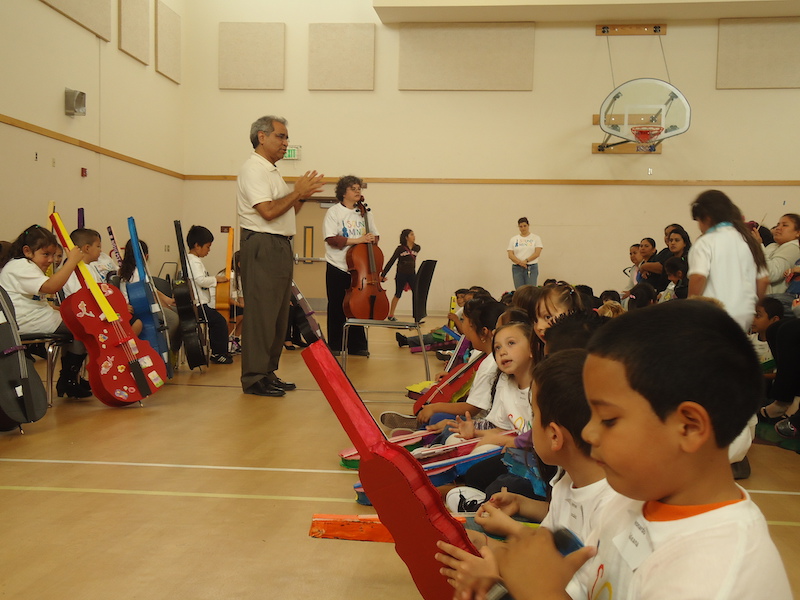 Posted at 12:53h in Arts and Culture, Education, News by Pulse Editor 0 Comments

First grade student Nohemi Pizana bowed at the end of the recital, her violet cardboard cello beside her. The audience applauded, but not only for her. Nohemi was joined by 57 of her classmates at Downer Elementary on April 27 for their first classical music recital – the showcase involved no playing, just a show and tell of instruments and a naming of the notes on each string — marking the beginning of a new musical arts program at Downer called Sound Minds.

“It’s her first time playing the cello and she’s excited about it,” said Raquel Santana, the Nohemi’s mother, as she applauded.

Sound Minds is a new musical arts and literacy improvement program developed and sponsored by the California Symphony. Downer Elementary is the first school in the Bay Area to be participating in Sound Minds, and this year’s first graders are the inaugural class. The model for Sound Minds is inspired by a Venezuelan musical program, El Sistema.

El Sistema was founded in 1975 with the intention to keep children away from gangs and drugs by enrolling them in music classes at an early age until adulthood. The program has reached over 310,00 students in Venezuela, and has produced a number of professional musicians.


The success and concept of El Sistema moved Walter Collins, the executive director of the California Symphony, to develop Sound Minds as a music program that could have a positive impact on student academics. The California Symphony had done some work in schools but, according to Collins, the programs were not addressing the most pressing needs of underserved bilingual communities, such as those in Richmond.

“Less than 48 percent of West Contra Costa Unified School District third-graders can read English at a third-grade level. Knowing the significance of literacy, we decided to address the situation in a completely new and comprehensive way,” said Collins.

The idea of Sound Minds is that after every school year, a new class of first-graders will enter, while succeeding classes will continue to be taught classical music until high school graduation. Sound Minds will test best strategies during their pilot run. 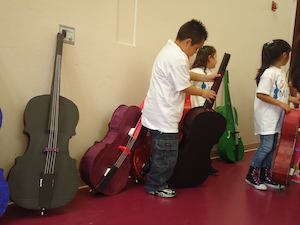 doing rhythm exercises. Another 30 minutes is dedicated to reading, enunciation, vocabulary building and comprehension in the English language, an aspect that makes it distinct from El Sistema.

The Board of the California Symphony chose Downer based on its academic needs and poverty levels. 85 percent of Downer students are English language learners and 100 percent are on the free school lunch program. Prior to Sound Minds, the school had gone two years without a music program, with the exception of after school guitar classes.

Although Sound Minds wants to see improvement in the student’s ability to play music, the “holy grail”, as Collins says, is to see whether Sound Minds has the potential to impact reading levels. During the pilot session, coordinators will measure the progress by comparing test data, as well as speaking to parents and teachers. The intention is to bring as many students as possible up to the standard reading level by the time they reach the third grade.

Third grade, for many English Language Learner students, is a target year, said Sonia Wong, the literacy coach at Downer Elementary. It is during the third grade that bilingual students are fully transitioned into English-only classes. According to Wong, of the 87 third grade students at Downer, 64 percent are reading at and well below the English reading level.

Sound Mind’s approach towards English learners is to also provide them “cultural literacy,” through the teaching of American poems and stories.

“Cultural literacy includes certain stories that all American children are familiar with,” said Wong. She lists Chicken Little, Cinderella and Aesop’s Fables as examples of American texts that are referenced throughout education. “These are references that are in stories, yet our students don’t understand them because they have not been exposed to them,” she said.

Preparing the predominantly English language learner population at Downer through Sound Minds is a strategy to close the achievement gap between white students and students of color, says Downer principal Marco Gonzales. He said the cultural gap is a challenge for immigrant families, who must navigate an unfamiliar American society to ensure opportunities for their children.

“I’m convinced part of the achievement gap is the experience gap. Our immigrant Latino families are intelligent and hardworking, but they can’t always transmit what they know in this environment, because they didn’t learn it here and that impacts their children,” said Gonzales. “If our kids don’t get out of the neighborhood, they won’t have experiences. As much as we can give them that, it will impact in decreasing the achievement gap. Music can be a gateway to mainstream culture.”

Gonzales sees the excitement of Sound Minds being contagious around the school. In a couple of weeks, Nohemi and the 57 musicians in training will trade in their cardboard instruments for real violins and cellos. And this time, music will echo from the strings.