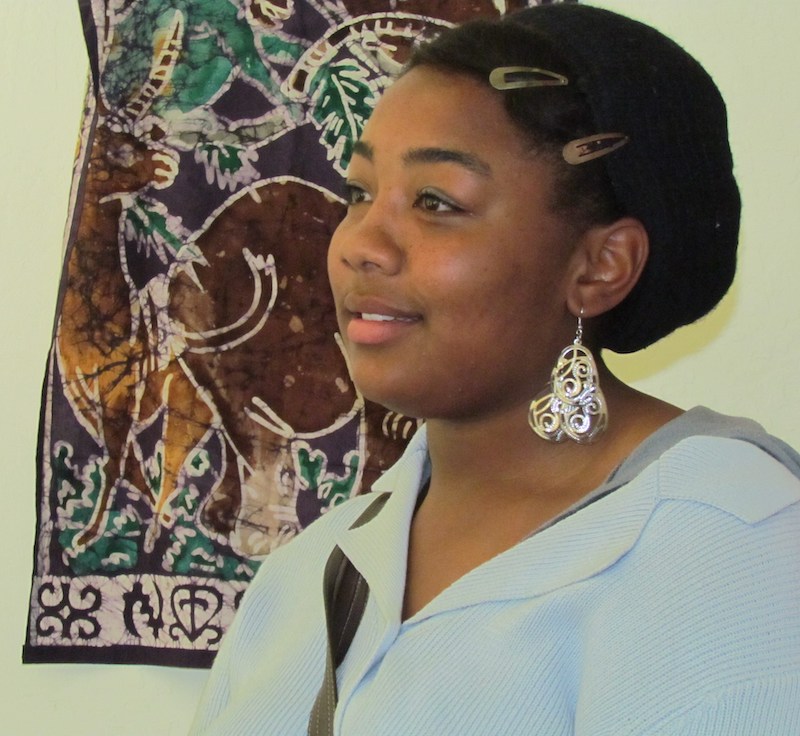 22 May RICHMOND’S HOMETOWN CHAMPION OF VERSE

Posted at 16:28h in Arts and Culture by Pulse Editor 0 Comments

EDITOR’S NOTE: Nyabingha McDowell, 15, began performing spoken word over a year ago with one of Richmond’s most exciting artist groups, RAW Talent. After two years of poetry slammin’, Nya was named the Bay Area Champion at the YouthSpeaks Grand Slam Championship in San Francisco on April 27. Nya will be a representative on the Bay Area Team in Brave New Voices, a competition that will draw explosive spoken word artists from all over the world to perform throughout the summer at the Paramount Theater in Oakland. Richmond Pulse writer Edgardo Cervano-Soto spoke to Nya and RAW Talent teacher Molly Raynor about spoken word poetry, Nya’s exciting win and her plans for the future.

RP: Nya, congratulations on winning the Bay Area Youth Speaks Grand Slam Championship, and for representing Richmond talent on that stage so well. What was the reaction from family and friends?

Nya McDowell: My mom didn’t believe I won! She thought I was lying because there was nothing to show that I won. All my friends kept coming up to me and saying congratulations. One of them said to me, “Oh my gosh, I know a famous person now.” But I’m not even famous.

RP: Do you prefer not to boast about it?

NM: I want to boast about it to myself. I don’t want everybody and their momma to know. When they announced it at church on Sunday, I was so embarrassed. I had to explain to everyone what “slammin’” is.

Molly Raynor: A lot of people don’t realize what [Nya’s victory] means. Out of 180 kids in the Bay Area, she won first place.  The Bay Area is considered to be the most competitive (region for) slam in the country because there are poets from Berkeley, Oakland and San Francisco, all competing. I’ve also been explaining it to everyone.

RP:  Nya, in addition to yourself, Marje Kilpatrick and D’Niese Robinson of RAW Talent also made it to the second round of finals that evening. What do you think your win, and the strong showing from RAW Talent means for Richmond?

NM: It means a lot. I’m the first person to win from RAW Talent. I made history. I think I set the bar for some people here in RAW Talent to do better.

MR: Right, we are hoping that someday there will be so many poets in Richmond that they will have to give us our own team.

RP: What was the interaction between you three while waiting backstage?

NM: We were supporting each other. It wasn’t a competition between us because we wanted to make the team together.

RP: Nya, you performed two incredible pieces that received the highest scores of the evening. The first had to do with prostitution, and the second was a piece about the cycle of violence in Richmond that involved multiple characters. When you perform these pieces, what do you want the listener to feel?

NM: I want them to feel (like I’m talking about myself), because that shows how good I did my poem. I want them to think it’s really me — and everyone thought it was me! They thought I was a prostitute, even though I wasn’t.  I didn’t want to make that known, (although) Ms. Raynor thought I should have.

RP: It’s a beautiful but very painful piece to listen to. Why is it important for you to have people believe the story and identify you with it?

NM: After I performed that piece, someone told me that I had said something they couldn’t. People going through that don’t have anybody to tell their story, so I feel if I do it… maybe they can feel the courage to say it out loud and speak their mind and tell somebody. I just want stories to be told.

RP: Can you describe your writing process and preparation?

NM: First, I get a prompt. I’m very difficult when it comes to writing poetry. If you don’t give me a prompt I want to write about, I will tell you. I need a good prompt, something really different. Second, I go into a quiet place, and I lay down and think about the prompt. Once I have done that, at school when I’m bored I begin to write, write, write, and I finish a poem.

RP: How excited are you for Brave New Voices?

NM: I’m so excited, you can’t understand what I’m feeling. I can’t wait to meet new people from all around the world, see some new styles of writing, maybe some ideas. I can’t wait.

RP: Ten years from now, where do you see yourself?

NM: I see myself writing a play, a spoken word play. I was always interested in writing plays when I was younger, and now that I am in spoken word, I can actually do that. My mom wants me to write a book. I see myself as a leader in college. I will probably minor in poetry but I want to be a psychiatrist. I don’t know how those two mix.

RP: Again, congrats Nya on the win and good luck to you and the Bay Area team in Brave New Voices.  If only they’d given you any trophy or a medal for winning!

NM: That’s what I was wondering! What’s up with that? Give me some roses, or something. I want roses.

On May 20, RAW Talent will be performing its first spoken word play titled, “From the Pen to the Page, This is My Redemption” at the East Bay Center for Performing Arts in Richmond, from 3pm-6pm. Tickets are on sale at brownpapertickets.com.