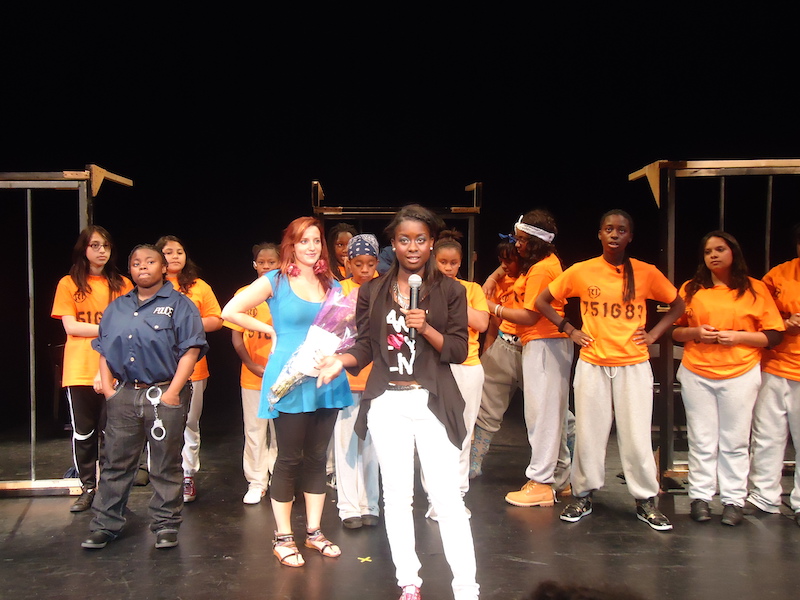 25 May From the Pen, to the Page, to the Heart: RAW Talent electrifies

Posted at 10:53h in Arts and Culture by Pulse Editor 1 Comment

Poetry, in its fragile beauty and crackling roughness, was fully embodied last Sunday night courtesy of RAW Talent, as the poets performed their first spoken word play, “From the Pen to the Page: This is my Redemption” at the East Bay Center for Performing Arts. Within the last year, RAW Talent has leaped to the forefront of Richmond’s young arts scene.

In April, preliminary rounds from the YouthSpeaks competition was hosted in Richmond for the first time. That same month, the program’s director and coach, Molly Raynor was awarded the Jefferson Prize by CBS 5 for her teaching. The high point, of course, was the Nya McDowells’s win at Youth Speaks Grand Slam Championship and RAW Talent’s strong showing throughout the competition. Heads are definitely turning their direction.

However, while “From the Pen to the Page” more than confirmed the talent of the spoken word artists, the show undertook a sharp political angle by exploring the systematic oppression prisons conjure on communities and the individual. RAW Talent demonstrated that their poems are not simply literary works of metaphors and rhymes, but it contains a rhetoric and critique of racial stereotypes and institutional power.

The show opened with audio from an interview of Stanley Tookie Williams. The use of archival interviews from incarcerated black activists, including Mumia Abu-Jamal, in itself presented a history of mass incarceration affecting communities of color. By referring to Jim Crow laws, literacy tests and the dehumanization of prisoners, the audio provided a context to the night, and eerily echoed anti-immigration policies and disenfranchisement laws currently being developed in the South today.

The opening performances set the tone of the night and each approached the topic of incarceration and its effects differently. Notably, Brenda Quintanilla’s and Serafin Macias’ poems clearly stated that those outside of prison serve time too without seeing their loved ones.

However, a strong point in the first half occurred in the ensemble piece with Molly Raynor leading a group of RAW Talent artists. Her poem focused on an incident where two white poetry instructors were charged of instigating resistance among the prisoners. The instructors are kicked out, while the prisoners are punished. It was special to see instructors and students interact on stage, and witness how Raynor’s performance style and skill could push RAW Talent artists further. It was the first piece that incorporated physicality in the body, as the students matched Raynor’s deep grunts and body convulsions. That moment hinted towards a physical style to be further developed among RAW Talent.

Yet if the ensemble piece built its power on the interactive nature between Raynor and RAW Talent, Micah Brumfield’s follow-up solo performance electrified on its own. The poem was unique in that it explored the clarity beget by living in a prison cell. Brumfield has a subdued style. It’s a quiet intensity, matched by Brumfield’s striking gazes and pauses. Brumfied slows down his word, breaks and elongates them at certain syllables. His delivery is muscular and deep. It’s evident that Brumfield has clearly honed his craft.

The second half continued in strong performances, and introducing new members of RAW Talent. But one surprise performance, that was refreshing amid the intensity, was when the night’s youngest and smallest participants, the Making Waves Academy poets, got on stage. In their piece the group of 7, acted as prisoners who wished they had better lunch food. The act of remembering childhood foods and family memories fit the young performers. It was effective on stage, to see how prison could reduce adults to wanting to be children again, and live in familial comfort. The new class of performers kept the piece light, and sensible. Yet it was equally discomforting to see young bodies enact emotions that are common in prisons, the emotion of missing home.

At the end of the night, Dante Clark’s solo performance completely amazed the audience. In this piece, Clark, whose character had been referred to as “psycho” and “sicko” throughout the evening, is thrown into solitary confinement. Under strong red lighting, Clark is confined to a circle on the stage, yet his body expression is giant. In his piece, Clark gives a history of slavery and how prison is its descendent. Clark’s character evokes the names of Emmit Till, Nat Turner and Malcolm X, the ghosts of black men. In keeping with his “psycho” character, Clark embodies racial tropes such as the violent black man, but Clark knowingly critiques it by performing this character to the guards and audience. Clark becomes the madness to show how the degree of damage racism and the prison system has done on the American psyche. His words were chilling. To call Clark’s piece a performance is not correct, because his delivery didn’t have traces of rehearsal. To me it felt like watching an open wound bleed raw and witnessing a poetry that you know is derived of generations of experience. Clark’s piece felt like that; there was more than one body on that stage with Clark. His piece deserves to be watched and studied again in order to fully comprehend it, but his emotional impact hits the heart on the first try.

“From the Pen to the Page: This is My Redemption” left me inspired and appreciative of RAW Talent. The magic exhibited that night leaves nothing to mystery why RAW Talent earns and deserves all of its accomplishments. It may be sooner than later, when RAW Talent will have to do more than one show.