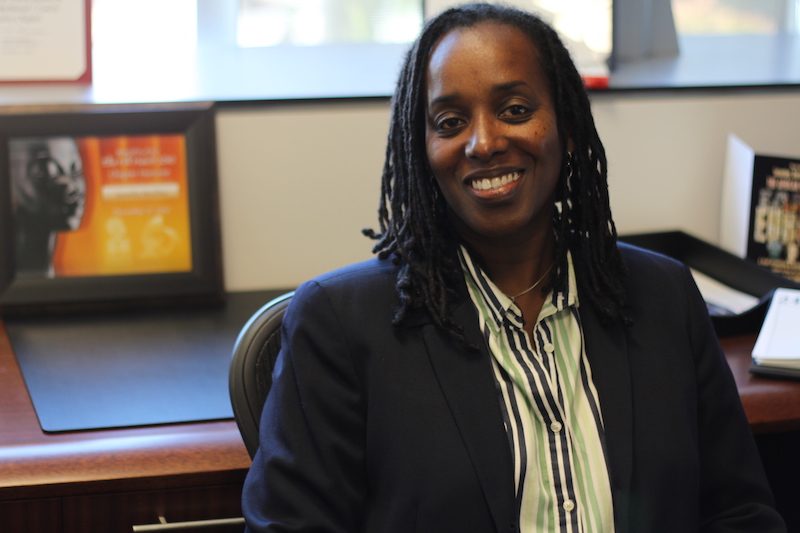 Posted at 11:30h in People by Pulse Editor 2 Comments

EDITOR’S NOTE: Jovanka Beckles is a Richmond city councilmember who also works full-time as a mental health specialist for Contra Costa County. She was born in Panama City, where she grew up in a bilingual, multicultural household. Her parents moved to the Unites States in1972, and she has lived in Richmond for the last 10 years.
Richmond Pulse editor Malcolm Marshall recently spoke to Beckles about her motivations for serving political office in Richmond, the challenges in doing so, and what she hopes to accomplish during her time on the council.

Richmond Pulse: What led you to run for city council? Did you just wake up one day and decide, “I’m going to run?”

Jovanka Beckles: There was a time when I [had been] DJ’ing and I was returning home (one night after a gig.) It was about one in the morning. I parked the car and was unloading (my gear.) The garage door was up… Long story short, we were the victims of a home invasion. These guys came up with a gun. They went into the house and they had the gun up to myself, up to my partner.

Then at one point they put the gun to our son’s head, asking, “What gang are you in?” You know, this kid wasn’t into any of that stuff, and then at one point after they got money and jewelry, got what they needed, they went to his room and they looked around at the stuff he had and they said, “Wow, must be nice to, you know, have somebody and [have] people love you.” That’s what this guy said, and you know, at that moment I was thinking, these young people in Richmond are hurting. What can I do? I can be committed to building community, but part of building community is taking care of our young people, and how can I do that besides what I do for a living? I thought the best way to make a difference is by helping to heal and helping to create policies and helping to create things that are needed.

RP: Did those young men get caught by the police?
JB: Never got caught, you know. We filed a report, and it was over. There’s so many different scenarios that I think could have happened, but I think it all happened for a reason. That’s my (belief)… I think things happen for a reason. They could have been caught — and then what? I feel like, they did what they did. Wherever they are at this point, I only wish the best for them. But it motivated me and compelled me to run for office, and here I am.

RP: As a mental health specialist, what are the specific mental health challenges you see in Richmond?
JB: (People are) not well emotionally, because of different things that have happened — PTSD, depression, bipolar; and in kids, we see a lot of oppositional defiance.

(But) people don’t want to be associated with mental health, and so oftentimes we don’t seek the services that we need, and to me it’s just a part of being healthy. Just like if we weren’t healthy physically, we’d go see a doctor, right? People just don’t want that stigma and it’s unfortunate because we do see in a community like Richmond a lot of young people running around who need some emotional healing.

When you’re walking around traumatized, it’s difficult to live, to just sort of function. When you’re depressed, lot of kids, young people and adults try to medicate themselves with alcohol and marijuana [and] all kinds of drugs. When you’re angry and you can’t understand why your life is the way it is, or why your father’s not around, or all these kind of things, then you take that out on other people. We’re seeing young people lashing out at each other because of the hurt, the fear and the anger that they have inside them. Without encouragement to get some healing, we see it come out in some really tragic ways.

RP: Your race and background have been a hot button issue since before your election when, as a candidate, you were told you were “dangerous for African-Americans.” Why do you think it’s such an issue here in Richmond?
JB: Well again, it’s a distraction. Right. If you here the words, “She’s not black, she don’t care about black people”…
RP: Is that actually said?
JB: That’s actually said. They shout it out, “I’m not black.” Look at me with my locks, my complexion and everything, my background. Went to a historically black university. A member of black organizations, Latino as well… but basically look at me, look at what I’m doing. I’m working in this community. My clients are black kids, who respect me, and I respect them because ever since I’ve been to high school and especially since I’ve been to a black college I’ve been conscious of what’s been done to us African people. So anybody that could look at me and say I’m not black—obviously there is a level of ignorance that needs to be somehow changed and my hope is that will happen. But (those accusations of not being black) are said because I was born in a Latin American country, and I’m Latin American. I’m a black Latina. Again, it’s just a way to distract people from the issues. Even if I were white, even if I were purple or whatever…who cares? Look at how I’m voting, look at my actions, look at what I’m working towards.
RP: As someone who identifies with the black and gay communities what was your take on the controversy over the gay pride proclamation by youth from the RYSE center?
JB: This was a proclamation honoring individuals for their important contributions to the youth of Richmond. To use this time to promote the politics of division was a particularly reprehensible display of the lengths some people will go to advance their own political agenda.

RP: Which brings up more issues for you on the council: Being black, being Latina or being gay?
JB: Being a black Latina brings up the most issues from those seeking to divide Black Americans within ourselves, as well as divide the Black and Latino communities. I can see clearly how this serves the economic and social needs of corporations and the very, very wealthy, and prevents us from struggling together for social and economic justice for the greater good of the Richmond community.

I do suspect that now that people are clear that I am a gay woman (they only suspected before) they will use this to attempt to further their divisive tactics. But I wholeheartedly believe that the majority of Richmond residents do not agree with these types of divisive tactics and will make this very clear as we move forward as one unified Richmond.

RP: What are some of the important issues that you are working on that you are excited about?
JB: The issue of banning the box, so that all of our residents can have equal access to employment. The issue of Municipal ID’s, although that was passed by the council we’re still working on finding vendors for that. What’s exciting to me now is the Millionaires tax. Because I always wondered when are we going to get tired of this injustice that is going on in our country? Where the rich are getting richer and everybody else is getting poorer? When are we gonna get tired of of schools closing? When are we gonna get tired of people losing there benefits for the sake of profits? That’s something [the Millionaires Tax] that we the people can put on there. Right now it’s a petition. We need a million registered voters so the RPA is conducting a voter registration drive. Its not just Richmond, we’re talking about the whole state. If we get it on the ballot there is overwhelming support for this. This is what I call justice and I’m really excited about that.

I’m also excited about the tax on sugar sweetened beverages. In Richmond we’ve seen a lot of services cut. There are a lot of activities that could be implemented but need money. Well how could we do that? We’re talking about helping our children and or community to be healthy by reducing the amount of sugary beverages we consume and at the same time, we can actually have money for things to stay healthy. Like P.E. in schools, soccer fields, football fields, activities for recreation departments….
At a time when we are facing so many cuts, this is a way that we can all contribute to the quality of life in our own community.