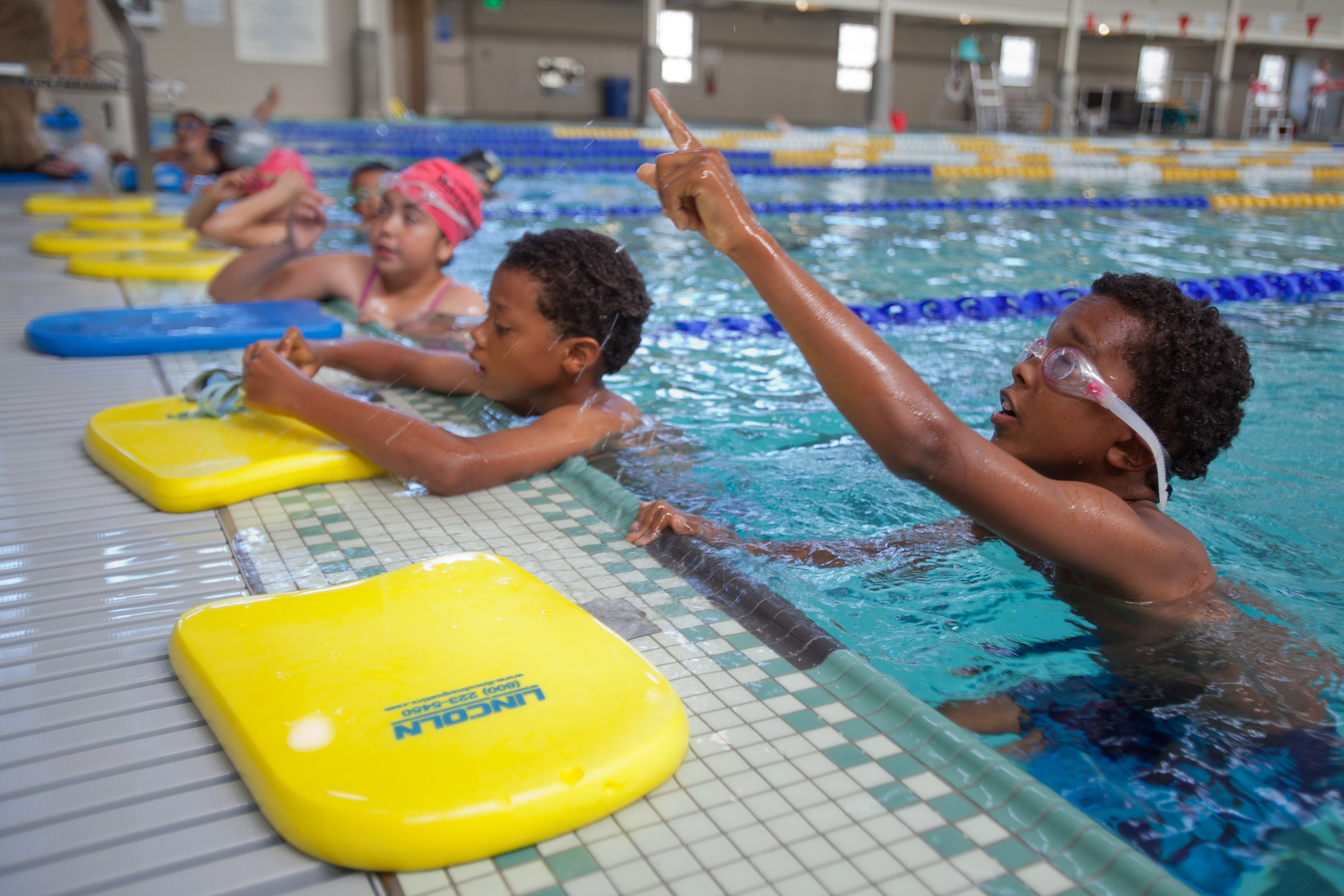 27 Jun Richmond Swims Gets Youth in the Water

Caleb Monteiro, 6, was the only one in the lane at the pool, kicking away on his back. He swam for 30 minutes and today he did a great job.

“She said I’m on fire,” said Caleb with a big smile repeating his coach’s comment.

Every week, four times a week, Caleb and his two older brothers come to the Richmond Municipal Natatorium, or Richmond Plunge, to train as part of the Richmond Swims Sailfish team.

Richmond Swims is a Non Governmental Organization founded in September 2010 after the city run public pool was reopened. Richmond Swims has two on going programs, Richmond Sailfish which hosts children from five to 18, and Richmond Plunge Masters, a swimming program for adults 18 and up.

According to John Schonder, head coach and general manager of the program, since its beginning Richmond Swims has taught around 130 swimmers. Today the program has 55 permanent swimmers, starting at the age of 5.

The goal of the organization is to provide the city with a year-round program that can teach residents of Richmond how to swim, and then give them the opportunity of training to participate in swimming competitions locally and nationally.

“Richmond is a very diverse community, with swimmers representing all different nationalities and ethnicities,” said Schonder. “We are teaching a necessary life skill that can avoid an accident.”

But the programs wants to go further than swimming. Schonder explained that the training program also asks participants to set goals not only for competitive swimming, but also for their school performance and encourages them to be active and committed members of their families and their community.

“Swimming gives them more drive,” said Tana Monteiro, mother of the three Monteiro swimmers. “They have [swimming] goals, like to learn the strokes, and they learn that if you have a goal, you work at it and you can do it. It helps them with other things in life.”

Caleb was the reason Monteiro and her mother, April Kutger, reached out to the Richmond Swims team a year and a half ago. They both love swimming and they wanted their boys to be comfortable in the water.  At first, Caleb was the one that looked more comfortable.

But after the evaluation, Caleb wasn’t ready for the team, and he had to take private swimming lessons to level out and become a Guppy, the name for the initial swimming level in the team.

“It took a lot of practice to get my swimming right,” Caleb said.

Now the three brothers are part of the team under a scholarship and Caleb will participate in his first meet at the end of July.

“It’s not all about winning, it’s about playing the game and having fun,” Caleb said grabbing his head. “And it’s going to be a lot of work.”

Anybody from Richmond between the ages of 5 and 18 can be part of the Richmond Sailfish Swimming Team.

All new swimmers have to go through an evaluation to determine their ability as swimmers and they can enjoy a two week free trial of the program to see if they like team.

“Most of our team members had no experience when they started,” said Schonder. “On our first week we had 45 swimmer, and only four had had swimming lessons before or some swimming abilities.”

The minimum swimming requirements that a new member of the team must have are as fun as floating like an airplane or jellyfish, jumping into the deep end of a pool and comfortably swimming over to the side, or blowing bubbles in the water.

Although a monthly fee applies to all participants, scholarships are available for kids that are committed to the program but can’t afford the fee.

The fees varies from $35 to $75 a month, depending on the group level of the swimmer, and the scholarship goes from full to 25 percent coverage of the fee.

Despite the fact that most of the program’s costs are covered by different grants and donations, Schonder said that the fees are necessary to cover pool rental time, equipment, instructors, payroll taxes, liability insurance and USA Swimming annual fee.

WHAT ABOUT THE ADULT SWIMMERS?

Richmond residents 18 and over can also learn how to swim and practice the sport as part of the Richmond Plunge Masters program.

New members will have one free lesson where the coaches will evaluate their swimming abilities and determine the type of training they need. People must be comfortable in deep water but do not need to know how to swim.

The Masters program also has a fee. People that are hoping to swim more than twice a week are suggested to get the $50 monthly pass. Those that will swim twice a week or less can get a 10 swimming lessons card for $55 which has a six month limit.

Swimming workouts are Monday to Saturday at different schedules.