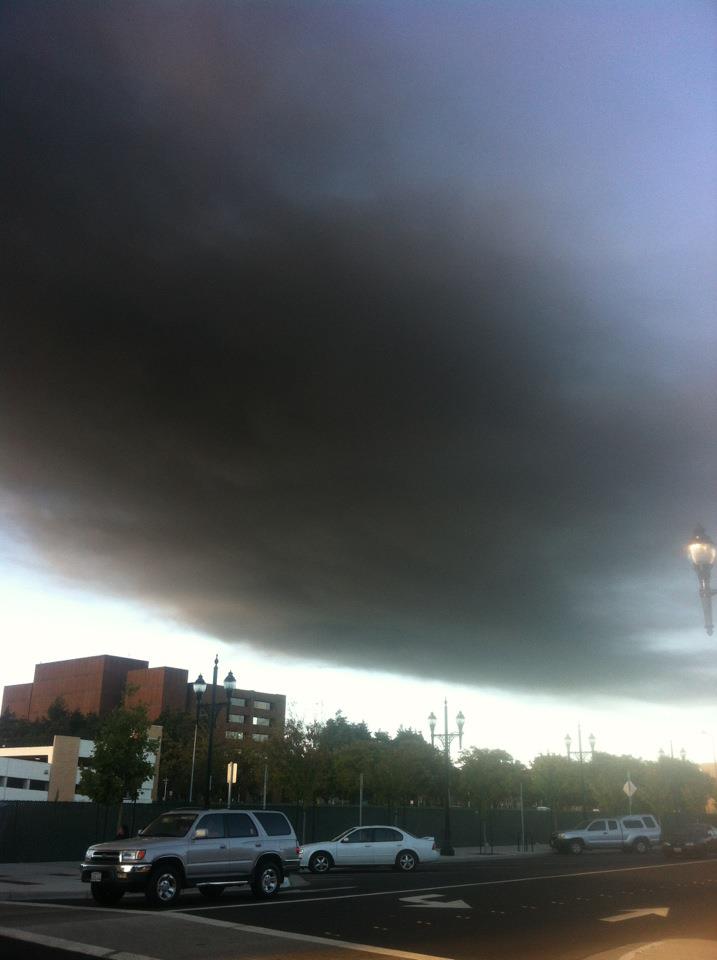 On the night of Monday, August 6, residents of Richmond, California were advised to seek shelter indoors due to a series of explosions resulting in a large fire at the Chevron oil refinery, the largest refinery in Northern California. The fire sent billows of black smoke skyward, which rose high enough to be seen for miles throughout the Bay Area.

Opened in 1902, the oil refinery has long made Chevron the City of Richmond’s largest employer. The refinery has also been blamed for the city’s historically high rates of asthma and other health matters associated with pollution, toxins and industrial waste that is a byproduct of the industry.

Richmond Pulse collected the following blogs and reactions in the hours immediately following the refinery disaster, which, according to the California Emergency Management Agency, released sulfur dioxide, nitrogen oxide, hydrogen oxide, sulfuric acid and nitrogen dioxide into the air.

When the sirens boomed, I rose from my seat and casually closed the windows. My mom, mentally and physically exhausted from taking care of children all day, asked why I closed the window. Because it isn’t Wednesday, I said (the Chevron refinery sounds a test alarm each Wednesday)… and this is real. She looked at me, confused by time and sound, and finally listened to the sirens.

I led my mom and dad outside our home and we saw the funnel of dark fumes growing. Having lived through this before, we knew the drill. We shut the doors and windows, and placed rags underneath the gaps that we’d failed to fully secure during our house repairs.

Of course, the TV was on. And the phone was ringing off the hook during the peak of the burning. Relatives in San Francisco called and asked if dad (he works near the refinery) had made it home. Dad assured the relatives that he was safe, and joked with friends from work on the phone. The burning was banal like a natural occurrence, yet we left the television on, to witness the act that had caused such a whirlwind of media attention.

The house rapidly became hot and stuffy. I wiped sweat from my forehead, and felt moisture collect on the brim of my tank top. Before the sirens, my mom had been frying fish and it smelled delicious. Now, the heat collected in the kitchen and took over the house with the sound of oil cracking over open fire as its own warning sound.

This house was built in the 1960’s and has always had poor ventilation. It traps heat and cold according to the season. Partly out of resignation and dark humor, my sisters and I joked about whether the explosion was a final sign to move out of our home. Over the last year, we’ve been considering a move out of our home, since its worth has dramatically decreased while the mortgage remains high. And the foreclosed homes on our street have only added to the neighborhood’s further devaluation. I leaned against the window because it felt cool, and imagined for a moment what it would be like to live somewhere in nature, removed from the flatlands and up high in hills. But even those places catch fire sometimes.

The magic hour, in film production, is when the sun dies down at dusk and there is a glow from the sky. Outside was like a movie, and inside was too hot and sticky. I opened the main door and walked outside to see the fumes. The street was calm; the inside of houses lit; the air above me painted with hues of purple, blue, orange and black.

My parents came out of the house and stood at the porch. I walked to the center of the street and with my 35mm camera took a picture of my parents and the smoke looming above them. They smiled, and it struck me. We live comfortably in smoke… and that, is the most unnatural thing.

I’ve lived in Richmond my entire life, and I’m very used to hearing the Chevron siren tests every first Wednesday. Like many others, I suspect, I no longer go through the motions of taking shelter as practice for an emergency when I hear those sirens. However, this is something that is very troublesome, especially in situations such as the Chevron refinery fire.

Like a lot of other Richmond residents, I sat contemplating for a few seconds thinking, “Is that the Chevron siren?” and thinking, “It’s not 11am on the first Wednesday. Is this an actual [emergency]?” After about a minute of pure confusion, logic set in and I went about investigating. I had heard two loud bangs just a few minutes earlier, and when I looked outside I could see the huge pillar of black smoke rising up into the sky. Only then did I go about closing all of the windows.

The next step for me was calling certain people. A neighbor of mine has only lived in the Bay Area for a little while, and I felt it was very important for me to call and make sure that they knew what the siren meant, and that they headed inside and closed their windows. After a few more calls, I sat back and started to watch the news. Live coverage was being shown of the fire, and I learned that it was indeed the refinery that was burning. And then it was just sit and wait, as every half hour the sirens repeated themselves, and the sky darkened, and slowly I began to wonder how long this fire would last, and how long the danger of the toxic smoke would loom over my home.

Asthma, smog, toxins – these are just a few of the things that plague my city, Richmond, California. It is a “port city,” home to a diverse community of people who have come here from various lands, with different convictions and pursuits. But most of the people in my community know little of the danger they place themselves in, simply by breathing the air here.

For that reason, I’ve had a personal vendetta against Chevron my entire life, before I even knew what an oil refinery was.

Thanks to Chevron, I grew up in a community where asthma was viewed as normal and smog was thought to be a part of the weather. When I was young, my sister and I saw the white smoke coming from the Chevron stacks and nicknamed them “cloud makers.” Little did we know, these snowy, seemingly harmless puffs of smoke actually were the cause of much of the environmental health risks that we were being unknowingly exposed to. For a few weeks during my childhood I even had to use an asthma inhaler, which at the time I thought was pretty cool, but in hindsight it is a sad image. I would never want my child to be in a circumstance to have to use a device to breathe.

As a native of Richmond, Chevron’s recent fire does not in the least bit surprise me. My question to Chevron’s officials is, where will they go from here? I’m sure they can’t reassure Richmond residents that something like this won’t happen again, as I’m sure they have such accidents accounted for as the cost of doing business.

I’m not too concerned about who’s to blame. I’m more concerned about what the next steps are to prevent things like this from ever happening again. Will Richmond residents be accommodated in any way? Can any amount of money or donations to scholarships be enough for Chevron to pay its due? I guess only time will tell.

Damn. Today was crazy. In the middle of our Romeo & Juliet workshop, we heard the Chevron sirens and looked out the window to see a huge black cloud of smoke rising from the refinery and moving towards us. Had to go into shelter in place at Making Waves with my students and my cousin whose in town filming a documentary about RAW and our upcoming show: a modern day rendition of Romeo & Juliet set in Richmond. “Verona” was definitely on fire today. We escaped the Chevron toxins light-headed and tight-chested, but ultimately we’ll be fine. 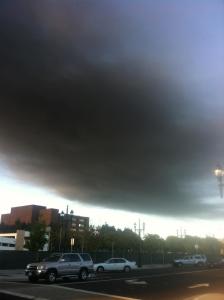 I’m more concerned about my students who went back to their homes under that hazy black cloud, who breathe in Chevron every day. 50% of Richmond residents have asthma. And that’s just one of so many environmental injustices. As Donte said yesterday, “Either weed smoke, gun powder or Chevron”. I am waiting for the clouds to part, waiting for the sun. Stay strong Rich City!