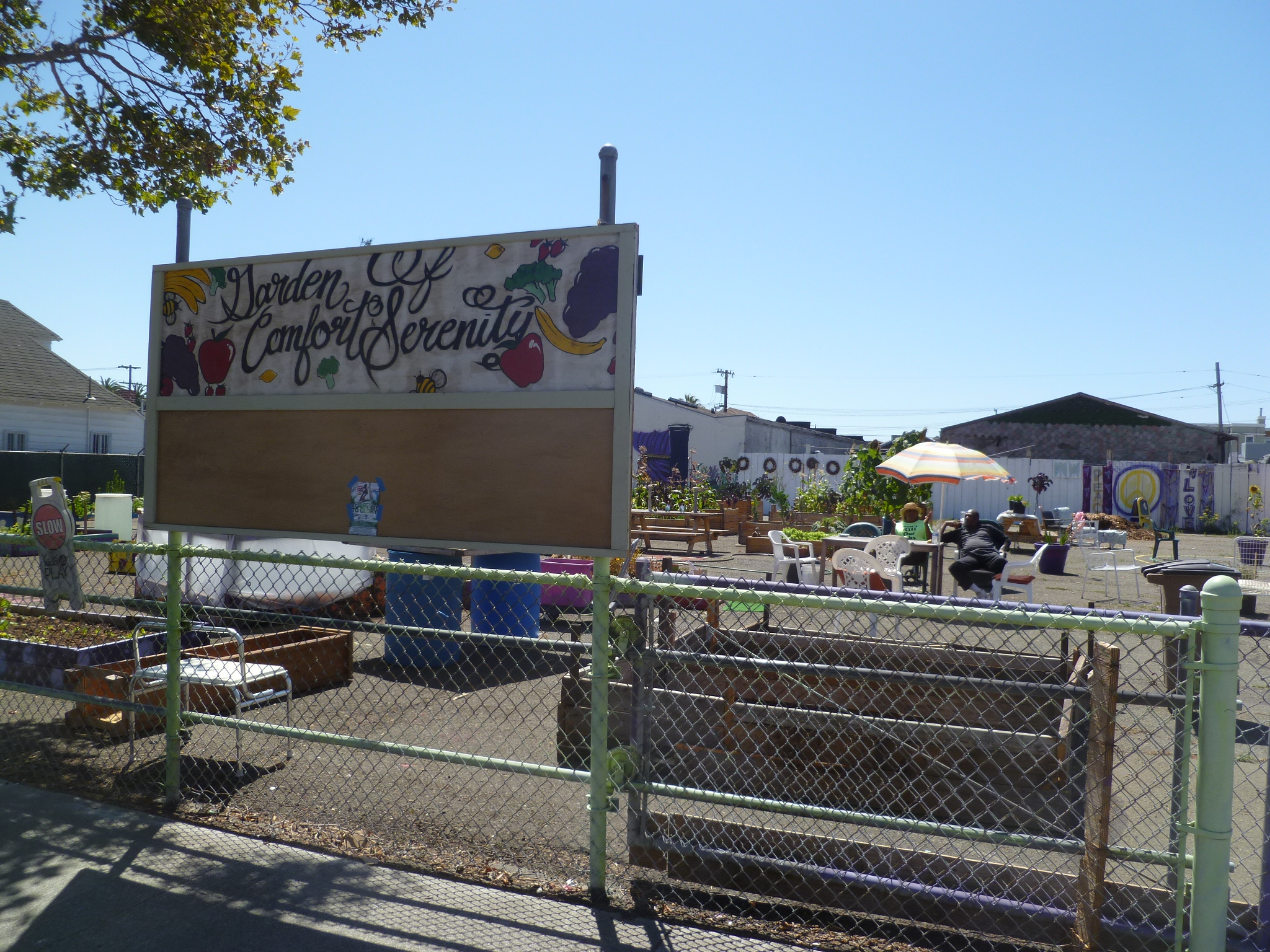 31 Aug Comfort and Serenity in the Iron Triangle

In the neighborhood known as the Iron Triangle, comfort and serenity can be found at the corner of 6th and MacDonald, where a once-barren lot is now host to chickens, rabbits, beehives, and dozens of blossoming garden beds. In and amongst this thriving hub of life, a burgeoning community has taken root and found peace.

“I definitely feel like it’s a privilege to grow your own food,” shares Lena Henderson, founder and director of The Garden of Comfort and Serenity and daughter of lifelong Richmond activist Lillie Mae Jones. “It keeps you grounded,” says Henderson. “It’s a nurturing environment.”

But it hasn’t always been this way. Two years ago, the roughly 2-acre plot of land was nothing but an abandoned parking lot, where the only things growing were useless weeds and Richmond’s crime rate. But in the heart of the Iron Triangle, long reputed as one of Richmond’s poorest and most violent neighborhoods, Henderson’s vision has proven itself resilient, transforming the vacant land into a powerful resource for community growth.

Like most things in life, The Garden of Comfort and Serenity started as a seed.

“First she had the mulch, and then she had the beds built,” explains Annette Howard, who lives adjacent to the garden with three of her daughters and serves as the garden’s co-director.

With input from Richmond’s Youth Build and Self-Sustaining Communities, a non-profit organization, the hard work and commitment of Henderson and Howard has resulted in not only fresh produce, but changed lives.

“People just show up,” Annette explains. “We get all kinds of people that come through and sit down and talk their problems out.”

Neighbors come to plant in the boxes; strangers also come, some to sit silently in peace, some to find an open ear and heart; homeless men and women come and receive fresh food; cars pass with a honk; people pass with a smile.

For longtime residents of the Iron Triangle, the change brought by the garden is palpable.

Her narrative hovers over the soulful tunes of R&B station 102.9fm, resounding through the solar-powered radio that is virtually always on, a signal to passersby that, according to Henderson, says, “welcome to our garden.”

“It’s really nice and soothing to put your hands in the soil and give all your problems to the dirt,” Howard says. There’s something profound about turning pain and sadness into beauty and life, a magic reaction that here only the garden seems to accomplish — a positive alternative to other routes so often taken by Richmonders, those of drugs and violence.

Yet the healing powers of the garden are much more than mental and emotional. By offering nutrition, exercise and relaxation, it has worked miracles for the physical health of those involved in the project. Leonard Tally, a long time friend of Annette, was recovering from heart surgery due to two clogged arteries, when Annette got him to start coming to the garden as a place to relax.

“Instead of just sitting at home, it’s more relaxing at the garden,” he explains. “[Annette] would give a lot of vegetables and different stuff for me to take home, and made sure I eat healthy.” The next time Tally went to the doctor, he was told he had made a marvelous recovery.

“It feels good to know that you grew something,” says Lynette, one of Annette’s daughters. “That the stuff you planted… changed something.”