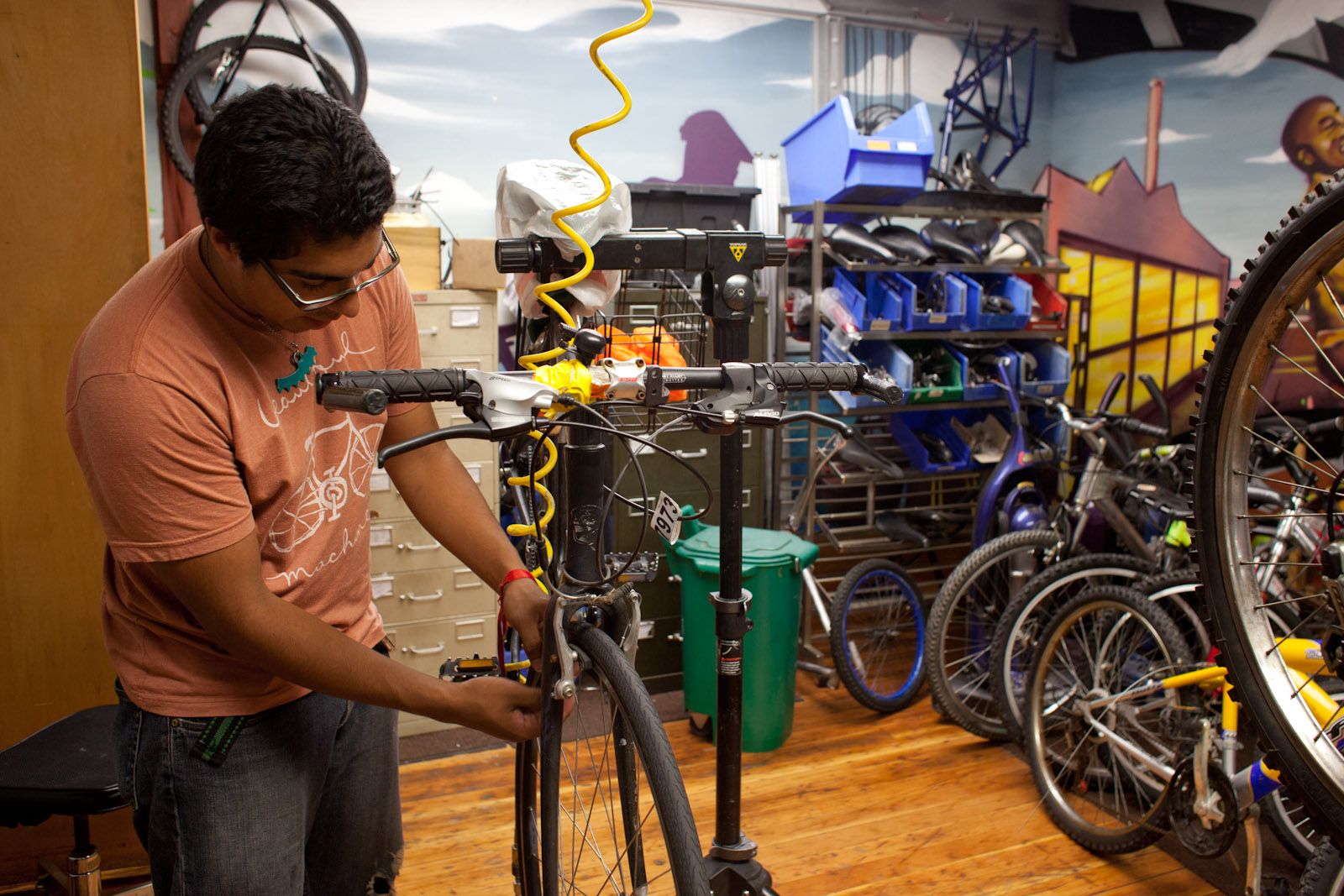 James Johnson, 20, is a bike mechanic. Born and raised in Richmond, Johnson has for years fixed bikes out of his own garage, all the while dreaming of opening up a bike shop where he could work with the proper tools, “without having to use hammers and stuff.”

Johnson’s dream became reality less than a year ago when – along with a group of other young people from Richmond, and under the direction of Brian Drayton, executive director of a non-profit called Richmond Spokes – he launched Spokeshop Bike Lounge, the only bike shop in the city.

“Spokeshop isn’t the regular bike shop,” Johnson said. “There’s not many bike shops where you can come in and instead of buying stuff just hang out, chat with the staff, come use the free wifi, and read bike magazines and stuff in peace, without people bothering you.”

Besides their welcoming atmosphere, Spokeshop has another element that sets it apart from most other businesses in Richmond: It is a cooperative, where all the members are both owners and employees – although, so far, none of the co-ops eight members are receiving a salary for their work.

“We are still working out systems,” Johnson said. “I definitely wanna… get paid, but I’m pretty much satisfied that I actually have my shop, because that is where all my money would have been going anyways.”

As the shop’s first anniversary approaches, members of the cooperative keep on showing up to volunteer their time in order to help it become a successful business.
“It is more like a split of profits,” said David Meza, 20, a co-op member. “We all equally decide what should be reinvested into the shop, and what should be [for] our personal gain. But [we put] the shop first.”

Helping Community, in More Ways Than One
“I like working on bikes because I think it’s a job that really serves the community in many ways,” said Roxana Alejandre, 21, a bike mechanic at the shop.

Alejandre echoes other members, who view the shop and their work as a community service; a way to help Richmond become a better city. Biking, they say, is not only a good way to improve community health by making exercise fun, but also a cheaper way to get around town, find better job opportunities and access better food sources.

“Most [businesses] give opportunities for jobs, but one thing they don’t give you is a way to get to that job,” said Johnson. “But with bicycles, not only are you giving (a person) a job but you are also giving (them) transportation, so you don’t have the excuse of, ‘I don’t have a way to get to work’.”

Filling a Need
Spokeshop Bike Lounge is one of the projects of the non-profit Richmond Spokes, the mission of which is to promote social and economic development through cycling.

Drayton, executive director of the non-profit, said he was approached by young people who told him they’d heard that he was “the person to call” if you wanted to grow a bicycle culture in Richmond.

“I came to Richmond and realized that there was no visible bike community, (yet) there is a large underground community of people that just bike until their bike fall apart and then they get another bike.” In addition to creating healthy opportunities for youth, he said, “The idea was to get some affordable bike repair here in Richmond and train people to build bikes and maintain bikes.”

In addition to Spokeshop Bike Lounge, Richmond Spokes operates other projects and services, like valet bicycle parking for public and private events, which Drayton hopes will build more awareness of the burgeoning bike culture in Richmond.

Youth Opportunity
Gerardo Lopez, 12, is the youngest staff at Spokeshop. He goes to school, but every spare moment he has he spends at Spokeshop helping clients, keeping the store clean and organized, and sometimes assisting the bike mechanics.

“My mom says it’s cool because I can have a lesson in life [about] how to build my own shop and how to do my own business,” Lopez said.
Like every other worker in the shop, Lopez doesn’t receive a salary for his work.
“I don’t really care about the money,” Lopez said. “I just want to help the community. I don’t come here for the money.”

“I had an idea for a design studio,” said Jari Smith, a volunteer at the shop. “I came here and eventually it grew.” Smith now has plans to launch her studio, which will be the first entrepreneurial business to spin off from the Spokeshop co-op.
“If we had a cafe within the bike shop, eventually that cafe is going to outgrow the bike shop and it will be time for them to launch their business,” Smith explained. “Who knows what kind of businesses could grow from that, from people congregating in the cafe, dreaming, creating goals, putting deadlines on those goals and branching out.”

According to Drayton, Spokeshop already has all the necessary equipment to start a cafe, but they lack the money for the initial investment.

Growing the Ranks
One of the big challenges facing the cooperative, said Drayton, is attracting new members and keeping them active. If a person wants to join, he or she must commit to doing 6 months of volunteer work at the shop, while getting trained by current members.

“In disadvantaged communities, it’s hard to incubate people,” Drayton explained, “because if it takes 6 months to train someone and they don’t have another source of income, we lose people.”

“As people realize what it is that we are doing, they get passionate about it,” he added. “But we all have personal lives, we all have rent and food and bills and things that rack up, so it is a challenge to stay on top of [everything].”

In the near future, Drayton hopes to find bigger funders that could support a salary structure for co-op members, even while they are in training, to sustain Spokeshop’s model and “keep it going.”