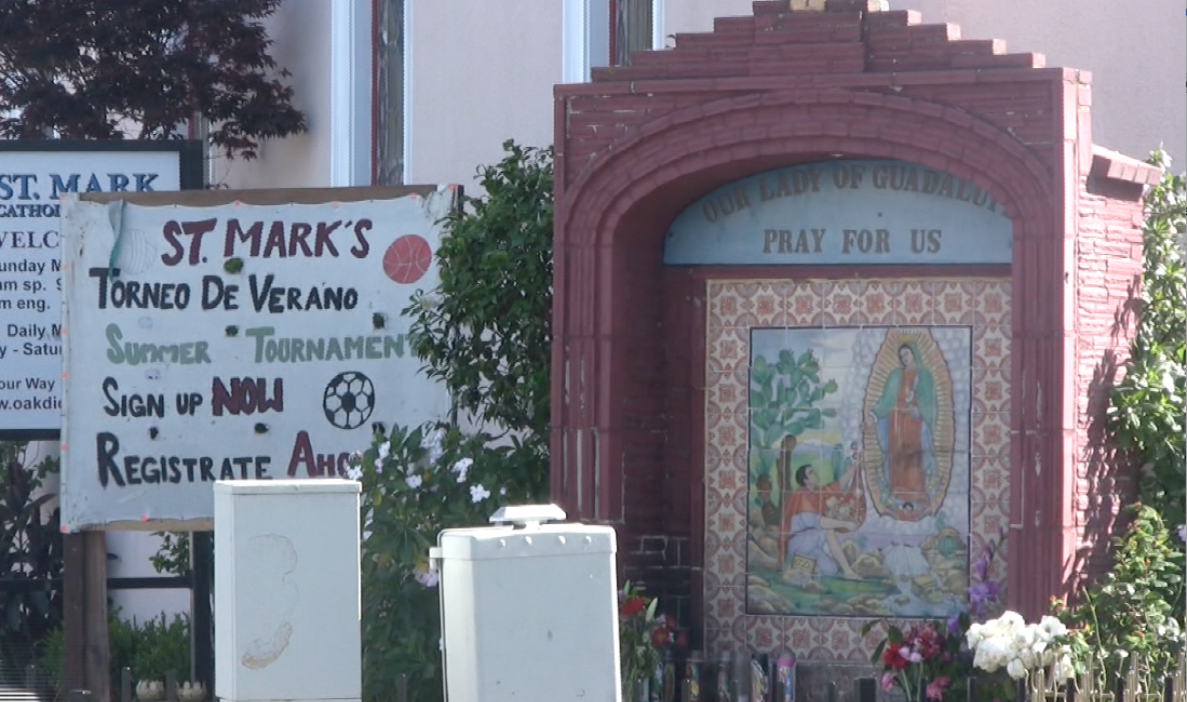 Q & A by Iraida Santillan

EDITOR’S NOTE: In Richmond, few things have been around as long as St. Mark’s Catholic Church, which this year is celebrating its 100th anniversary in the city. To find out more about this mainstay of the community, Richmond Pulse reporter Iraida Santillan sat down with the church’s current pastor, Father Ramiro Flores, for a discussion about the St. Mark’s of yesterday, and today.

Richmond Pulse: Can you tell me about the history of St. Mark’s church?

Father Ramiro: From my understanding, this is the oldest church in Richmond.
The church started in 1912 with mostly Italian immigrants that would come here. Then by the 1940’s a lot of African American people began coming and they were the majority here up until the 1970’s. In the 70’s there was another change, even though there was always a mix of different cultures and races. From the 70’s until now, it’s been mostly the Latino population, together with African Americans.

RP: How has the church survived so long?

FR: Actually, this is one of the poorest churches. There was a time when they wanted to close the church and the community here got together — African Americans and Hispanics — a lot of them helped to raise funds. They used to rent a house here from the church for somebody to live in, and that’s how it survived.

[Today we survive] mostly from donations from the church community — mostly the Sunday collection, and the yearly festival in the first week of October, which is the most important fundraising festival.

RP: How will you celebrate the 100th anniversary of St. Marks?

FR: The dates for the 100-year celebration are November 2nd and 3rd. We’re going to invite all the priests and pastors that have been here — at the beginning it was mostly Salesians. (Editor’s note: The Salesians were a Catholic group founded in the late 19th century that emphasized charitable work with poor children and families during the industrial revolution).

And on Saturday we’ll have a dinner with them and watch a film that we are creating about the history of the church since it was built. On Sunday, we will have a celebration with all the bishops and priests from this diocese to celebrate with us. And then we will have a get-together with the whole community to celebrate the 100 years of ministry to this community in Richmond.

RP: Would you describe yourself as not only a priest but an activist?

FR: Yes! Lately, besides being a pastor, I was taking a course in psychology, because I see the need. At this time, I’m going back into getting really more involved in the main social needs of the community. The former pastors and myself, we come from the same seminary where the focus was mostly pastoral, with the people. Not so much liturgical but pastoral — also with an emphasis on the liturgy — but really being there with the people, and helping them learn their needs.

We have St. Vincent De Paul distributing food for the needy. We have a place here in the office where we refer people to lawyers for immigration, or for different things. When there is family violence, we refer them. It’s like a one-stop referral place for people who have any kind of need. We refer them to places where they can receive health care.

We see a lot of fathers who are referred to us from [other churches] like San Pablo or from St. Cornelius, because (those churches) don’t have the services that we have. We even brought therapy services here through Catholic Charities. [For immigration matters], we bring lawyers so people can talk to lawyers freely and they can tell them whether their case is going to pass or not, so they don’t waste their time. This church is, we would like say, 70 percent immigrant when it comes to the Latinos, and there is also a population of African Americans here who work together with the Latinos.