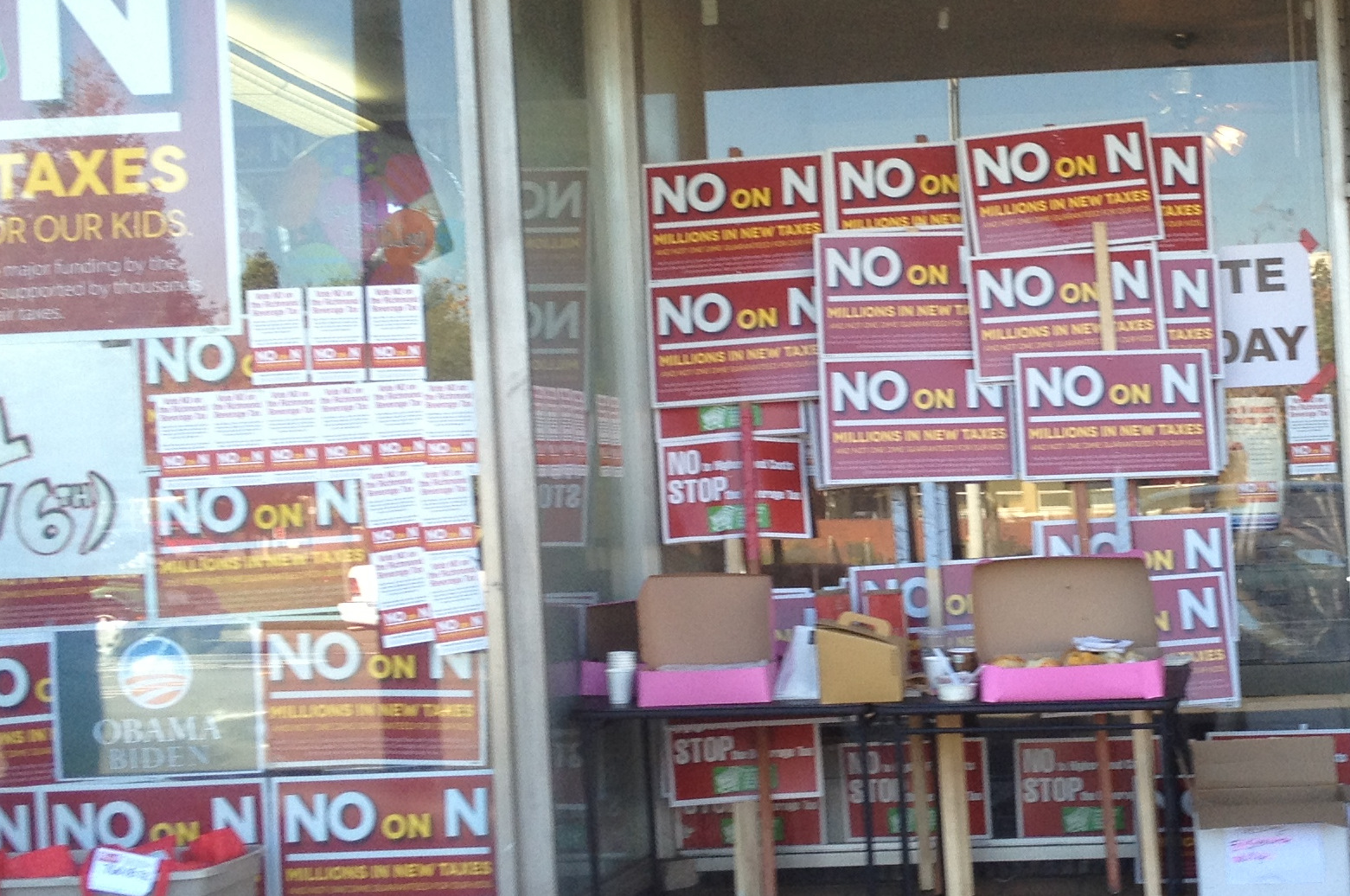 Billboards for No on Measure N, the controversial soda tax that voters here rejected on Tuesday, have been a constant image over the last several months as I rode my bike through the city. When I would stop to ask the people standing with “No” signs whether they personally opposed the measure, many admitted they were just working. In my view, that was the only benefit to the multimillion-dollar campaign.

Because of Measure N, this small, cash-strapped city saw one of the most expensive election campaigns in its history. The controversial ballot measure brought new faces to the table and new community involvement. It also brought in millions of dollars from soda companies in political ads, billboards and paid canvassers to defeat the measure.

In the end, the tidal wave of money spent by opponents of Measure N had its desired effect: 67 percent of Richmond voters rejected the measure that would have levied a citywide tax on soda. A similar bill on the ballot in the Southern California city of El Monte lost by an even wider margin, with 77 percent of voters rejecting it.

If they had passed, the measures would have made Richmond and El Monte the first cities in the country to place a citywide tax on soda. They were championed by health care advocates as an attempt to address the
obesity crisis – the two California cities have among the highest obesity rates in the state.

But the lasting effect of the soda tax campaign may have less to do with people’s health, and more to do with their pocketbooks.

“There’s very little [reason for] a city to [not put] a soda tax on the ballot,” said Richmond City Councilman Jeff Ritterman, who authored the measure. “Big soda drops millions in your town. They teach your disadvantaged youth how to phone bank and canvass, which are both useful skills. Unfortunately they fill their heads with misinformation so there is some downside, but this can be corrected over time.”

Now the young people at the youth organization RYSE Center are wondering whether the campaign will have any lasting effects on people’s drinking habits.

Jeffrey Martinez, a youth organizing hub coordinator at the RYSE Center who participated in community forums about the health effects of sugar, says the measure was “more for the community to be informed.”

Martinez, 15, was neutral on the soda tax but admitted it would have had a big impact on Richmond if it had passed. Whether the measure has changed people’s attitudes “depends on the person,” he said. “Some people don’t think it matters, and there’s others who are healthy.”

Keyannie Norford, a Richmond resident who was not able to vote this year because she’s under 18, didn’t have an opinion on Measure N but she was concerned with the extra cost it would have imposed on people. Norford was also under the false impression that the soda tax also would have taxed milk and baby formula. In fact, only sugar-sweetened beverages would have been taxed.

The issue of money was the main concern for Norford – even though she has dealt firsthand with the health effects of drinking soda.

“I used to drink soda with every meal and water was non-existent in my diet until one day when I had to be rushed to the hospital,” she said. “The doctor told me to stop drinking it (because) it was destroying my insides.”

Despite her own health problems, Norford opposed the tax, saying she disliked the idea of forcing Richmond residents to pay more.

If the soda tax had passed, the small Northern California city would have been a leader in the country, noted Sompong Vienguilai, a youth coordinator at the RYSE Center who took part in the Rethink Your Drink campaign this election season to educate people about the effects of sugar on people’s health.

Vienguilai, 21, said his own view of soda has changed a lot. He used to drink large quantities of soda, and then decided to abstain for two months. Now he drinks very little. But, he said, “If soda keeps being cheap, people will continue to buy it.”

Supporters of the soda tax argued that it was an innovative way to address the city’s high obesity rate. In Richmond, resources are scarce for nutrition programs, sports, and recreational activities. The tax would have allowed for the city to invest in healthy development, and studies found that it could have had a positive impact on the health of the city’s population, especially among its black and Latino residents.

Jonathan Perez, a 19-year-old Richmond resident, activist, and first-time voter, believes the soda tax would have been a positive step forward for Richmond.

“I think it’s worth paying a few cents to have more sports fields and extra recreational activities,” said Perez. But the young activist didn’t think the measure had changed people’s perspectives on soda as a health issue.

Soda seems to be as important to some people as religion. My grandmother drinks it every day. Like prayer, it makes her feel better. When she visited from Mexico a couple of months ago we had long talks about the big soda corporations. I told her about the negative impacts of soda, not just on her body but the environmental degradation corporations like Coca-Cola have committed. She understood. She even admitted to having kidney surgery and pain in her stomach that she correlated with her soda consumption. But she kept drinking soda.

Changing one’s diet, it seems, can be as hard as quitting cigarettes. Sharnae Cross, a 19-year-old youth coordinator at RYSE who was part of the Rethink Your Drink Campaign, agreed that the soda tax campaign did
not change people’s way of thinking about soda. “People already know it’s unhealthy,” she said.

Although the soda tax did not pass in either Richmond or El Monte, taxing is only one way to accomplish a goal. The measure united people, put the issue of obesity at the forefront, and educated many more people about their health.

Big soda companies came out victorious after spending millions of dollars on paid canvassers, billboards, and political candidates. But while the campaign may have brought in money to a city that needed it, money for the development of healthy initiatives continues to be scarce.

Most of the people I talked to in the streets had been misinformed on the measure’s details or opposed it solely by taking into account the money issue and not people’s health.

And the group that would have been most affected by the measure – youth — can’t vote anyway.

Children would have been the biggest beneficiaries of the measure. The soda tax would have helped children learn about nutrition so they could have made better decisions, and hopefully stopped lethal cycles of unhealthy eating passed down by their parents. About 50 percent of all children in Richmond are obese or overweight and 70 percent of them will most likely be unhealthy as adults. With statistics like these, supporters of the soda tax felt that drastic measures had to be taken. Perhaps the measure will be re-introduced in the next election season. If it passes, the benefits could be priceless.