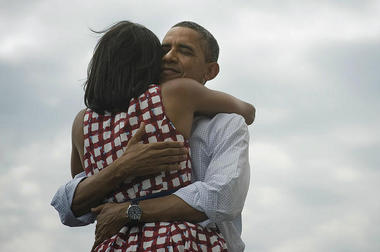 Posted at 17:01h in News by Pulse Editor 0 Comments

My reason for watching CNN on election night was different from the majority of most Americans for the simple fact that I don’t vote, so the results didn’t really matter to me. However, I’m not ignorant of the issues or about how politics work, and I wanted to see what people were saying after the polls closed.

What I didn’t realize was how much I was going to be affected by the final speeches given by each presidential candidate. It wasn’t the election issues they bought up (i.e. healthcare, abortion, gay marriage) that most affected me – it was the way both candidates treated their wives.

When President Obama was giving his speech, I noticed how elegantly he spoke, but it seemed somewhat rehearsed. However, when he got to the part where he spoke about his wife, he spoke with genuine emotion: “I wouldn’t be the man I am today without the woman who agreed to marry me 20 years ago. Let me say this publicly: Michelle, I have never loved you more. I have never been prouder to watch the rest of America fall in love with you, too, as our nation’s first lady. Sasha and Malia, before our very eyes you’ve growing up to become two strong, smart, beautiful young women, just like your mom. And I’m so proud of you guys.”

Obama’s speech proved to me that it’s important to take time out and love your wife more and more. Some married people complain, “Oh were just so busy, so we’re growing apart.” If the President of the United States of America, who we all can agree is VERY busy, can take time out to grow with his wife, spend time with his wife, and tell the world how much he loves his wife, then married couples should take the time to do the same to save their marriage.

One CNN commentator said after the President tweeted a picture of Michelle hugging him, “Americans just love a good love story.” I have to agree. However, this isn’t a movie or a book that an author can change up to end the way he wants it. A successful marriage takes time, effort, and patience among many other factors. I’m glad to have a new role model of how I would want my marriage to be.

Even the losing candidate, Mitt Romney, made sure to mention his wife when he conceded. He also looked at her with love in his eyes. I thought that was good to show because some young people do look up to him and to see the respect he’s shown to her may help other young people to realize that we should respect our significant others, and not take them for granted.

So even though I don’t participate in the elections, I still was affected and learned something. Simply: Love is and will always be beautiful.