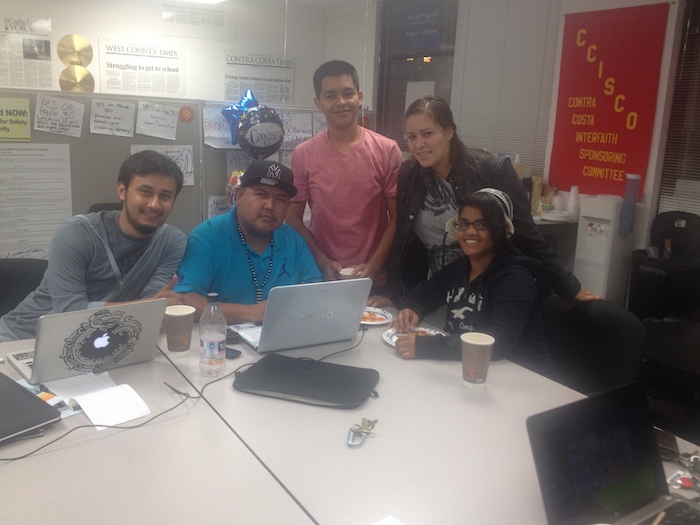 It’s a Monday evening in November at the CCISCO office in Richmond, and members of CLOUD, or Community Leaders Organizing Undocumented Dreamers, have come together to assist those interested in submitting a Deferred Action for Childhood Arrivals (DACA) application.

The landmark DACA program, announced by President Obama last summer, allows undocumented young people who, among other requirements, arrived in the U.S. before they turned 16 and were under 31-years-old as of June 15, 2012, to apply for a temporary work permit.

23-year-old Carlos Martinez, who describes himself as “undocumented and unafraid,” is one of the founders of CLOUD. On this evening, he is sitting at a table, ready and waiting for people to arrive. CLOUD was formed through CCISCO (Contra Costa Interfaith Supporting Community Organization) to educate the city’s immigrant community about the details of the new federal program, and to assist them in their applications.

Carlos has only lived in Richmond for about a year – he came to the Bay Area three years ago for college — but says he has already fallen in love with the community.

“I used to live in San Francisco and Daly City but I didn’t feel connected to the community,” says Carlos. But a friend of his lived in Richmond, and recommended the city to Carlos as a place he could call home. Following his friend’s advice, Carlos soon went to check it out.

“On 23rd Street, I saw the taco trucks and the Mexican stores and I was like, I wanna live here. (These are) my people.”

He ended up relocating, and soon began to feel like part of the community. Early on, Carlos began noticing the city’s potential.

Already active in the Bay Area’s undocumented rights movement, Carlos was impressed by the many “really humble people” he came across in Richmond. One such person was Jose Juan, another undocumented youth.

“We’re both undocumented (and) we both found CLOUD,” says Carlos.

Both, too, had experience with community organizing. Carlos previously had a hand in the creation of a resource center at City College of San Francisco for students impacted by AB109 – California’s prison realignment measure — while Jose Juan had been active in the Richmond community with groups like Building Blocks for Kids, where he developed an understanding of the needs of the community. Carlos calls it a perfect formula that led the two to co-found CLOUD.

“We both are going to benefit from deferred action,” says Carlos. “We knew Richmond needed this. We want to let people know that we are here to answer any questions that the community has.”

CLOUD’s main goal is to provide information about Deferred Action — things like who’s eligible and who qualifies, and to help community members apply for it. They also want to organize the undocumented community in Richmond, beyond deferred action.

“We see the bigger picture. We see that a lot of the population that lives here in this county is undocumented. Unfortunately they don’t qualify (for deferred action) so we also want to pass comprehensive immigration reform that includes all of us, not just a few,” says Carlos.

CLOUD has hosted two events so far, and has volunteered for a Catholic Charities event, giving out information and screening people to see if they qualify for DACA, services that provide to the community for free.

Yaquelin Valencia, 20, has lived in Richmond for 14 years, and graduated from Kennedy High School. She got involved with CLOUD at their first event, quickly recognizing the importance of the work they were doing.

“When I was in high school, I was organizing at my school. When I came on to CLOUD… I wanted to get involved and help the undocumented community because I knew there wasn’t another group like this here in Richmond.”

“We’re definitely starting something,” says Jackelin. “People are excited, just being part of a group — they say it feels like a family. As undocumented Dreamers, most of us, we value education (and) we value family because of the struggle (we’ve all been through).”

Deferred Action will allow young undocumented immigrants who meet the age requirements, who don’t have a felony or significant misdemeanor on their record, and who are either enrolled in school or have the equivalent of a high school diploma, to apply for work permits, a driver’s license, and avoid deportation for a renewable period of two years.

Understanding that DACA benefits are only temporary, CLOUD plans to stay in touch with the Dreamers who they help apply for Deferred Action. “You have a work permit for two years,” Jackelin says. “What about after that? We need immigration reform for everyone. What about our parents? They struggled so much. What can we do for them?”

Being connected to CCISCO’s deep community network of various interfaith groups across Contra Costa County has enabled CLOUD to make a big impact.

“[CLOUD] was formed by youth leaders from our different congregations and high schools, working with Carlos who was our DREAM summer intern (a position funded by The California Endowment) and our organizer Claudia Jimenez,” explains CCISCO director Adam Kruggel.

CCISCO, a multi-racial, multi-generational, interfaith federation of 25 congregations and youth organizations in Contra Costa County, is committed to building civic engagement and increasing public participation by those most affected by injustice and inequity in the county.

“Welcoming the stranger and the immigrant is part of our faith traditions,” says Kruggel. “We see the critical importance of standing with immigrant youth, so they can have a seat at the table of opportunity in this country.”

Krugell quotes the Scriptures: “The stone that the builders refused will be become the cornerstone.”

CLOUD and their civic engagement work with CCISCO has already made a huge impact in Richmond. On Election Day, their members knocked on 1,000 doors, targeting voters under 30, people of color and other voters with low turnout rates – all of which contributed to Contra Costa County having the fourth highest voter turnout in the state and the third highest approval rate for Prop 30, Gov. Jerry Brown’s tax measure.

“That’s a real shift in a county which has been a more conservative county, especially on fiscal issues; as well as in Richmond, where voter turnout is (traditionally) low,” points out Krugell. “CLOUD helped lead the largest volunteer civic engagement effort in this election cycle. They played a critical role in the region in reshaping what it means to be a multicultural society.”

Carlos says one of the reasons why CLOUD has enjoyed the success it has in Richmond, is the strong role of the church in community life.

“Most of our undocumented community is either Catholic or Christian. So If you want to outreach for an event, you can ask the priest to make a quick announcement.”

That’s how CLOUD was able to get over 300 people to attend their first event at St. Marks Church — the announcements at the church made all the difference.

“(Through CCISCO) we have also built a collaboration with Catholic Charities of the East Bay, located here in Richmond. They provide legal services for our events. It’s really important. We can provide information but some folks may have a difficult case and we can refer them to Catholic Charities,” says Carlos.

But Carlos says the beauty of CCISCO is that they don’t just focus on the Latino community — they also focus on the African American community.

“We need allies (and) CCISCO has been doing a tremendous job. Just connecting those two communities that live here… It’s something that’s new to me and think (both communities) can do amazing work (together) — like the campaigns to end mass incarceration and mass deportation. It’s something very powerful.”