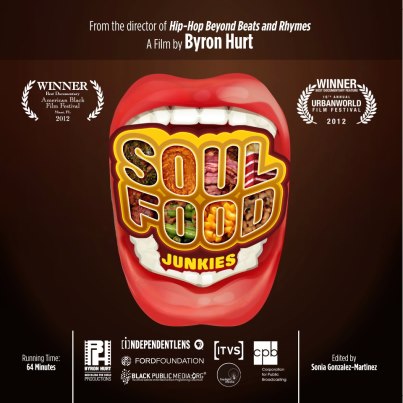 Posted at 18:01h in Arts and Culture, Health by Pulse Editor 0 Comments

Ed. Note: Writer, activist, lecturer and filmmaker Byron Hurt takes on tough subjects for the right reasons. His previous film “Beyond Beats and Rhymes,” explored the world of Hip-hop and music videos, and its affect on ideas of masculinity among youth and the black community. In his latest documentary, “Soul Food Junkies,” the New Jersey native examines the history of African American culinary culture, its connection to black identity and the impact it has had on African American’s health. It also digs into the growing food justice movement now taking root. The film airs on PBS Monday Jan 14th as part of the Independent Lens series. Hurt spoke with Street Soldiers producer Malcolm Marshall.

Richmond Pulse: Tell me about Soul Food Junkies and why you made this film.

Byron Hurt: The film “Soul Food Junkies” is a really personal and intimate story about my family and my relationship with my father and my father’s relationship with food, Soul food in particular but also fast food and other processed food. The story is about me sort of challenging my father to change his eating habits once he became seriously ill, and learning and realizing how difficult it was for him to do that. And then taking a journey to learn more about soul food’s history and why we’re so emotionally connected to the food. The film is humorous, informational and its emotional, and I think audiences will really appreciate it.

RP: How long did it take you to put this film together?

BH: I came up with the idea back in 2004 when my father was diagnosed with pancreatic cancer. I started working on the film in 2009, when I got my first funding. So we started shooting in June of 2009 and we finished in 2012 so it was about 3 years once we started production.

BH: This film is even more personal than “Beyond Beats and Rhymes.” I think it’s a better story. What I’d like the audience to get out of this film is to think a little more critically about the food that we consume: how we consume our food, how we prepare our food, the access that we have to food in our communities, or the lack of access.

I’d also like them to think about the healthy nutritious foods that we already have in our communities, and about what we can do on a regular basis to eat in a more healthy way so we can enjoy a longer and better quality of life.

I understand that changing one’s diet and eating habits is a very, very difficult thing. I’m not naive enough to think that the film in and of itself is going to do that. But I think the film will launch a lot of discussions and conversations around the country in households, among family members, friends and colleagues. It may prod some people to have some difficult conversations with a family member who may need to make some real serious changes to their diet.

RP: What’s the response been so far to the film?

BH: I’ve been showing the film around the country … Audiences start talking about their families and how they could relate to people in the film like my father, my sister or myself. And that was what I wanted to do; to make a film people could connect with and see themselves in.

When I went to see flicks like “Food Inc.,” or “Super Size Me” — both great films — one thing missing was that people of color, black people specifically, weren’t featured and we weren’t really reflected in the audience. This film speaks directly to us, African American people, people of color. But while its directed at us its also a very universal story that all people can identify with regardless of race and ethnicity.

RP: Soul food is a cultural term that has a lot of pride attached to it. Were there any sensitivities to putting it under the microscope in your film?

Soul food is part of who [African Americans] are, it’s a huge part of our cultural identity, passed down from generation to generation. It helped us survive, through slavery, reconstruction, the Civil Rights Movement … all of that. We have the right to guard our tradition, to maintain and hold onto what is ours because we’re always under attack by the status quo and people outside of our community. But even knowing that … one of the reasons I pay such close attention and I put so much care into my films is because I love black people and I love black culture and I would in no way throw my culture under the bus to make some sort of political or social point.

So for me it’s all about uplifting my community, about making myself better, growing and evolving and challenging my viewers to grow and evolve. That’s how you lift as you climb. That’s how you stand on the shoulders of your ancestors, and I feel a special obligation to do that.

Watch Is Soul Food a Sacrament or a Sin? on PBS. See more from Independent Lens.