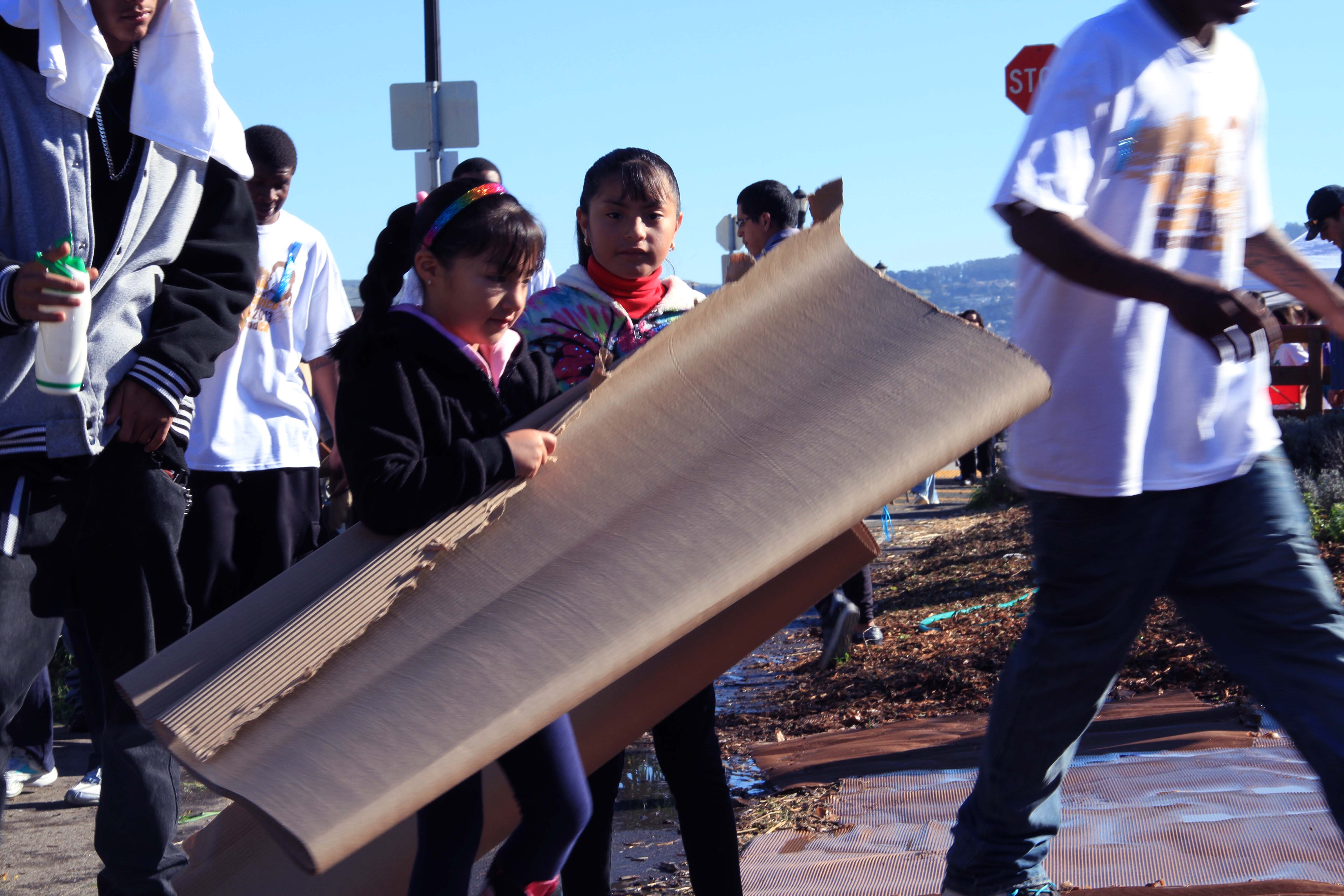 Teams of volunteers in white MLK t-shirts pushed wheelbarrows of compost and struck the ground with shovels for Urban Tilth’s 6th Annual MLK Day of National Service at the Richmond Greenway. Stretching from 6th Avenue to Harbour Way, the Richmond Greenway was host to multiple green projects and activities. By 9am, work was already underway on the many plant beds, and by the afternoon families and children strolled the greenway to the performing stages.

Along the trail, bilingual posters featuring quotes from Martin Luther King Jr. speeches were posted for the people to read. In addition to the projects, which included planting trees, mural painting and building sitting areas, numerous city organizations were on hand in their booths.

Alvino Rodriguez, 60, a grandfather, walked the Greenway with his family. He’s on a visit from Mexico, and said he was surprised by the activity on the Greenway. “It’s great to walk around, and see the progress of the city,” said Rodriguez. “The city is getting better, little by little.”

Near Harbour Way, Carmen Lee, 40, welcomed visitors to the Pogo Park booth and shared information on the non-profit organization that is leading the reimagining and building of parks in Richmond’s most underserved neighborhoods. Dr. Amahra Hicks presented a model of “Unity Park,” a community collaborative project to create a new park, and effort led by Pogo Park.

According to Dr. Hicks, “Unity Park” will feature amenities and play structures designed entirely by the community, an effort that has lasted three years. Today, Dr. Hicks was collecting signatures for future participation. “We want the community to be involved in this process. This is a very underserved community and Unity Park will put (in place) a lot of programs for the community to benefit,” he said.

Residents from Richmond were not the only ones volunteering. The event drew people from the nearby cities of Albany, Berkeley, Oakland and even Antioch. Marisol, 15, a student from Albany, found herself planting a tree on the Greenway for RichmondTrees, a grassroots organization promoting the growth of Richmond’s “urban forest.” The task of planting a tree was a new one for Marisol, but she was glad to participate and honor MLK through service. “It feels good to do something to honor Dr. King. There is not a whole lot of celebration where we live,” said Marisol, “and this brings everyone together.”