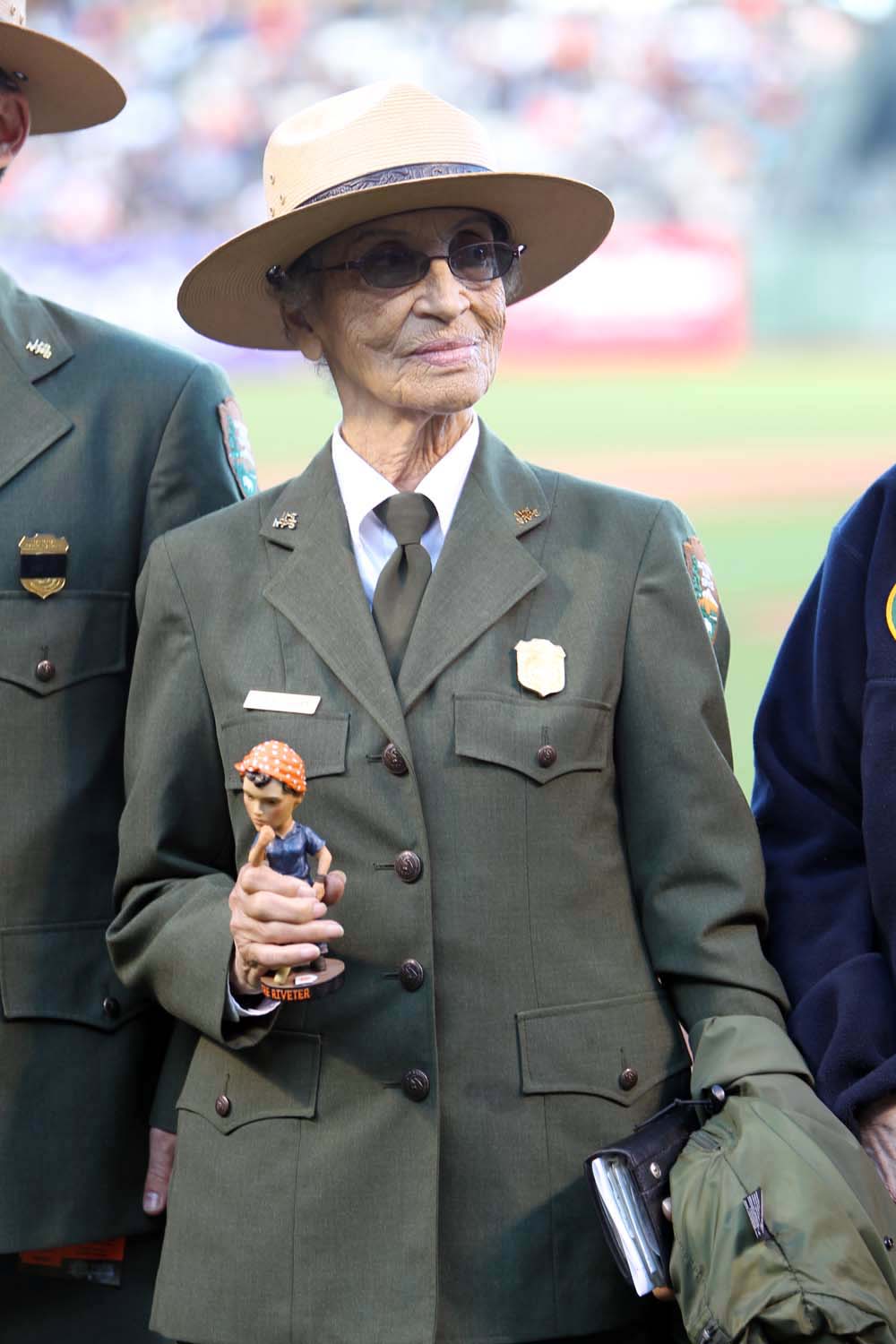 Posted at 20:32h in Arts and Culture, Elders, People by Pulse Editor 1 Comment

Betty Reid Soskin is our country’s oldest National Park Ranger and one of the most beautiful people I have met in Richmond. I had the pleasure of meeting her recently as she led a bus tour of the Rosie the Riveter/World War II Home Front National Historical Park in Richmond. According to Reid-Soskin, the park is home to the largest concentration of intact World War II historic sites in the country. The tour made several stops at key park sites, while reflecting on the African American home-front experience. Reid-Soskin’s charm, knowledge, passion and personal history made for a very special tour.

Born in Detroit, Michigan and raised in New Orleans, Louisiana, her family relocated to Oakland in 1927. During World War II she worked as a clerk for Boilermakers A-36, a Jim Crow era, all-Black union auxiliary. A Black woman who has seen both the end of segregation and the election of the country’s first Black president in her lifetime, Betty Reid Soskin is a local treasure whose understanding of local and national history is unique and insightful, and who at 91 years of age still has much to offer the Richmond community.

As the tour bus traveled from place to place — the Rosie the Riveter Memorial at Marina Bay, the Maritime Child Development Center, the SS Red Oak Victory Ship, just to name a few — the lives of a great era gone by called out to me. The old buildings, ships and restored sites, along with Reid Soskin’s narrative, brought the tour to life with stories of Blacks and Whites, Asians and Native Americans, all living together, not always harmoniously. Our tour guide didn’t shy away from that imperfect history, filled with racism and inequality. In fact, she embraced it while encouraging others to do the same.

“A Black man on the sidewalk in Jackson, Mississippi… would be expected, by southern tradition, to step off the curb if a white person approached,” she said, recalling the Jim Crow days. “That same man would find himself in Richmond, riding in the front of the bus, ten years before Rosa Parks,” she added. “Can you imagine what was set in motion here? Under that seriously flawed social system was a situation in which you had white southerners, mostly sharecroppers, coming here (to Richmond) expecting the continuation of white privilege, and Black people coming in with raised expectations. And the interplay of those people…how to negotiate, getting through each day and completing those 747 ships, and to do it without killing each other.”

Where some might look and see only a history of racial tensions and conflict, Betty recognizes seeds of change that are still bearing fruit throughout the nation today.

“They literally set the pace of social change, accelerated it to the point that social change still radiates out of the Bay Area into the rest of the country, because of what happened here. So not only is this the story of Rosie the Riveter, which is the impetus for creating this park, but also of what was set in motion here over that 20-year period between the war and the 60’s that changed the course of history. It’s that social history that interests me because it is just an amazing story of social change.”

In the long view of Reid-Soskin, Richmond is still a very young city, one made up of strangers. The history of Black people in Richmond, particularly, is not yet old enough to have worked its way into school textbooks, “so the kids have no way to learn what the migration that brought their families to Richmond meant,” she explained. “The people who were brought here were all required to do a very small part of a very large job (during the war). So until you can provide context in which people can understand their role in the bigger picture, I don’t think African American people in Richmond understand their importance.”

Reid Soskin sees Black history as still being relegated to a sub-category of American history, one that’s confined to 28 calendar days a year: “At some point, we need to move that into the national narrative because we are a part of national history.”

Her view of Black history and history in general, says Reid-Soskin, has evolved as she herself has, with age. It’s a wisdom that has given her keen insights into the very identity of the city she calls home:

“Community comes out of shared history, and we (in Richmond) haven’t lived long enough nor shared history long enough with each other to be able to learn from that or have community develop from that. We are too young as a city, and that’s true of the whole Bay Area. So we borrow things from other cultures at this point or we dogmatically try to cling to that which is Black and it keeps us from becoming part of the larger narrative, because we are still searching for identity — both as a people and as a city.”

Reid Soskin’s great grandmother, Leontyne Breaux Allen, was born into slavery in 1846 and died in 1948. “When she died it was three years after World War II ended, after my experience in the Jim Crow union hall,” she recalled. “I was 27 when she died, a full grown woman and a mother of two. My own mother was born in 1894 and died in 1995. My mother was 101 when she died. My great Grandmother was 102, and I’m 91. That means that all of this history since slavery happened within the lifetime of three women who knew each other. That’s how fast it goes.”

Understanding her place in history, Reid Soskin now feels empowered to bend it to shape, just by her being alive. And she feels compelled to share the lessons she has learned along the way, with as many as are willing to listen.

“Last December I was invited to the World War II museum in New Orleans. I was a panelist for three days (at a) conference for 500 people, all white. The hotel where the conference was held at, the Astor Crown Plaza Hotel, just outside the French Quarter… My parents could have only entered through the back door, if they had a service or delivery to make. That’s how much change has occurred in my lifetime. I want us to be able to go back and recognize that process, because in that lies hope for the change that we still need to go through. I know how far we’ve come because I’ve lived long enough to know that,” explained Reid Soskin. “My experience tells me that the arc is bent towards fairness and justice, just as Dr. King said it was.”