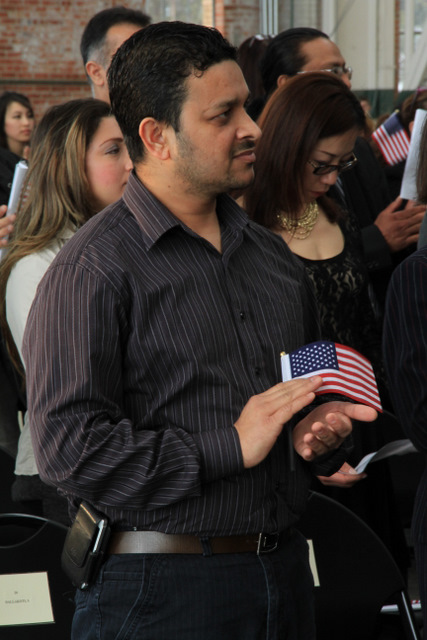 At Richmond’s Craneway Pavillion on March 5th, 75 immigrants from countries as varied as Yemen, Mexico and Japan, eagerly awaited their official certification as U.S. citizens. Carolyn Muzyka, the Western Regional Director of U.S. Citizenship and Immigration Services, announced each candidate to the public before leading them all in the Oath of Allegiance: “I hereby declare on oath that I will support and defend the Constitution and laws of the United States of America…”

Richmond’s own National Park Ranger, Betty Soskin, gave the keynote address, in which she reminded the new citizens of their responsibility to participate in public service. The Pledge of Allegiance was recited and met with great applause, after which President Obama congratulated the new class, via a recorded message. The new citizens were then called one by one and presented with their certificates. The ceremony ended with a procession by the Boy Scouts. All told, it was an historic day for the new citizens and their families.