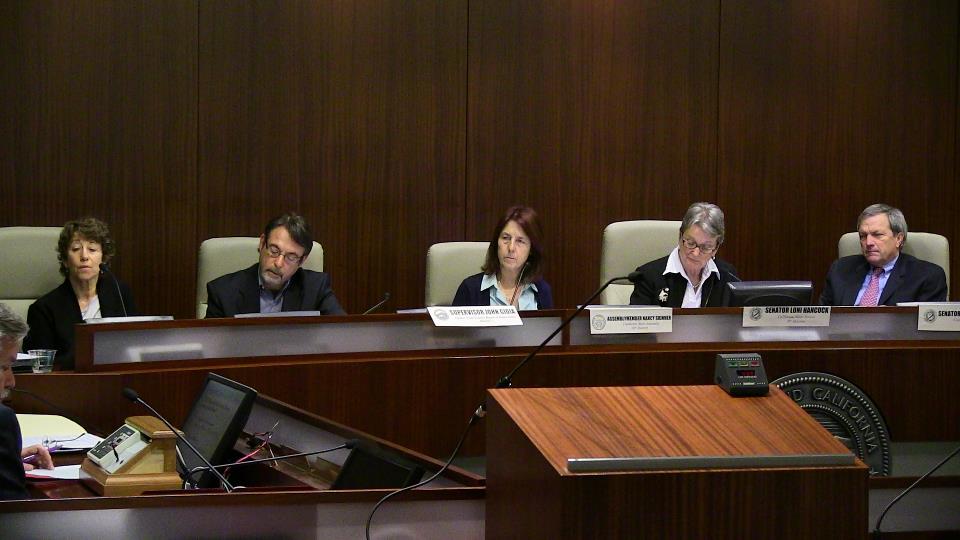 On April 5 a public meeting called by State Senators Loni Hancock and Mark DeSaulnier took place at the Richmond Memorial Civic Center to review what caused the Chevron fire and explosion last August. Federal investigators who attended the review determined that neglect by Chevron led directly to the catastrophe. Investigators also testified that the regulatory system in place at the refinery at the time of the explosion was a problem. A reported 15,000 residents sought hospital treatment due to the incident.

For our Question of the Month, the Pulse asked residents who testified at the public meeting: Are you still worried about health issues arising from the Chevron fire? And are you happy with what you’ve heard today about what is being done to address safety and oversight issues at the refinery?

I’m concerned. I’ve had to be hospitalized several times with respiratory ailments and I’m still not in too good of shape. Those people that sit on that panel — these are the people that are responsible for the health and the conditions of us in the city of Richmond, especially in North Richmond. They are supposedly responsible to us… but nothing gets done. Chevron knew what the problem was. This fire didn’t have to be.

I’m not happy with what I heard today because this has only been a big show that means nothing. All we’ve had is a bunch of bureaucrats sittin’ up there, they get their salaries and they go home at night. They don’t live here. They don’t have to feel what we feel. Their health isn’t impaired like ours is. They talk about the need for more inspections. They talk about better funding for their various agencies. They talk about shelter in place. Well, nobody told me how to stay and shelter in place. How long could I hold my breath when these noxious fumes are coming in my living room?

I don’t think anything’s gonna come out of this. They may decide that they wanna fine Chevron in some kinda way, but Chevron doesn’t have to worry. All Chevron has to do is find some of these dirty crooked politicians and they’ll put something in their pockets and they’ll manage, legislatively, to let Chevron off with a vote. We suffer. The community suffers.

Yes, I’m concerned about health issues especially since I’ve been exposed myself. The 15,000 local residents that reported to hospitals… there’s been no type of long-term consideration of those people.

I’m happy with the recommendations that have been made, especially the community panel that is going to be set up that would review the refinery, especially with the refinery in the process of doing a major expansion. But Chevron has been able to get off the hook historically with no type of oversight from the community. I’m glad that fines and penalties are being looked at and hopefully it will prevent accidents and hold Chevron accountable. We talking a fair equal playing field, not letting Chevron off the hook because they have political power and they are a large, major company.

Yes, I am [worried] because since the Chevron fire I have gone from a size 16 down to an 8. And it hasn’t been because of any diets. I haven’t [been] provided any doctors that I could go to if [I} don’t have medical [insurance]. I’ve lost my pet and I feel that Chevron’s not doing anything for the community. They haven’t provided any vets for our animals to go to if we can’t afford it. His (my dog’s) name was Capone — a longhaired Chihuahua. He was my companion, my protector and after the chemical spill (refinery explosion) in August he started getting sick and then he just got listless.

What I’m hearing today is what I heard at the first meeting that they had. It’s about what could be done, what should be done, what’s not being done and as far as I’m concerned, nothing’s being done. They’re just slapping Chevron on the wrist and they’re getting away with what they’re doing.

I’m anticipating that the outcome of this meeting is something of substance, something that will work. I told the elected officials today that I know my vote counts. I voted for three of them (elected officials) that were sitting there today. They have the responsibility to legislate some kind of active (emergency) plan for the people in the community, especially our senior populations that are not up on technology, texting, computers email, etc. (during the fire). My mother was watching the TBN station, which is a religious program. They don’t have scrolls on the bottom saying, “Hey Richmond, you have a problem going on.” They needed some means of communication to get to the folks.

I’m fortunate enough to live a little further away from the refinery so I don’t think I was personally affected that seriously. But I think there are an awful lot of people that were and continue to be, and that really concerns me. Especially the people who live close by. I think they’ve been marginalized, forgotten about. The monitoring system actually worked for me (laughing) — they called me three hours after the fire. The proof’s in the pudding. It’s good that they’re having the session, one more session about Chevron. I’ve gone to an awful lot of ’em and, what I want to see is, let’s see what actually happens. Do we have an effective real-time monitoring system? Are we gonna have another incident? Will the people who live nearby get protection? Will Chevron be a responsible citizen?