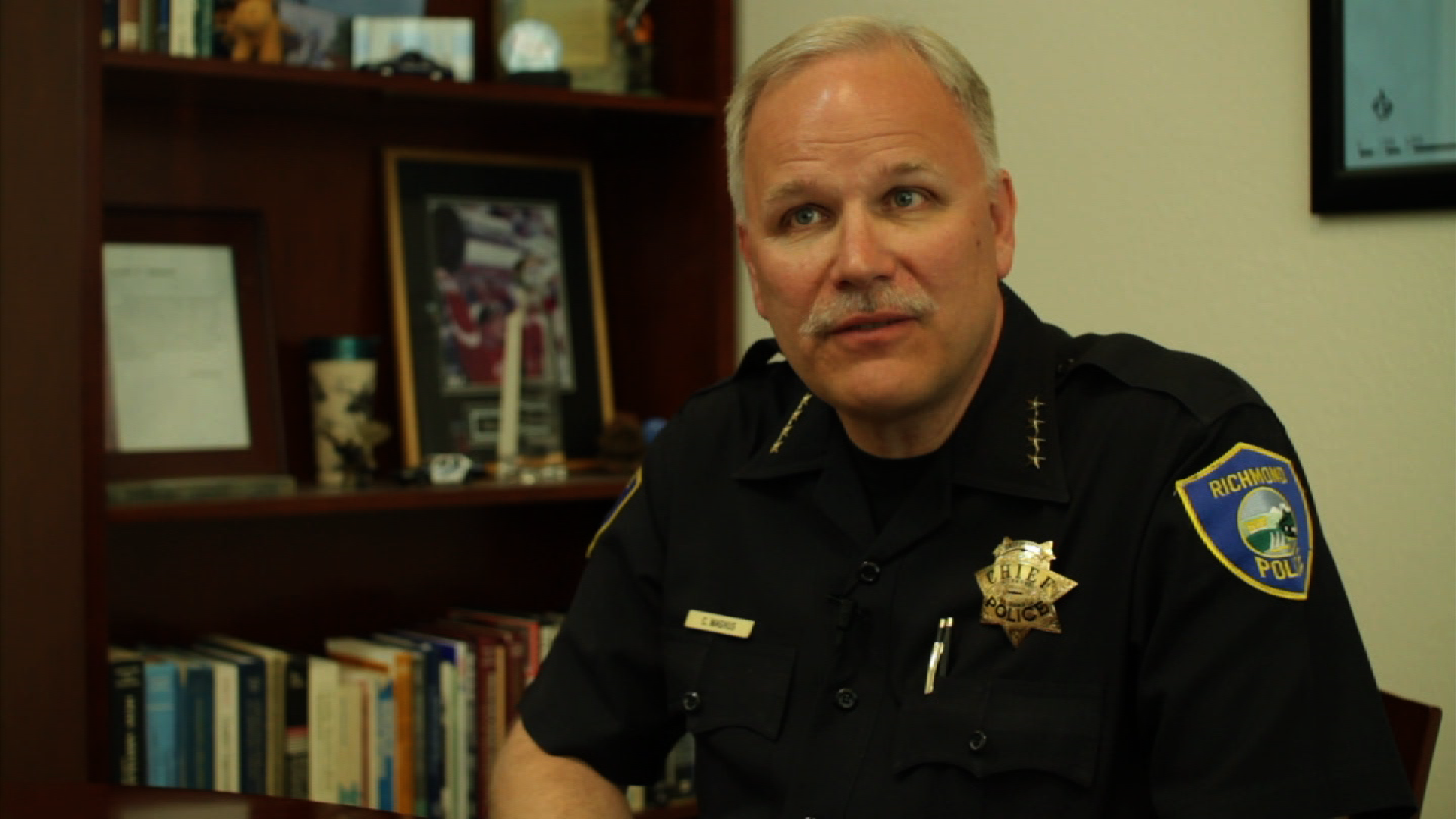 Posted at 11:21h in People, Police by Pulse Editor 0 Comments

Richmond Pulse: The recent allegation that Sgt. Michael Wang took bribes and tipped off drug dealers plays into a public perception in certain parts of the community that police in Richmond are dirty. If the allegations are true, is this just a case of a few bad apples or is it something endemic? What are you doing about dirty cops in the department?

Chief Magnus: As I understand it the allegations are being made by at least one individual who has already had considerable criminal involvement in the system. That said, allegations that in general terms involve corruption and misconduct are things we take seriously. As we became aware of those allegations, which was a considerable period of time before they hit the media, we began the process of an investigation, first internally and then involving the federal authorities to get to the bottom of what’s potentially going on.
At this point, whether the allegations are valid or not, I don’t know because the investigation is ongoing. Whenever we have allegations of serious misconduct that involve a member of the police department our practice is to open an internal investigation and if the allegations are criminal in nature we work with usually another agency to help us investigate those allegations. Depending on the seriousness of the allegations, and this would be one of those cases, we put that individual or individuals on what we call administrative leave with pay. That way they’re not interacting directly with the public. They don’t have police authority during that time period, but they are still being paid… it’s just like anybody else, you start with the presumption of innocence and then we have to prove that the person was actually engaged in what’s alleged.

We’re very fortunate that, especially considering the size of our department, we have very few allegations of serious misconduct and when they do come in we handle them very aggressively because we really want to maintain the public’s trust. It’s to our advantage and the community’s advantage to thoroughly look at these situations and make a determination. It’s always a balancing act because we need to protect the rights of the officer, and in fact officers have a whole series of rights under the Police Officer Bill of Rights, which was enacted through state legislation a number of years ago, and that entitles officers to certain protections and due process when allegations are made.
We’ll get to the bottom of it and then we have number of options…We can require additional training or we can use discipline. The discipline ranges from written reprimand that goes in an officer’s file, all the way to termination, depending on the seriousness of what’s alleged, and we have in fact terminated officers for misconduct in the past.
Engagement with the community is very important to the great majority of our officers. I mean they work hard to build strong relationships. Even if people, particularly in some neighborhoods or from some backgrounds, have negative perceptions of the police overall, we would like to get to the point where at least they feel they have a good relationship with at least one police officer, whether that’s the officer that patrols their neighborhood or an officer in the schools or wherever it might be. You build trust one relationship at a time and we’re trying to do that within the police department.
Obviously, when allegations like this are made it does reflect in a poor way on the department and that does concern everybody who works here because trust is something that takes a long time to build and it can be quickly eroded.

RP: In the last two months residents have endured a number of brazen daytime shootings, some fatal. Has Richmond lost the momentum it had in reducing gun violence? Is the homicide trend now going in the other direction?

CM: Well the trend is still down. Richmond, as I think most people understand, has violence that really becomes cyclical, it doesn’t go in a straight line down. We have our ups and downs and we’re making progress overall but obviously in the last month, we’ve struggled with some shootings.

I don’t think there is any one reason why gun violence has decreased overall in Richmond or why the homicides have gone down. I think some things that we’re doing have certainly contributed to that, but I think it really takes an overall community effort. Programs like Project Ceasefire are very important and the community is a major partner in that effort. The role of the faith community in doing night walks and being more engaged with a lot of these young men in particular areas of the city has been very helpful. An increasing number of groups that are reaching out to the shooters and trying to engage them in alternatives to crime, such as Men and Women of Purpose, Men and Women of Valor, One Richmond. There’s a number of community groups that I think are doing good things that are helping our efforts, and then I think we have better communication within the police department, between officers and detectives and our gang units, where we’re sharing information. Because it’s relatively a small number of folks that are doing these kinds of shootings… we’re trying to be really strategic about who we go after. We’re working with the other police agencies in the area, with the FBI, ATF and DEA and we’re working with our local probation and our state parole partners, so it really takes a combined effort of folks working together.

RP: You said that you will begin enforcing the daytime curfew for youth. Why is the curfew necessary and how can the curfew affect violence and homicides in the city?

CM: The daytime curfew is really designed to make sure that young people who should be in school, who are school age, are not out on the streets or in areas open to the public during school hours. A lot of the young people that are out on the streets may be both committing crimes or become victims of crime.
What we want to do isn’t just pick up a bunch of kids and either take them back to school or take them home but rather… we pick up kids and we take them over to our Police Activities League, and then we try to do a thorough assessment of what’s going on in the lives of these young people that would cause them not to be in school. In some cases they’ve fallen behind academically. In other cases it might be bullying or some kind of problem they were having with their peers or an instructor. In some cases it may be cultural, maybe there is a language barrier or they’re having trouble at home. There may be physical abuse involved. There could be a whole host of reasons, even a medical problem, why a young person isn’t in school.
We want to try to figure that out and then we require the young person and their parents or guardian to appear before the court. We have a special judge who works with us on the daytime curfew program. And the really great thing about her involvement, Judge Hiramoto, is that this is done outside of the formal juvenile justice system, so there is no petition that goes through Martinez, there is no criminal record involved for these young people. The judge is very engaged in talking to the family… then she orders specific services that they want the family to take advantage of. It could be an anger management program. It could be counseling services. It could be academic support. It could be any of a number of programs, maybe involving the RYSE Center, involving a whole host of different programs, and then there is a date set, usually in a month, where the young person comes back and we get a progress report as to what’s going on. The really cool thing about this is that we’re seeing that the recidivism rate among these kids, the likelihood of them continuing to be absent from school and out in the community is very, very low.
So, that’s kind of the idea behind the program… instead of just taking kids back to school or dropping them off at home and writing a $50.00 ticket that somebody just has to show up in court and pay. The focus here is really to understand why the young person is absent in the first place, and how we can work together with them and the family to deal with those problems.