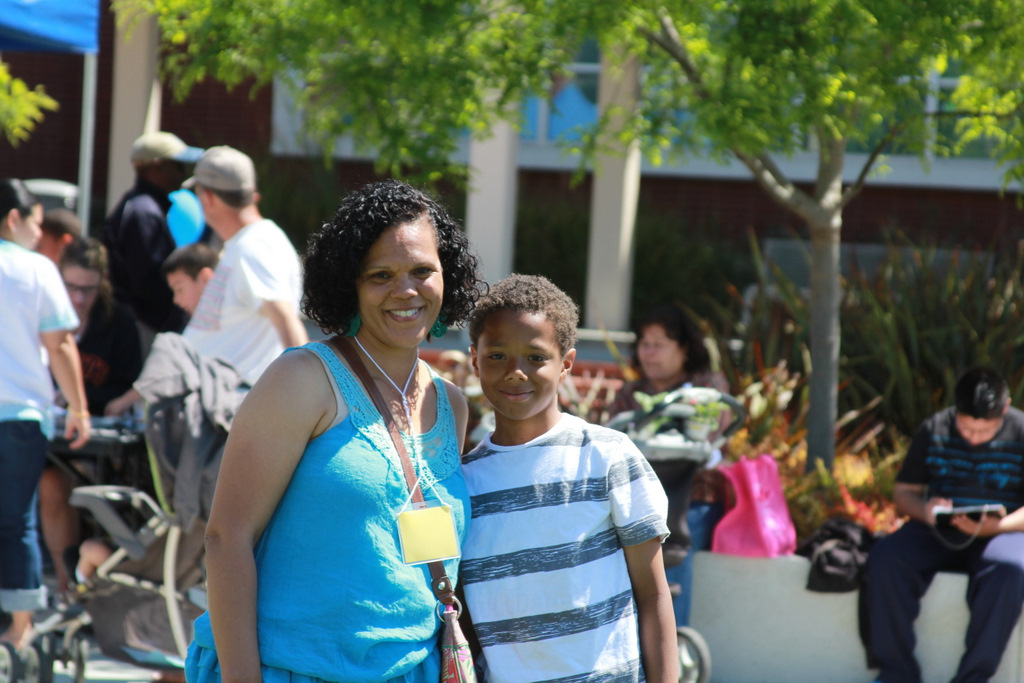 Posted at 15:22h in Arts and Culture, News, Youth by Pulse Editor 1 Comment

Civic Center Plaza provided a beautiful backdrop for the fourth annual Richmond Tales Fest on Saturday, April 20. The event is based on the book “Richmond Tales” by Summer Brenner, has grown to become one of the more enjoyable family events in the Bay Area. With its message of literacy and health, it’s also one of the most positive.

Numerous community organizations were on hand with booths, where they spoke to community members and handed out information about healthy living.

One of those organizations, West County Reads, distributed 5,000 books in both English and Spanish, including English/Spanish dictionaries, for free. All of the books were donated, many of them brand new. Children and parents alike took advantage of the giveaway.

Kids laughed and played, with many taking advantage of the free face painting and hula hooping.

At least 1500 people attended the festival, according to Tana Montero, community liaison for Richmond College Prep Schools and one the event organizers. The theme of this year’s event, she said, was inspired by the book, “Richmond Tales,” a novel that deals with many of the same themes event organizers sought to highlight.

“It’s about Mario and Myesha, two kids from Richmond who go back in time and learn about the history of Richmond,” Montero explained. “They also get to see a glimpse of the future of what they’re doing. Myesha’s… an urban gardener [and] Mario has a family neighborhood clinic. Everything we wanted to showcase here was literacy, health, eating healthy, growing your own [food], family, and showcasing the kids.”

Now in its fourth year, Tales Fest has grown from its initial beginnings as an event catering to the Richmond College Prep community in the Nystrom-Lincoln-Coronado area, to now serving the entire city and beyond. A contribution from Kaiser Permanente of $5,000 helped with the expansion. “When we were able to get that kind of seed money, we were like, we can invite all of Richmond, all the Title 1 schools, Richmond and San Pablo,” said Montero.

Glenda Monterroza, Community Benefits Specialist at Kaiser and a member of the planning committee, has seen the event grow over the last several years. “It’s an event that attracts a lot of different families,” said Monterroza. “We’ve partnered with West Contra Costa Unified School District so that they can help spread the word. A lot of different community partners came together for this event.” Over 30 community based organizations participated in this year’s festival.

Eddie Davis, 10, of Richmond, and his mother Nicole attended Tales Fest for the first time. “It’s cool because it gives the kids something to do plus there’s a lot of information out here — like the Rosie the Riveter museums that are in Richmond. I had no idea. It’s a nice day out for the kids and the grown ups.”

Vergil Weeks works with Richmond’s LEAP (Literacy for Every Adult Project). Weeks said LEAP is happy to promote the event every year because it emphasizes reading. “The community will be stronger if its level of literacy is high,” said Weeks. Furthermore, said Weeks, there will be job growth in Richmond “when we have a workforce that can understand and function within a modern system.”

In the 15 years Weeks has worked for LEAP, he said the organization’s clientele has gotten younger, while the level of literacy has gotten lower. “We have to go back to the basics. It’s about teaching them how to learn before I can teach them something. The manual learning and getting them back to the discipline of learning is what’s the key here. It’s not something that can be instantly obtained.”

The Richmond Tales Fest also served as the kick-off of Screen Free Week – a national celebration where families, schools, and communities turn off their TV screens and other media for seven days to promote healthy alternatives to televisions and video games. “We know that families that tend to do something active like walking together… tend to be healthier,” said Monterroza. “Specifically [in] the African American and Latino populations, obesity is a big problem. Hopefully they will realize that TV is not the only way to something fun together.”

The spirit of community was out in full force for this year’s event. Author Summer Brenner and actors from the cast of the stage version of “Richmond Tales” perfomed readings from the book. Mothers, fathers and children all had smiles on their faces. The weather was perfect and everyone felt safe. Families went home with big bags of books, and many people signed up for library cards. It was, said Monterroza, “the best Tales Fest yet.”