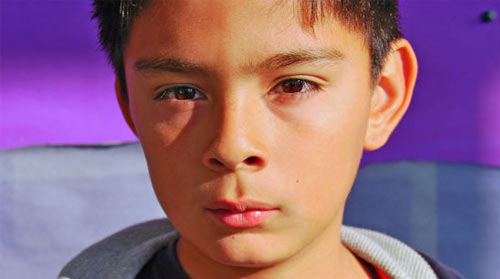 Posted at 18:18h in Immigration, Youth by Pulse Editor 0 Comments

Ed Note: On January 10, 2013 nine-year-old Rodrigo Guzman was detained along with his family by Immigration and Customs Enformcement (ICE) along the Texas-Mexico border. After determing their visas had expired, the family was sent back to Mexico and told they must wait five years before reapplying for a visa. Social Justice activist Mable Yee is the mother of twin boys, Kyle and Scott Kuwahara, who are Rodrigo’s classmates at Jefferson Elementary School in Berkeley, California. They are in the forefront of the Bring Rodrigo Home – Kids For Kids campaign that was launched March 19. NAM reporter Semany Gashaw interviewed her.

New America Media: How long has Rodrigo been in this country?

Mable Yee: Rodrigo has lived here continuously since he was 18 months old and he has attended public school at Jefferson elementary the entire time.

NAM: You say he and his mother have been going to Tijuana every six months to renew their visas. So what happened on this trip?

Yee: August 2011 was the last time that they renewed their visas. On that visit, the border patrol remarked that Rodrigo’s Spanish was very poor and his English was really good. That worried the mother, who was concerned that they might think that the family had been living long term in the U.S.

When they were returning to the U.S. from Mexico last January, they flew into Houston. ICE detained them. The boy and his mother were separated from the father, who was questioned for hours with security guards watching the entire time. ICE finally told them that their visas had expired and that they were going to be sent back to Mexico.

While the father was being interrogated, young Rodrigo said he was hungry. The mother asked a security guard if she could buy him some food. The security guard said ok, and he brought him a bowl of soup. But before Rodrigo could eat the soup, the guard demanded that Rodrigo give him his visa and passport … They took it and then stamped “cancel” on the visa. To this day, the boy blames himself for the whole mess.

NAM: How did Rodrigo’s friends respond when they heard he wasn’t coming back?

Yee: Very badly. When my twin boys, Kyle and Scott, came home from school, Kyle told me, “Rodrigo isn’t coming back.” I asked why and he said “because of visa problems,” but he didn’t really know much else. Kyle also told me: “The kids in our class are really angry and we want to go on a hunger strike and we want to hold a rally!” He told me they’ve been learning about Martin Luther King and Rosa Parks, and they knew about Cesar Chavez and his hunger strike. And he said we’ve got to do something to help bring Rodrigo back. I encouraged them because after all I’m a social justice advocate.

NAM: Did the kids understand what actually happened to Rodrigo?

Yee: I explained to them that in order to be a citizen of this country, you have to either have been born here or become a (naturalized) citizen. These kids understand the concept of social justice. My son says: “We are taught about Martin Luther King, Rosa Parks and Cesar Chavez standing up for other people’s rights. But who is fighting for Rodrigo’s rights?” Kyle said it is our turn and our time to stand up like Martin Luther King and Yuri Kochiyama. We give them all this information and now they actually have an opportunity to put into action the lessons they learned in class through their history books.

NAM: Do his classmates keep in contact with Rodrigo?

Yee: My sons and I regularly Skype Rodrigo and his mother. Even though he’s in Mexico, it feels as if he’s in the next room. When Rodrigo was here, he would play a game called Minecraft, a popular online multi player platform game where you can build communities. It’s like a 3D virtual Lego world. So the kids play online together.

NAM: Take us through the Bring Rodrigo Home – Kids For Kids campaign.

Yee: I developed a strategy, involving the City of Berkeley and the school district to provide institutional support for Rodrigo’s family. The Berkeley Unified School District and the Berkeley City Council unanimously passed resolutions. The City council’s included sending letters to President Obama, Senator Diane Feinstein and Congresswoman Barbara Lee urging them to grant humanitarian parole for Rodrigo. My son, Kyle, personally wrote a letter to President Obama. It has been translated into Spanish, broadcast on the radio and read on the Internet.

I found an immigration attorney who spoke directly with the family. She interviewed the parents and said basically they had overstayed their visas and that ICE was within their rights to turn the family back. But she said if the family were fortunate enough to have a legislator sponsor a private bill granting humanitarian parole and it was approved, they could be able to return legally. This could happen if enough public outcry and media attention were generated for their case.

NAM: Are you optimistic about bringing Rodrigo back home?

Yee: Yes. We met Congresswoman Barbara Lee at her immigration town hall meeting a few weeks ago in Oakland, Calif. Our kids and parents got a private meeting with her for 10 minutes. We skyped in Rodrigo and his mother live from Mexico. Rodrigo asked her if he could have a second chance to return to his home. Congresswoman Lee was so moved. She said: “I will do everything possible to bring you home Rodrigo.” He then asked her: “Can you please invite my classmates to go to Washington DC to speak for me because I can not speak for myself?” At this, she turned to the kids and said: “You are all invited to Washington, DC, and I need you to come and speak to my congressional colleagues about the need for immediate and comprehensive immigration reform.”

Rodrigo is the face of immigration. He is an innocent child caught in the middle of this mess for which he cannot be blamed. He is as American as you and I are.