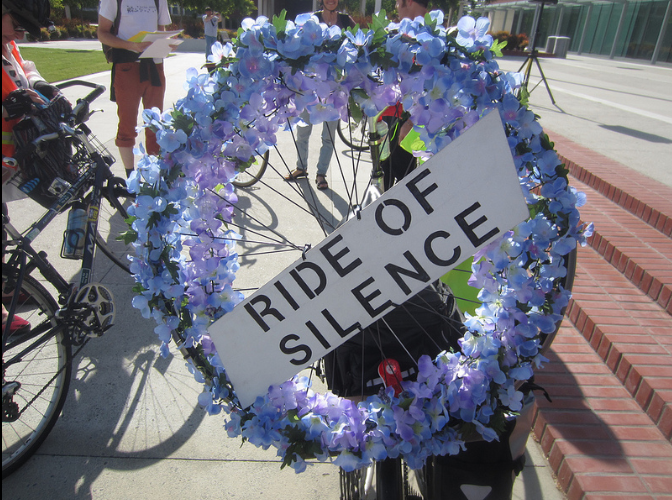 Posted at 10:35h in People by Pulse Editor 0 Comments

Last March I was riding from Richmond to San Leandro on a freestyle bike, on the way to boxing practice. Traveling through rush hour traffic, I was being extra cautious. Nevertheless, a white SUV honked at me from behind. At first I ignored it and kept my pace. But as the traffic ahead of me sped up, the lady motorist became more aggressive and started honking her horn, repeatedly. There was no room for me to move to the side so I attempted to speed up, but I was run off the road. My front wheel hit a pothole, throwing me off my bike, face first. I landed, gliding on my shoulder for several feet. My backpack fell off and the contents were hurled all over the ground. I blacked out for a moment and when I came to, I was relieved to be alive.

I felt as though time had slowed down as I struggled to get back to my feet. I was disoriented, and my shoulder was out of place. Did I break my arm? Was my shoulder dislocated? I looked around to get a grasp of where I was, and went to pick up my backpack. I could not understand how it had come off my back. One of my shoes had come off, and my hat was in the street. As I reached down, I felt my right shoulder ache. I couldn’t lift my bag. I realized the lady in the SUV had stopped for a moment. I stared at her as I attempted to lift my arm and she sped away, as her eyes met my pained gaze. No other cars stopped.

I eventually made it home, disturbed by what had happened – or hadn’t happened. Nobody had bothered to offer me a ride to the BART station, and the motorist who’d stopped for that brief moment neglected to even step out of her vehicle to see if I was ok.

I didn’t have health insurance so I never went to the hospital, and I didn’t bother to file a police report. It took two months for my shoulder to heal and get back to normal. Although it took time, effort and a lot of pain, I could eventually lift my arm again. I determined on my own that my shoulder must have been sprained.

That same year, in the City of Richmond alone, there had been 18 cyclists who were injured in traffic accidents and three others killed. Several of my own friends had experienced being run off the road, hit or badly injured while riding a bike.

That was the year I decided, for the first time, to participate in the Richmond Ride of Silence, a global event that honors bicyclist who have been injured or killed while riding, and raises awareness of the need for cars to share the road.

This year marked the tenth anniversary of the Ride of Silence, but it almost didn’t happen this year in Richmond. The event was first brought to my attention by Adrienne Harris, a founding member of the Richmond Bicycle and Pedestrian Advisory Committee (BPAC), who hosted last year’s event. When Harris described the purpose of the ride, I felt strongly that it needed to continue in Richmond, so we lobbied for some support and ended up receiving the support of Richmond BPAC chairperson Nancy Baer, and Mayor Gayle McLaughlin. We planned out the ride and in the end we pulled it off, bringing the Ride of Silence to Richmond for the third time. About 40 people participated.

With help from city leaders, notably Mayor Gayle McLaughlin and city councilmember Jovanka Beckles, a number of improvements have been made to Richmond streets and infrastructure that make the city safer for cyclists. Yet with a growing number of people riding bicycles on Richmond streets, the work to create safer conditions for riders must continue. As our numbers grow, the idea of drivers sharing the road with cyclists is one that must continue to be emphasized.