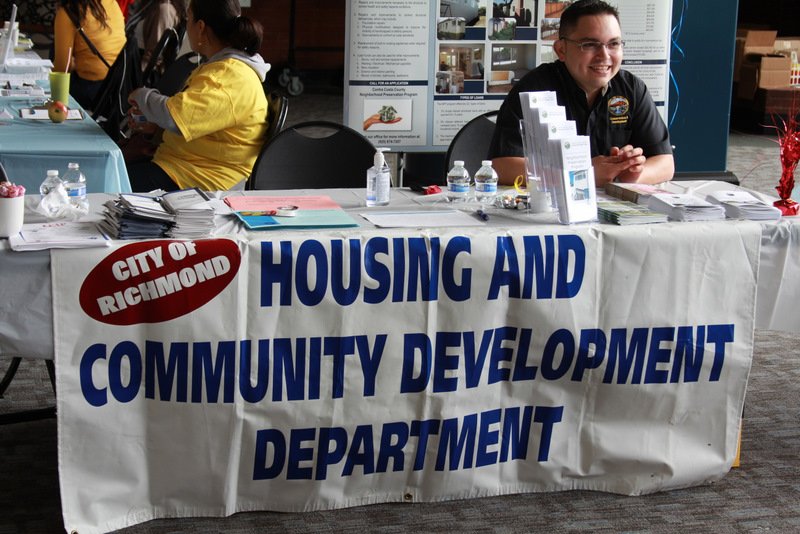 For years Gregory Greer has gotten up in the early morning hours to make the 15-mile trip from his home in Vallejo to his job as a property manager in nearby Richmond. A renter, Greer and his wife, Wynona, say owning a home in Richmond would be an “answer to our prayers.”

The pair recently attended a workshop in Richmond offering homeowners and potential first-time homebuyers like the Greers advice on everything from securing loans to home maintenance and managing foreclosures.

“I deal with several buildings here in Richmond … I’m working on a lot of homes so I would like to have my own,” says Greer, noting that a home in Richmond would allow him to spend more time with his family. “A new home would mean stability, happiness and a piece of the American Dream.”

Co-sponsored by the City of Richmond and the NID Housing Counseling Agency, the 2013 Housing Resource Fair was held on June 15 at the Richmond Memorial Auditorium & Convention Center and drew a large crowd of attendees.

“Services are here on site for any distressed homeowner needing assistance with their property,” says Nancy Rivera, senior housing counselor with NID, which works to improve the quality of life for low-income residents in cities across the country. “Attendees can get one-on-one assistance for possible loan modifications … we also have classes for first-time home buyers.”

Vendors, including Home Depot, Chase and Wells Fargo were also on hand to answer questions and provide information.

“Visitors have the opportunity to get down payment assistance, to talk to different servicers for possible loans and to local real estate agents,” explained Rivera.

The city of Richmond is still reeling from the effects of the recent foreclosure crisis. A report released last month by the social justice group Association of Californians for Community Empowerment (ACCE) revealed that 900 Richmond families lost their homes in 2012 and that 4,600 local homeowners were underwater on their mortgages by about $700 million.

The Contra Costa Times recently reported that a coalition of city leaders and housing rights advocates is moving forward with a plan to use eminent domain to help the city’s distressed homeowners. The plan, which would be the first such in the country, calls for the city to purchase distressed mortgages from lenders and refinance them for current owners at lower rates.

And while opponents, including the local Chamber of Commerce and the banking industry, warn the plan would dry up existing credit and could plunge the city further into crisis, supporters say it would help balance the scales in favor of homeowners.

“The people who peddled loans to us no longer cared if the loans succeeded,” Amy Schur told the paper. “They don’t lose when we lose … and often loan servicers actually do better when we fail, when we foreclose.”

Patrick Lynch is the director of Richmond’s office of Community Housing and Development. He says that while his office is working to “stabilize the neighborhood,” lingering high unemployment – currently at 11 percent – and credit card debt impede the ability of many residents to transition from renting to owning.

NID’s Rivera says such issues make it all the more critical that people are equipped with the necessary information.

Mike and Kimberly Hill purchased their Richmond home in 1999 and attended the fair hoping to get information on how to lower the interest rate on their loan.

“We’re trying to find outside resources to work with us,” says Mike Hill, noting that to date Wells Fargo, which holds the loan on their home, has refused to cooperate. Both he and his wife say they were victims of predatory lending. “A lot of people are in this situation and [the banks] are just telling us to wait and maybe we’ll qualify for another program.”

The Hills say they’ve had to navigate a dizzying maze of financial and legal advisors as they seek help holding onto their home. “When you have to get an attorney to help deal with the bank, you have to ask whether the attorney is reputable or if they’re simply after your money.”

The Hills were eventually directed to a refinancing program at the event, though they remain skeptical about the bank’s willingness to lower the rate. “We’re still making the payments … but the rate just keeps rising, and it’s going to keep rising until it reaches that point where it’s no longer affordable.”