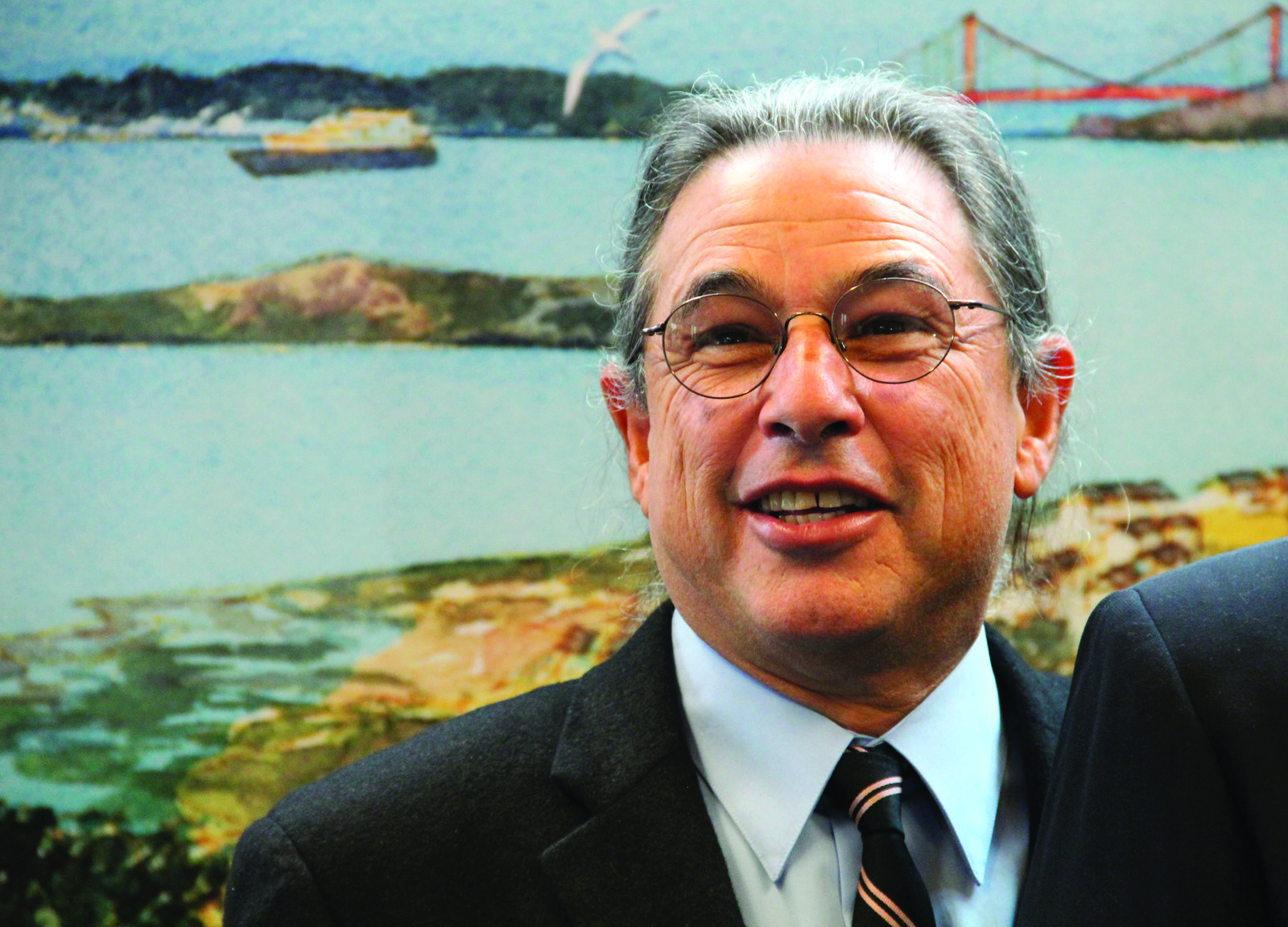 Posted at 10:02h in News by Pulse Editor 0 Comments

Editors Note: Jeff Ritterman, 64, is a retired cardiologist and former Richmond City Council member. Ritterman was a driving force behind Measure N, which would have imposed a city tax on sugar-sweetened beverages. Otherwise known as the “soda tax,” the measure was voted down in last November’s election.

Richmond Pulse: Where is the “soda tax” idea today?

Jeff Ritterman: The soda tax, on the state level, has been introduced by Senator Bill Monning from Carmel, who’s an old friend of mine. It’s Senate Bill 622. It… along with a whole host of other tax bills, [was] held back and will be reintroduced in 2014. So it’s alive and well and there’s an infrastructure of a few of us who have started to work on the campaign. It’s being sponsored, the bill, by California Center for Public Health Advocacy, and that’s Dr. Harold Goldstein. He’s just absolutely excellent in public health advocacy and he’s kind of leading the effort. And Bill Monning… you couldn’t ask for a better leader on the state level. Monning was a lawyer for the farmworkers. He and I and Charlie Clements formed the Salvadoran Medical Relief Fund back around ’83, I guess, maybe ’82, ’83. He was executive director for International Physicians for the Prevention of Nuclear War when they won the Nobel Prize in 1985. He’s just a terrific person and we really couldn’t ask for a better person on the political level to lead it.

The last polling showed that when the money [from the proposed tax] goes for children’s health — which in SB 622 we mandate — the California electorate is in favor by close to two thirds. So we’re very encouraged by that.

There are a whole host of things happening on city and county levels. There’s interest among some members of the Board of Supervisors in San Francisco and there’s interest among Berkeley City Council members. Alameda County is talking about it; San Leandro is talking about it, and San Mateo County. So you know, it’s an idea that continues to be alive and pick up steam.

As the science continues to build up, it continues to show that sugar-sweetened beverages are the number one cause of childhood obesity, which then leads to diabetes and loss of life. And one thing I think we haven’t stressed enough is the oral health problems that these sugar-sweetened beverages are causing. And not only here, this is globally. I have a friend who teaches at a medical school. She’s in Ecuador right now on an oral health project. When she was in the Peace Corps in Ecuador some 40 years ago, all the kids had great oral health. And [now], because of the introduction of Coca Cola and Pepsi Cola and all the others, they all have rotten teeth. It’s just really atrocious and a problem. So you’re going to see a lot more advocacy by the dental societies.

It’s an idea that’s not going to go away.

RP: There is speculation that you will run for Mayor of Richmond. Are you considering a run in 2014?

JR: No, I’m not. I have no thoughts of running for mayor or any other elective office in Richmond, or anywhere else at this time. I’m really focused on health and what I can do to make Richmond a healthier place. I’m also focused on the issue of climate change and transitioning out of fossil fuels. I think that’s becoming a crisis. Especially living in Richmond with a very good refinery and that issue being a hot topic of discussion, I think there’s an issue there for us to discuss. Also, if we were to transition out of fossil fuels — which I think is a must, or certainly change the way we use them – [how] would [we] replace the $40 million that the City now gets from taxes from Chevron? I think that’s a very serious question for us to be talking about. I’m personally involved in some economic development projects right now to really try to consider how to fill in that gap.

RP: What are some of the big issues of our time — health, social, environmental issues — that you think the public may be asleep on?

JR: One big issue the public’s asleep on is the corrosive nature of rising income inequality in terms of health and social wellbeing. And for background information you could go to www.equalitytrust.uk.org and their book is The Spirit Level. Basically, as a country distributes its income more and more unequally — and we’re more unequal now than we’ve ever been since we’ve been recording this, which started in 1917 — a couple of things happen. One is that trust breaks down because people correctly perceive that we’re not all in the same boat. Some people are living behind gated communities and other people don’t have enough. So once that breaks down, social cohesion breaks down, then everything gets worse. Life expectancy suffers, infant mortality suffers, child mortality suffers. Things you wouldn’t even think of are related — like how much a country recycles or how fat we are, how many prisoners we have or how many teen pregnancies. Or how much drug abuse or how well our children score on math or science tests. All of those things get worse when we get more unequal.
I think that’s invisible to most people. So that’s one [thing] that’s not on people’s radar, and it really needs to be. It’s totally corrosive to the political process, and you can see it in Richmond with Chevron’s big dollars, you know, trying election after election, sometimes successfully, sometimes not, to buy the election and to curry favor. It kind of destroys any real sense of democracy, and you see that on all levels.
You have a guy that’s supposed to be progressive in the White House and he can’t stand up to the Keystone Pipeline even though our children’s future is at stake. So that whole concentration of wealth and power and income is… It’s gotta be on everybody’s agenda.

RP: Sen. Dianne Feinstein has said she thinks National Security Agency leaker Edward Snowden is guilty of treason and not a whistle blower. What’s your opinion on the NSA leak controversy?
JR: I think Edward Snowden is a hero. He is his generation’s Daniel Ellsberg. He ought to be given a medal and Obama and his administration should be ashamed for spying on innocent people. It’s wrong to spy on innocent people and the Obama administration should apologize.

RP: What’s your take on The California Endowment’s investment in Richmond — do you think it’s making a difference?

JR: I highly respect The California Endowment’s Healthy Communities Project of which Richmond is one of 14 beneficiary areas. The only part of TCE’s investment in Richmond that I really know about in any real depth is the Richmond Health Equity Partnership (RHEP), which I am very impressed with. The RHEP is a partnership of the city, the county and the school district all working together to reduce health disparities in Richmond. I have attended many meetings of this partnership and found the work inspiring. The city is pioneering a Health in All Policy Ordinance as its contribution to the partnership. The school district is furthering its work on Full Service Community Schools and the county is providing health indicators that can be tracked to determine if interventions are making progress or not.

Shasa Curl and Gabino Arredondo are leading the city’s effort. Meredith Lee has done a lot of work on the Health in All Policies Ordinance. I’m very impressed with all of them and they each have done wonderful work.

I believe TCE’s investment in Richmond is already making a difference. This one investment for ten years can be a catalyst for positive transformational change in Richmond. Dr. Robert Ross, the CEO of TCE is focused on finding effective strategies to improve the lives of boys and men of color. This focus is very much in sync with what Richmond needs to do to be successful as a city. This synergy between TCE’s focus and the city of Richmond’s needs, will hopefully lead to successful interventions.