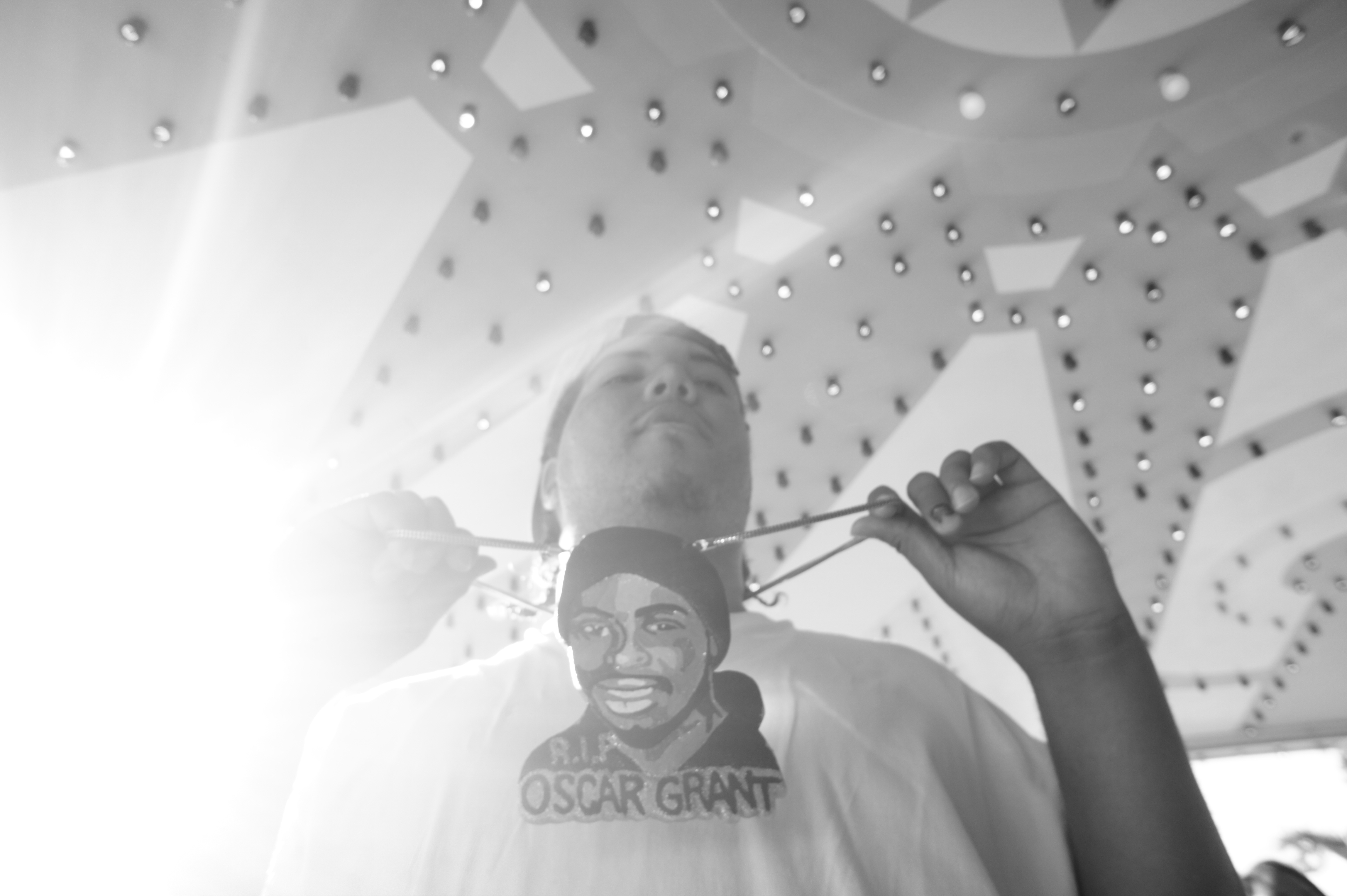 11 Jul Fruitvale Station the Movie: Will the World Feel it Like We Do in Oakland?

OAKLAND, Calif. — The crowd let out a monstrous applause just before the private screening of Fruitvale Station began inside Oakland’s Grand Lake Theatre. The majority of the audience then turned away from the screen, toward the back left corner of the room to honor Oscar Grant’s mother. I saw her acknowledge the crowd with a wave of her hand.

The movie opens with the footage of Oscar Grant III being shot in his back at pointblank range by a BART transit officer on New Year’s Day 2009 on the platform at Fruitvale Station.

The movie then backtracks, to tell the story of the 24 hours that lead up to Grant’s death: a turbulent series of events that depict Oscar as a father, a friend, an unemployed weed-smoking ex-convict, and a son who obeyed his mother’s wish that he take the train instead of driving on that fateful evening.

Watching the movie, Fruitvale Station, in Oakland– it was like something out of a movie.

I worked these streets as a journalist during the Oscar Grant protests in Oakland. I wrote about the court case in Los Angeles. And during an interview, I once asked former Oakland Mayor Ron Dellums about the possibility of renaming Fruitvale Station “Grant Station.”

That was during the summer of ’09. Four years later, this story has hit the big screen.

Lead actor Michael B. Jordan, who gained notoriety in his role on the hit series, “The Wire,” and Academy Award winning actress Octavia Spencer, were two names that lent Hollywood credibility to the project. And their performances did nothing but garner more respect.

And what makes the story even better is director Ryan Coogler, who grew up in Oakland and Richmond.

They, plus many more, were in the house for a star-studded Oakland affair.

I sat in a row with two cameramen from the local Fox affiliate. On the other side of the duo was Oscar Grant’s mother and sister in-law. To my right were three friends of mine, artists and activists, who had all been involved in the Oscar Grant saga in one form or an other.

The familiarity in the room at times made it feel like we were watching old family videos.

When the movie showed people smoking on the BART train, one friend whispered: “We used to do that.”

When the movie played Mack Dre’s “Feelin’ Myself,” another friend said: “Ah, that still SLAPS!”

And when the main character repetitively said “Bruh,” adding drama to the scene of a dog dying in his arms, I thought to myself: “They’re overdoing this Oakland-lingo…Bruh.”

But I’d much rather see a movie that is overly representative of the real situation than something that is completely manufactured in a studio in Hollywood. This wasn’t Coach Carter. I’m glad they filmed it in Oakland, and sprinkled in some local talent.

I wasn’t completely impressed with the camera work, namely the action shots. There were at least two instances of long-walking shots that could’ve been more appealing had they been a series of short shots. They looked like documentary film shots. But maybe that was the idea — to tell a real graphic story in a real graphic way.

The usage of digital graphics to depict text message communication was ingenious. Everyone knew about the role the cell phone played in the Oscar Grant story, even the guy in the front row of the movie theatre, the one whose phone rang while the movie was playing.

The theatre lit up when local celebrities made guest appearances on the train, in the store, at the hospital. Even the brief cameos resulted in some sort of reaction.

The two-story Egyptian style neoclassical theatre served as a community gathering ground, a place where people could share a couple of light hearted laughs, a few romantic awwww’s, and the solemn silence of the final moments of Oscar Grant’s life; this time not on a cell phone screen, but on a silver screen.

The well-written emotional rollercoaster is a great depiction of an event, a case of police brutality.

When this movie hits theatres everywhere, the world will know of Oscar Grant’s story — the only question is: will they feel it the same way we did in Oakland? I hope so.