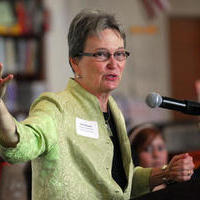 12 Jul Q&A: A Year After Refinery Fire, No “Culture of Safety” at Chevron”

Editor’s Note: Last August, an explosion and fire at the Chevron refinery in Richmond, Calif. sent a vaporized plume into the sky and into surrounding communities that reportedly sent 15,000 people to emergency rooms. The fire and toxic release sparked both state and federal investigations that traced the root-cause to corroded pipes, and found that the company failed to fix the problem. A state working group on refinery safety that formed after the Chevron fire released its recommendations yesterday on how to increase public and worker safety and strengthen emergency preparedness in the event of a future disaster. One state policy currently being debated in Sacramento is Senate Bill 691, authored by State Senator Loni Hancock (D-Oakland). The bill would raise civil penalties for one-day air quality violations, such as the Aug. 6 Chevron refinery fire. Nicole Hudley spoke with Senator Hancock about the status of safety reforms.

Richmond Pulse: Why did you personally decide to address this issue with this legislation?

Senator Loni Hancock: After the fire at the Richmond Chevron refinery fire last year I really committed myself to doing everything that I possibly can to make sure that that never happens again. The more I found out about how it happened the more inexcusable it seemed.

The California Occupational Safety and Health Authority (Cal-OSHA) did an investigation, and also the federal Chemical Safety Board did an investigation, and one of the things they found out was that Chevron had known for over 10 years that the pipes were corroded. Their own engineers had asked for the pipes to be replaced, and something called the Business Impact Committee over-ruled the engineers.

A company making billions of dollars of profit every year did not, for over 10 years, replace corroded pipes and then you have this explosion and fire that could easily have killed people. We’re lucky that it didn’t, but that had very detrimental effects on the community.

LH: It turns out that the largest possible fine for this [for a single-day release of air toxins that harms a considerable amount of persons, property, and businesses] happening is $25,000 and for a company making billions of dollars in profits, a $25,000 one-time fine, doesn’t make any difference. It’s the cost of doing business. My bill would raise the fine to $100,000 for one day, [for] very serious incidents that affect the entire community with toxic pollution.

NAM: At this point what are the odds that SB 691 will get signed into law, given there is industry opposition to the bill?

LH: The bill has now passed out of the State Senate. It’s over in the Natural Resources [Committee] in the Assembly. It’s being opposed by the oil refineries, who have a great deal of power in Sacramento. I am talking to members [of the Legislature] about it. I am very hopeful that the bill will pass in the State Assembly and that the Governor will sign the bill.

RP: How have other legislative and budgetary actions improving refinery safety fared in the Capitol this past year? Is the public any safer?

LH: I also chair the subcommittee on the budget committee that deals with the Department of Industrial Relations, which oversees Cal-OSHA. We investigated the state funding for Cal-OSHA and found out that it was inadequate. In fact, Great Britain, which has about the same number of oil refineries as California, has 100 inspectors. California has seven. One of the things we did through the state budget was increase the regulatory fees to add 17 new inspectors to Cal-OSHA. That may not be enough, but it is an increase of about 300-400 percent.

RP: What would you like to see Richmond residents do to help ensure the Chevron refinery is operating safely?

LH: I think that making their voices heard to their city council, to their state legislators, to the company, are important things to do. It keeps the issue in front of the public, because we have not solved it. We have not achieved a culture of safety at the Chevron refinery.

RP: There has been talk about the Chevron refinery currently using tar sands and supporting the effort to start the Keystone Pipeline project, as it could bring significant revenue to Richmond. Do you think the Keystone pipeline would benefit Richmond residents?

LH: I think that Richmond residents are citizens of the region and the world. We know that tar sands are the dirtiest oil there is. I’m one of many people who do not want the Keystone pipeline built, and do not want to see us embark on a shale oil-fracking-tar sands approach to our energy challenges. I think that renewable, sustainable energy is the way we ought to go, and I’d like to see oil companies moving in that direction.