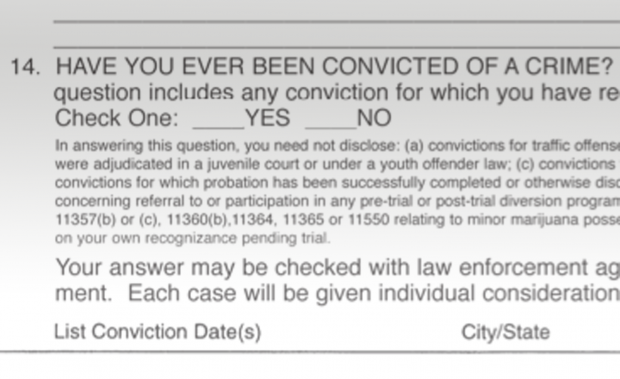 The Richmond City Council voted 6 to 1 to prohibit private contractors that do business with the city from inquiring about past criminal convictions on printed and on-line job applications.

The new ordinance expands on a 2011 law that removed the question about past criminal convictions from city job applications. Exemptions will be made for “Sensitive Positions” that will be submitted to the City Council for adoption by resolution.

“Ban the Box” is a campaign that seeks to remove the question about felony convictions from job applications.

Richmond Councilmember Jovanka Beckles, who sponsored the ordinance, said this is the of the many ways government can level the playing field for job seekers who have served their time, yet still encounter obstacles to establishing a life after prison.

“Laws have [historically] been on the books to oppress people of color,” said Beckles. “Now we have the new Jim Crow and the prison system that makes a profit.”

The lone dissenting vote was cast by Councilmember Tom Butt.

“The racial aspects are apparent, I think we all understand that,” said Butt. However, he added, “Most of the (felony conviction box) ordinances across the country are all fairly consistent with each other and fairly consistent with (the guidelines established by) the Equal Employment Opportunity Commission. This Richmond ordinance pushes it way beyond what was done before,” he said.

Butt, a long time business owner, said he has hired hundreds of people in his over 40 years in business.

“There are people who are career criminals and not somebody that you want to put to work in your business, and employers should have discretions. This (ordinance) takes all that away, and that’s where I departed from some of my colleagues.”

While Butt said the ordinance was proposed with the best intentions, he believes “there is a high level of naivety on this.”

Butt insisted Richmond would be better served by a law that is consistent with other Ban the Box ordinances implemented throughout the country.

Beckles disagreed, and said Butt is just playing into public fears that are unfounded.

“I dont think he sees it, because of the [white] privilege that is afforded to him,” said Beckles. “He doesn’t get it.”

“This whole notion of discretion is a loophole… It’s not there to protect those who have been oppressed,” she added.

“I was disappointed, but I will live with it,” said Butt about the new ordinance.