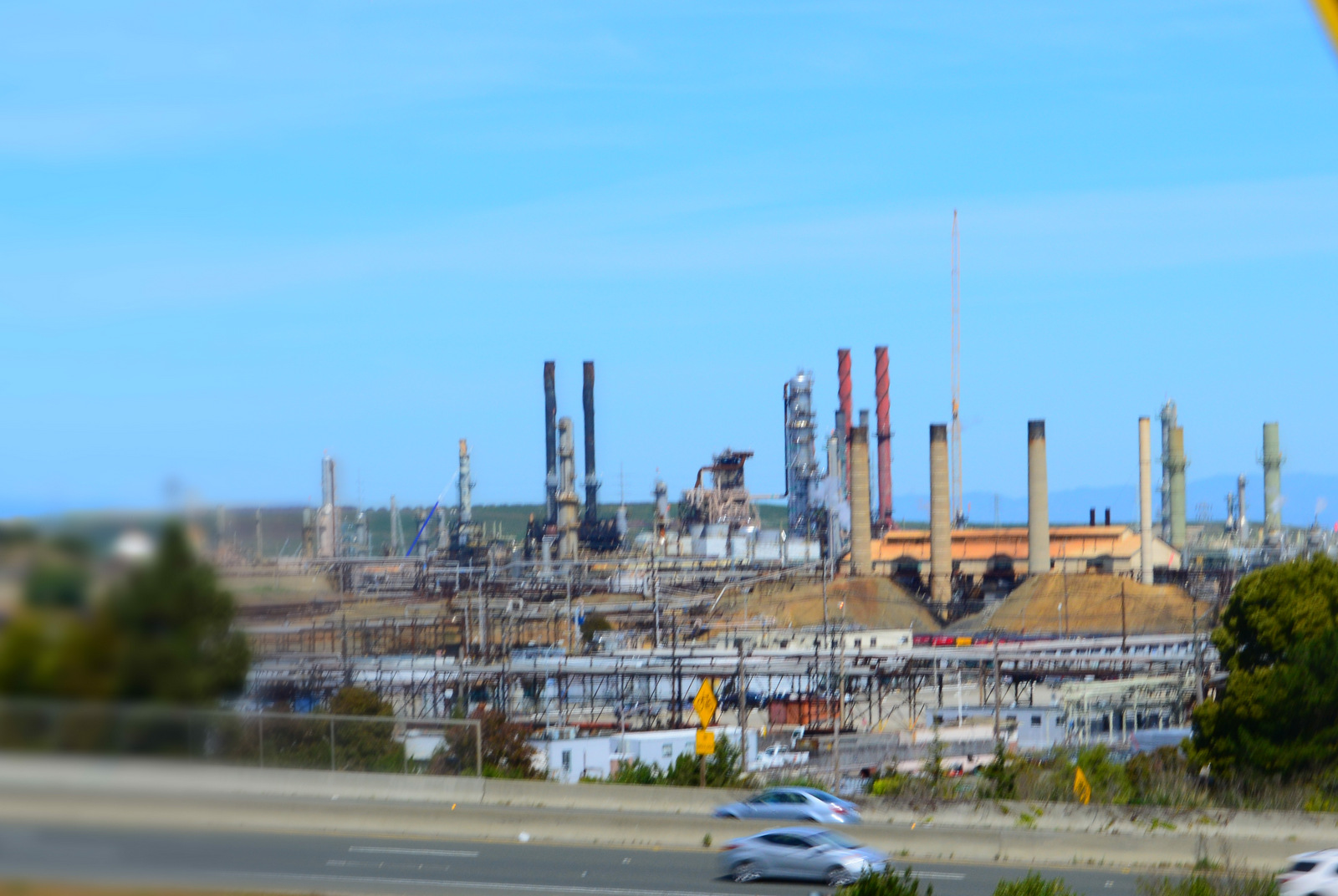 06 Aug Richmond and Chevron: A Story of Love and Hate

For over 100 years, the histories of Richmond and Chevron have been intertwined, to the extent that they sometimes seem like reflections of one another — rival siblings who share the same DNA yet can’t stop squabbling.

Last summer the relationship was strained once again, due to the Chevron refinery explosion (that was later deemed preventable by investigators) that stoked political fires that were already running hot, between Chevron backers and environmentalists inside City Hall. The questions being raised on both sides have been asked many times before: Is Chevron paying its fair share? Should the city risk penalizing its greatest source of employment and revenue? What would happen if Chevron decided to pick up and leave? Does the corporation wield too much influence over local politicians? These questions allude to a power imbalance between Richmond and Chevron, yet the discussion rarely focuses on the fact that the city and the company depend on one another.

There is a commonly held misperception that Chevron, once known as Standard Oil, built Richmond. However, Richmond’s formation and eventual emergence as an industrial powerhouse in the mid twentieth century predates Standard Oil. Richmond’s transformation from an agriculture-based community to a modern industrial city began in the late 1880’s as American land developers purchased and converted the Spanish California ranchos into informal blocks, much like the Spanish before them transformed the natural landscape that was home to the Huichin Indians of the Ohlone tribe, into farmland.

In 1900, Augustin S. Macdonald, an Oakland real estate developer, purchased the eastern flatlands of Richmond after he convinced the Santa Fe Railroad Company to establish a terminal here. Macdonald subdivided the land into lots and sold them. The subdivision created a block plan and a new thoroughfare, Macdonald Avenue. Because of their proximity to the railroad terminal and the accessibility of Macdonald Avenue, the for-sale lots became desirable. It was at this time, in 1901, that John D. Rockefeller brought Standard Oil to Richmond. Rockefeller’s company was already embroiled in controversy, over accusations that it had monopolized the oil industry in violation of the Sherman Antitrust Act. The refinery in Richmond was just one of thousands operated by Standard Oil across the country.

The Standard Oil refinery began producing oil on the Fourth of July, 1902. The refinery grew steadily, eventually occupying nearly 1,800 acres of land and becoming the largest employer for the area. The presence and revenue from Standard Oil and the Santa Fe Railroad ushered in additional industries along Richmond’s shoreline.

The huge amount of revenue being generated by the city’s new industries necessitated a functional city government, and entrepreneurs and landholders led efforts to establish a political leadership in Richmond. Their actions led to the creation of business associations and a government body that acted in conjunction with corporations to lure more industries. In less than ten years after its incorporation, Richmond’s population grew from 2,000 in 1905 to around 10,000 in 1912. The quick growth infused the city with confidence. Richmond city and business leaders declared themselves “The Pittsburgh of the West,” and U.S involvement in World War I propelled the refinery to produce more fuel products than ever before.

Yet Richmond had yet to become the modern city it is today. The city’s population was comprised of mostly longtime California residents and a smaller number of European immigrants who came to work in the industries. But as the number of jobs grew, so did the number of minority groups: African Americans, Japanese, Italians, Chinese and Mexicans. These ethnic groups occupied the lower rungs of industrial job ladder, often living in unsanitary and unincorporated areas of Richmond. However, race relations in pre-World War II Richmond were placid. Minorities were able to enjoy a life in Richmond, as long as they respected the racial and ethnic hierarchies.

The World War II mobilization effort was yet another boon for the Richmond economy. Jobs in Richmond’s shipyards attracted thousands of newcomers, many whom were part of a Southern migration to the West Coast. Richmond’s population soared from 23,000 in 1940 to an overwhelming 100,000 in 1944. Newcomers also secured jobs at the refinery, helping Standard Oil meet the wartime demand for oil. The company was even honored by the U.S. government for its role in the military effort. When their interests were aligned, both Richmond and Standard Oil thrived. The Kaiser Shipyards may have overtaken Standard Oil as the city’s biggest employer, but the nation’s thirst for oil and the company’s monopolization of the industry would help it survive and prosper, long after the war ended.

Yet it was after World War II, when Standard Oil became Chevron, that tension between the company and city residents began to grow. Chevron was Richmond’s largest employer in the post-war era. Innovations like the development of gasoline additives to keep carburetors clean in 1954, kept the company profitable. Meanwhile, most of the migrant African Americans and ethnic minorities who had come to Richmond for wartime jobs stayed, but were relegated to living in segregated public housing projects and neighborhoods with high unemployment numbers. Losses experienced by other industries, white re-location and disinvestment in the central city all had a negative impact on the African American and minority communities now living downtown.

De-regulation and unfettered privatization was the trend in the decades to come. Like many other industrial cities, Richmond experienced gradual disinvestment and overall job loss, while Chevron itself enjoyed unprecedented success. Downtown Richmond was now dependent on the success of small businesses, while Hilltop Mall and other shopping centers detracted from downtown’s economic power.

By the 1980’s, Richmond was mirroring another national trend. High rates of drug abuse, in the form of crack cocaine, emerged in the city’s poor minority neighborhoods, further crippling those populations. In contrast, the 80’s represented the pinnacle of Chevron’s success. By then, the refinery had expanded operations into processing high sulfur crudes, building storage tanks for marine cargos and developing refining processes to increase its lubricating oil stock. At this time Chevron also introduced Techron, the first additive developed for vehicles running on unleaded gasoline. The diverging economic trajectories of Chevron and Richmond set the stage for larger contestations in the 1990’s.

Responding to growing economic inequity and environmental injustice, local Richmond activists began to publicly challenge Chevron, beginning a discourse that continues to this day. According tot the West County Toxics Coalition, between 1989 and 1995, there were 304 accidents at the Chevron refinery including fires, spills, leaks, flaring and toxic gas releases. Pressure from environmental groups occasionally forced Chevron to acknowledge their mishandling of the refinery, in one instance after an explosion on March 25, 1999 that sent hundreds to the hospital.

Today, the relationship is arguably even more intense due in part to the growing presence of progressives in local government, including Green Party mayor Gayle McLaughlin, who has publicly criticized Chevron for a lack of transparency. From 2009 to 2011, Chevron and the City of Richmond were entangled in a legal battle over Chevron compliance with environmental regulations related to an upgrade of the aging refinery. Things went off the deep end last year, when on August 6 a fire erupted at the refinery. The fire put the entire city on lockdown from 6:15pm to 11:15pm and sent 15,000 people seeking medical treatment. The City of Richmond is in a position to legally sue Chevron for damages, and the total economic impact is still being studied. A recent budget report issued by the City of Richmond and West Contra Costa Unified School District showed estimated property values in the city declining by 14.6 percent for 2013-2014. Richmond City Manager Bill Lindsay has estimated it will cost $6.1 million dollars in tax revenue to cover the decline, which is at least partially attributable to a decrease in the refinery’s value post-fire, as reported by Contra Costa County Assessor Gus Kramer.

While it remains unclear what the future holds for this century-old relationship, there can be no doubting that Richmond and Chevron stand at a crossroads. Will both sides be able to muster up the energy to see the relationship move forward into a new era? And what will that era look like? Only time will tell.