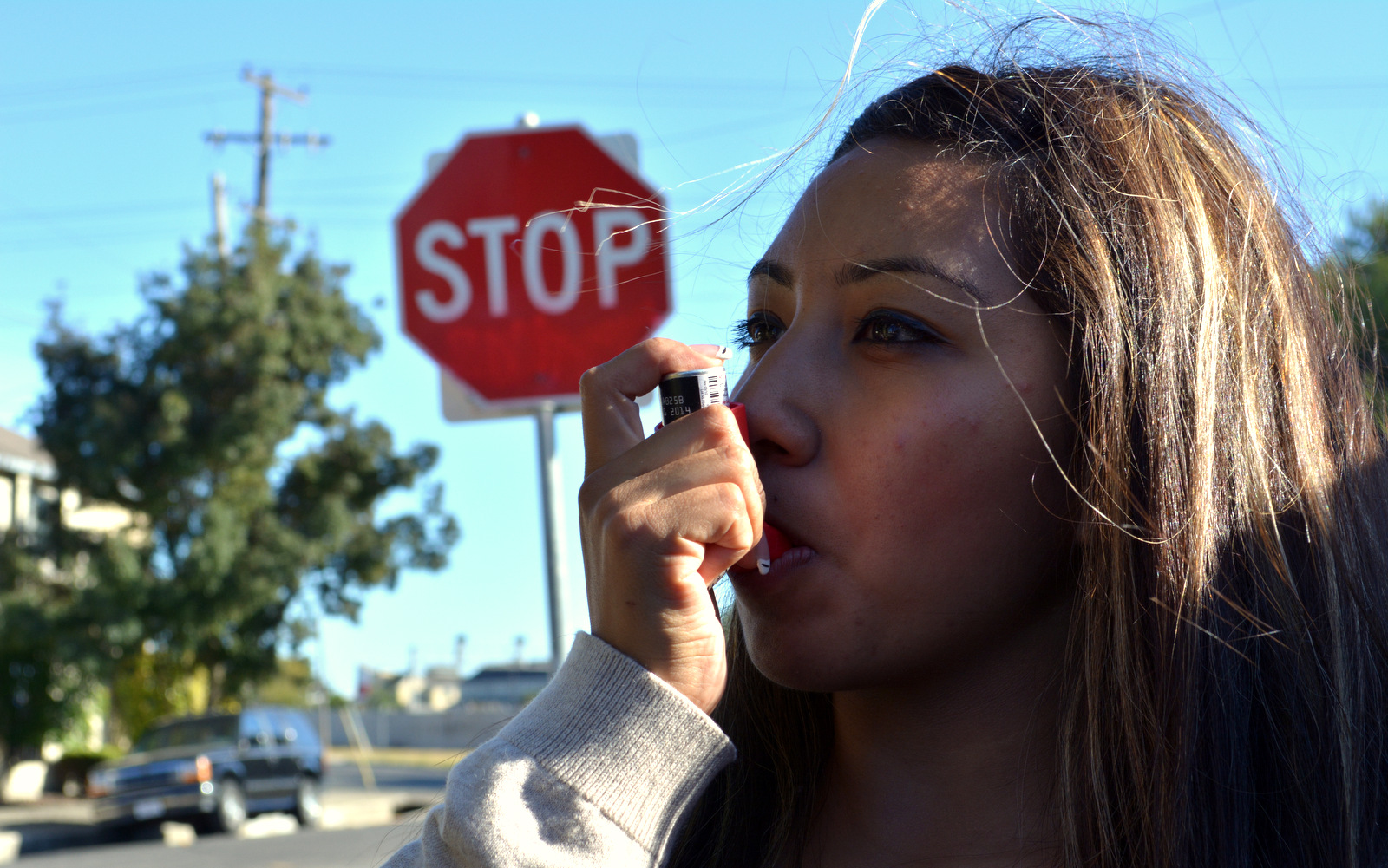 01 Sep In Asthma Plagued County, a Move Toward Prevention

Richmond High School senior Maribel Navarro remembers what it felt like to have to go to the emergency room every time she had an asthma attack, which was often. “When I was little, I’d get my asthma really bad. I would go to the hospital in the middle of the night. It (was) hard to try to calm down… you don’t know how to react,” she recalls.

Navarro, 17, who has lived in Richmond her entire life, remembers thinking to herself, “I can’t breathe, what else can I do?”

Asthma attacks like the one Navarro describes send tens of thousands of children in California to the emergency room every year. But in Richmond, a city with a particularly high prevalence of asthma, residents will soon have another option. A new asthma treatment clinic, the first in Contra Costa County, is slated to open in September at the West County Health Center in neighboring San Pablo.

The new clinic aims to reduce the number of asthma patients using emergency rooms, by helping to develop consistent management plans and a more preventative approach, with an emphasis on self-management.

The kick off will be September 16 with the first community asthma self-management class. The free classes will be taught by Licensed Respiratory Care Practitioners.

The emphasis on prevention is being driven in part by changes to the health care system that are taking place under the Affordable Care Act (ACA), or Obamacare, which will be fully implemented on January 1, 2014.

“This clinic is not directly connected the ACA now, but it is preparing us (for what) the ACA will be increasingly requiring,” says Wendell Brunner, Director of Public Health for Contra Costa Health Services. “The ACA will move away from paying providers just for seeing patients, [or] fee for service, and more toward paying providers for health outcomes and keeping patients healthy. This is not only more cost-effective, it is clearly better for patients too.”

In Contra Costa County, approximately 191,000 children and adults have been diagnosed with asthma. The prevalence of childhood asthma in Richmond is 17 percent – more than double the national average and higher than the state average of 14.8 percent, according to a 2009 health survey of Richmond conducted by Communities for a Better Environment.

Another study from 2006 by the Contra Costa Asthma Coalition confirmed that in California, African American and Latino children are hospitalized for asthma at higher rates than  other children. Contributing factors cited include poor air quality that children living in low-income neighborhoods are often exposed to, limited access to health care, and a lack of asthma education programs.

“That’s one of the reasons that asthma’s a big issue for us,” says Brunner. “It’s important throughout the county but it’s also particularly a health equity issue. It impacts our low‑income communities, and it particularly impacts our youth — it’s just another barrier to them being successful. [It’s] not fair.”

Richmond is also home to the Chevron refinery which has long been blamed by many in the community for high asthma rates and other respiratory problems. Two days after a major explosion and fire at the refinery last year, Navarro, who lives about 3 miles from that site, was back in the emergency room.

“I think the big problem with Chevron is probably not its general emissions, but the releases that it has, and that includes flaring,” says Brunner. “So things like the fire, that produces an enormous amount of particulate matter. We’ve done some surveys of the hospitals [and] we know that that triggered off people with asthma or people with underlying lung problems.”

When it come to treating patients, Janyth Bolden, Cardiopulmonary Director at Contra Costa Regional Medical Center, says there are no asthma-specific health services in many underserved areas of the county:

“A system to receive ongoing services and education so (people with asthma) will know what to look for, do some self assessment and learn how to manage their own breathing problems,” explains Bolden. “You have those things in place for people that have insurance.”

Bolden hopes the new clinic will help reduce emergency room visits by 25 percent and hospitalization by 15 percent or more.

County officials say they want to provide asthma education to all residents of Contra Costa County, not just to the patients, and have chosen the Richmond area as their focal point to start off because it is still badly underserved.

“One of the reasons we’re trying to do a number of other things around asthma in West County,” says Brunner, “is because community groups and the City of Richmond and other groups in Richmond, are really pressing the health department to address asthma and to do something about it. And they’re right.”

If successful, officials hope to replicate their efforts in other areas of the county over time. Another asthma clinic is already being planned in the City of Pittsburg, in East Contra Costa County.

Brunner stresses that there is no magic bullet to reducing health risks associated with asthma in West County — a number of things need to be done. The first being, when people are sick, they need to have access to modern quality, evidence-based asthma care.

“One of the things we have to do is make sure that all the kids and adults in West County who have asthma get the most modern medical treatments.”

Second on the list is education regarding prevention and treatments. There is currently no cure for asthma but most care providers agree that managing one’s asthma is crucial to avoiding asthma attacks and improving one’s quality of life.

“(Asthma) medicines aren’t necessarily easy to use. A lot of the doctors who prescribe them have never used them. People need to be educated on how to use these properly. We need to have a component so that patients with asthma can be trained and educated about their disease, because they’re the ones who are living with it every day,” explains Brenner.

There is also the issue of asthma triggers that can often be found in people’s homes.

“Looking at cleaning up the molds, getting rid of some kinds of carpets that hold the dust and the asthma triggers — there’s a variety of things that can be done in the homes to make it better for people with asthma,” says Brenner.

Making those types of changes in the home made a huge difference for Maribel Navarro, says her mother, Rosaria Meza.

“Since we took the carpet out, we put tile in all the rooms. (We don’t have) no cats, and we just have a few plants.”

Even certain flowers can be a trigger for her daughter’s asthma, Meza says. “It depends what kind of plants we have.”

The changes have brought relief to Navarro and to her mother, in more ways than one.

“Almost every week in the nighttime, going to emergency. Plus the money, because every time you go to emergency, you pay. I used to pay $50 [or] $55, and now it’s more.”