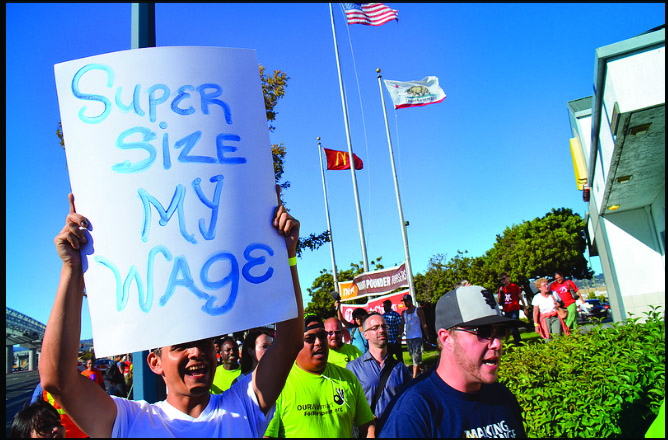 Posted at 12:44h in Business, Youth by Pulse Editor 0 Comments

Editor’s Note: On a nationwide day of strikes on August 30th, fast food workers in 60 cities across the country marched for higher wages, including in Oakland, where hundreds of workers and their supporters demanded a living wage of $15 an hour and the right to unionize.

Major fast food corporations have long benefited from hiring young employees on the cheap. But nowadays, youth aren’t the only ones taking fast food jobs. There are workers of all ages: seniors, parents and young adults, who rely on these jobs for their bare necessities.

With the minimum wage in California currently at $9 an hour, it would be insane to think these folks are earning a decent living. Some have to rely on public assistance, and still struggle to make ends meet.

At the protest that took place near the Oakland airport, I spoke to some local fast food employees, including Ryan Shoots, who said working for McDonald’s is just not cutting it.

“I’m honestly not making enough to live right now,” said Shoots. “I’m either choosing between food or getting to work, and usually it’s getting to work. So I usually starve for a few days.”

When I asked him why he doesn’t just eat at his job he replied, “I’ve eaten there so many times, that it just gets me sick. I’d rather starve.” Now, this a kid in a lose-lose situation. McDonald’s made billions last year and you mean to tell me, they can’t provide this boy with a bus pass?

I also spoke to Shoots’ roommate, Brian Pointing, 20, an employee at the same McDonald’s in Fremont.

“I was making decent money at first but then they started cutting my hours,” he said. “Now I can barely afford to pay rent and feed myself.”

When asked if McDonald’s offered any opportunities for advancement, Pointing added, “After a year you can become manager but the raise is only fifty cents more per hour, and honestly that’s still not a decent wage.”

Samaj Ransom, an employee at Jack in The Box, is one of the many who are fed up with the industry’s corrupt ways.

“We live in the Bay Area, one of the highest priced places to live in the nation: gas is high, groceries is high, and we can’t do it off $8.50 an hour.’’ I could hear the seriousness in his tone and the anger below his chest. Surrounding him were people with fists raised high, picket signs in their hands, their faces filled with hope and their eyes longing for change.

James Dickerson, an employee at Little Ceaser’s Pizza, feels he deserves more respect from his employer.

“I’m not a child. I need a car,” says James. “I need to pay rent and I can’t do it off one income. I get about thirty-eight hours a week and pay $500 for rent, and my partner pays the other half.’’ When asked why he doesn’t take up a second job, he said, “I go to school and work full time. There’s really no time for another job.”

Like pimps, fast food corporations keep people working long hours for low wages, while all they do is collect. When it comes to this industry, maybe having a job is more stressful and depressing than not having one at all.

People devote their lives to these companies, working day in and day out, accepting low wages, no benefits and disrespect, just to survive. If there’s a bright side, maybe it’s that this dirty secret has been exposed, and the corporations will no longer be able to hide behind a toy in a kid’s meal. They’ll have to deal with the truth, which is that they’re basically running sweatshops disguised as fast food franchises. These workers deserve a living wage and a chance to unionize, without fear. •