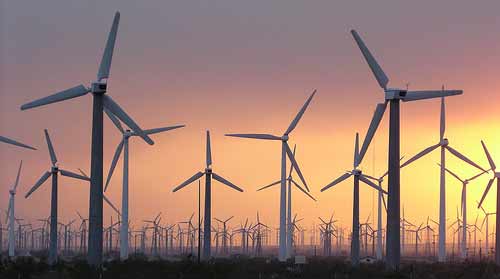 Editor’s Note: In 2002 the California legislature passed AB 117 allowing cities and counties to become electric service providers to residents in their jurisdiction. Known as Community Choice Aggregation, or CCA, today more municipalities such as San Francisco and Sonoma counties are exploring this option as a way to reduce carbon emissions that drive global warming by increasing the generation of renewable energy and giving community members more choices. But, after more than a decade, there’s still just one functioning CCA in California: Marin Clean Energy (MCE). (In July, Richmond became the latest city to sign on to Marin’s program.) KALW reporter Laura Flynn met with Marin Clean Energy to find out how CCAs will affect the energy landscape.

Mike Parker just joined MCE. He and his wife live in a small three-bedroom house on top of a hill in Point Richmond. Every morning before he heads to work, he does what many of us do: makes coffee and breakfast, showers, and dresses. All those activities use energy. And this is where things for Parker are a little different.

Walking down the spiral stairs from his living room into a small dark closet, Parker shows me a monitor — it’s watching his solar energy system.

“It basically tells us how things are going,” he says. “This is the thing which actually gathers information from the solar panels and feeds it into the computer.”

The solar panels on Parker’s roof provide most of the electricity needed to power his 1,800 square-foot home. Usually, the rest of it would come from PG&E, but since MCE expanded its service territory to Richmond, they have another option.

“We don’t cheat ourselves but where we can cut back, we do that,” he says. “We think that’s the most important thing and then after that the next thing is what is the source of the electricity and energy that you use.”

How do CCAs work?
We may not typically think that hard about how electricity reaches our homes. For most of us in the Bay Area it all comes the same way: through PG&E. The company sends us power from a blend of sources: mostly natural gas, nuclear, and large hydroelectric, plus about 19 percent from renewable energy sources. For a long time, its portfolio was the only one available. Then in 2002, the state legislature passed a bill known as AB 117 — Community Choice Aggregation (CCA).

“Basically it enables local communities to come together and purchase renewable energy and sell it competitively within their service area,” says Jamie Tuckey, the communications director for MCE, the state’s only functioning CCA.

Unlike an investor-owned utility — that’s what PG&E is — MCE is a not-for-profit government agency. So its revenue goes back into a reserve to fund more local renewable energy projects. Now, PG&E still owns all the infrastructure – the lines and poles that make our light switches work. But the community has more control over where the power that runs through those lines is sourced.

“Right now we have contracts with 11 different suppliers for more than 15 different power projects that are being built for our customers,” says Tuckey. “So we take care of making sure that there’s enough electricity being put on the grid for our customers and that’s separate from PG&E.”

About 99 percent of MCE customers choose the Light Green option — not exclusively renewables, but still more than twice as much as what they’d get from PG&E. Residents and businesses in the covered area have a choice: pay a little extra for a MCE package, or opt out and continue as a PG&E customer. A Light Green bill is about $1 higher than what’s average for PG&E; a Deep Green bill is about $6 higher.

Paying PG&E… for what you don’t use

Mike Parker’s August electricity bill totaled $3.98. He went with the Deep Green package. Between his solar panels and his CCA, he’s powering his house with all renewable energy. But that doesn’t quite account for all the money he’s spending. The bill also includes a monthly exit fee MCE customers have to pay PG&E for the energy it bought on their behalf. Parker is not a fan.

“It’s basically PG&E has got the state public utilities commission to allow them to charge any customer who leaves PG&E a regular fee to compensate PG&E for the fact that it had planned to have these customers and supposedly plan to buy, you know electricity for it,” he says. “We think it’s sort of outrageous. You know, no other area of the economy works that way.”

Jason King, a PG&E spokesman, says the fee ensures the area’s remaining customers don’t bear the cost of customers who left. “Basically what happens in some cases is we procure this power years in advance so when we have customers who then exit PG&E services to opt for a CCA we have to be able to make sure that our existing customers don’t have to pick up that amount,” explains King.

The fee issues highlight some of the risks involved with launching a CCA program. The San Joaquin Valley Power Authority was actually the very first entity to try and form a CCA, back in 2007. In 2009 though, it suspended its program, citing a tight credit market, volatile energy prices, and opposition from PG&E. In a letter to the state public utilities commission, the CCA officials said “PG&E’s marketing and lobbying efforts continue unabated creating obstacles and demands upon our limited resources.”

King from PG&E says, “We respect the energy choices that are available to our customers and we will continue to cooperate with local governments as they consider pursuing and or developing a CCA program.”

Though many communities still face major political, financial, and regulatory risks, projects are moving forward. Richmond residents started receiving MCE services in July. Councilmember Tom Butt calls the project “a no-brainer,” adding that the point of the program is to give people choices.

Before launching in Richmond, MCE worked with city and community organizations to inform residents about the switch — people were automatically enrolled, but could choose to opt out.

“I haven’t heard anything about this, but is that supposed to be a good thing?” says Sharon Key, one of several Richmond residents who didn’t know about the program, and still thought they were PG&E customers. Others who did know about it had already switched back to PG&E.

“I think that PG&E has been serving us very well right now and we think it’ll be just less expensive to stay with PG&E,” says Michael Hillegas.

Others though, were supportive. “When I received the information about it just the fact that it stated it was cleaner energy is why I went that direction,” says Madra Walker. “I haven’t noticed any difference. I haven’t actually paid any attention. I’ve not stopped long enough to even get online and get familiar with MCE.”

MCE now has about 125,000 residential and commercial customers. A group called the Climate Protection Campaign is launching another CCA in Sonoma County, which they hope will be up and running by early 2014. They’re mindful of what happened to the San Joaquin Valley Power Authority back in 2009. But since then the public utilities commission made changes to even the playing field. Those changes, plus MCE’s work, mean Sonoma may not go the way of San Joaquin.

This work was supported by a 2013 New America Media Energy Reporting Fellowship in collaboration with SoundVision Productions’ Burn: An Energy Journal.